By comparison, the SPEC amplifiers used in monaural mode (i.e. their best configuration) delivered perhaps better transients and microdynamics within a bigger soundstage. These Japanese class D amps really behave like tube amplifiers by standing on the warm side of neutral and adding a lot of air. Gold Note's soundstage remained more focused between the loudspeakers and offered less percussive impacts. But all other criteria like the quality of timbre, level of detail and noise floor were outstanding. I perhaps might occasionally have wished for a bit more power to make the IS-1000 even more convincing on dynamics and because realistic sound levels in my room only left about 15dB of headroom on the volume. Nonetheless, I never had the sensation of increased distortion. And obviously this integrated device isn't really targeted at driving speakers at 20 times its own price. 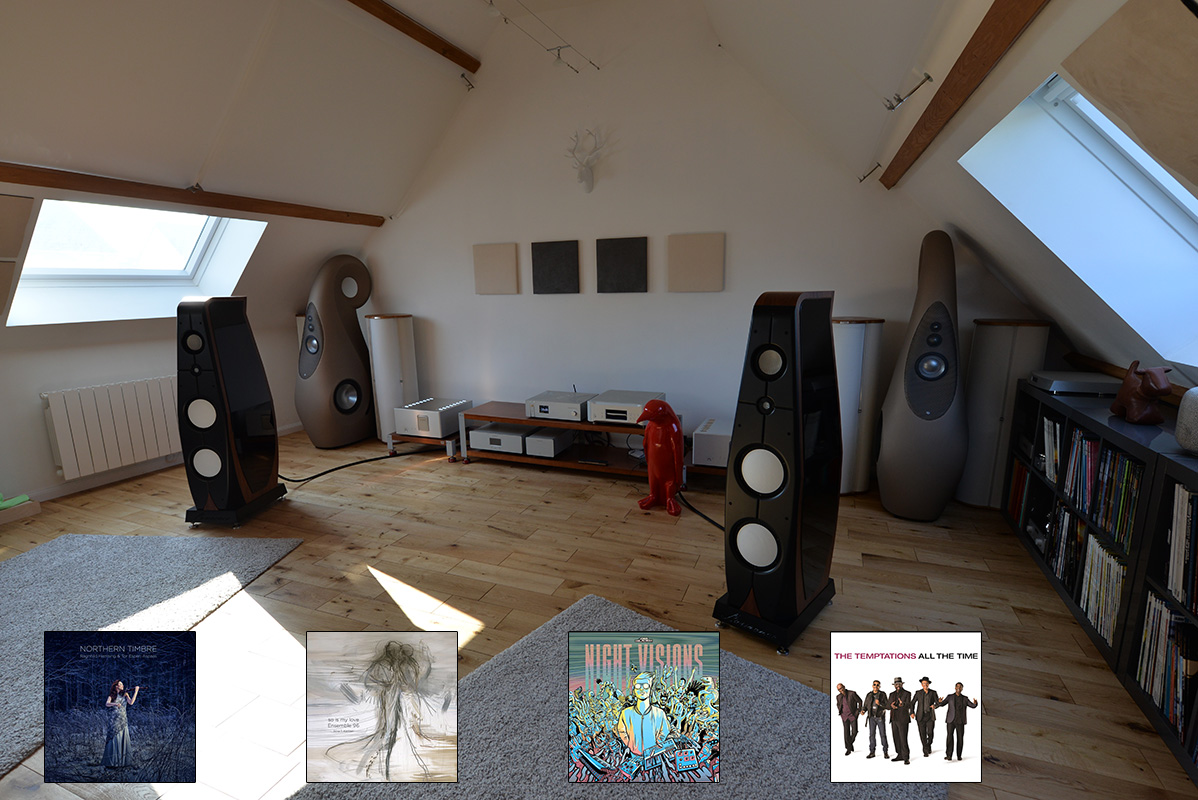 To get a better idea on what more realistic context might bring, I walked the IS-1000 downstairs into my living room whose minimalist system is based on a pair of Elipson Planet L coaxial speakers and Lumin's M1 all-in-one. The Elipson spheres are neither very demanding nor super friendly, in fact more of a downscaled proposal to the Lawrence Audio Penguin and Vivid Audio G1 Spirit. At 50/100wpc into 8/4Ω, the Lumin delivers a bit less than half the Gold Note's power. Whilst the Planet L's were perhaps scaled more appropriate for the IS-1000, the qualitative sound difference to the Penguin or G1 wasn't night and day. My impressions of the smaller system were quite comparable. 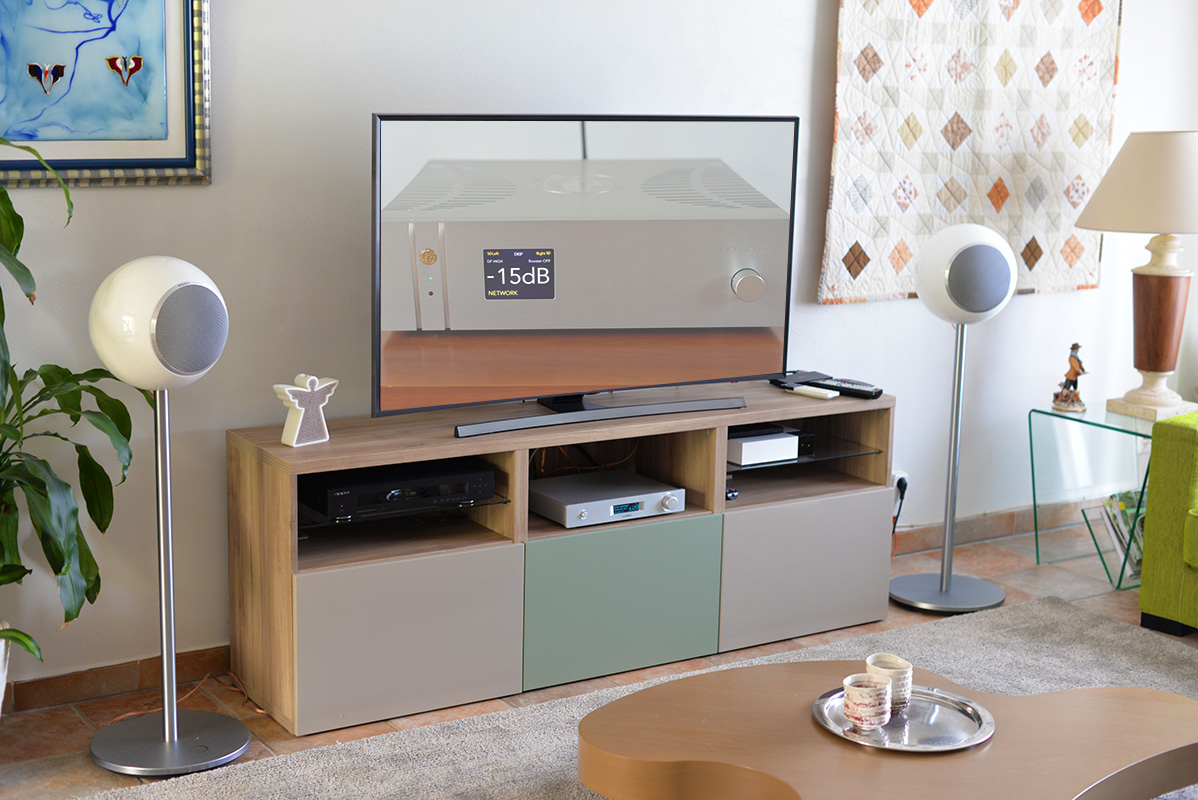 The Lumin M1 cast the wider image within a life-like atmosphere. The Gold Note offered more accurate timbres and a darker background but expressed the tamer dynamics. That mostly mimicked the usual confrontation of a class A/B versus fully digital amplifier. I thought both readings worthwhile but the Italian had the bigger power reserves and greater versatility over the M1's solitary RJ45 digital input. With the Planet's coaxial drivers, I achieved better results using the high damping factor whilst the Lawrence and Vivid speakers preferred (!) the opposite to surprise those who categorically pursue extreme damping. This sophisticated option was valuable and quite surprising. Bass boost on the Elipson added an interesting loudness effect whilst of course being completely counterproductive on my bigger loudspeakers. 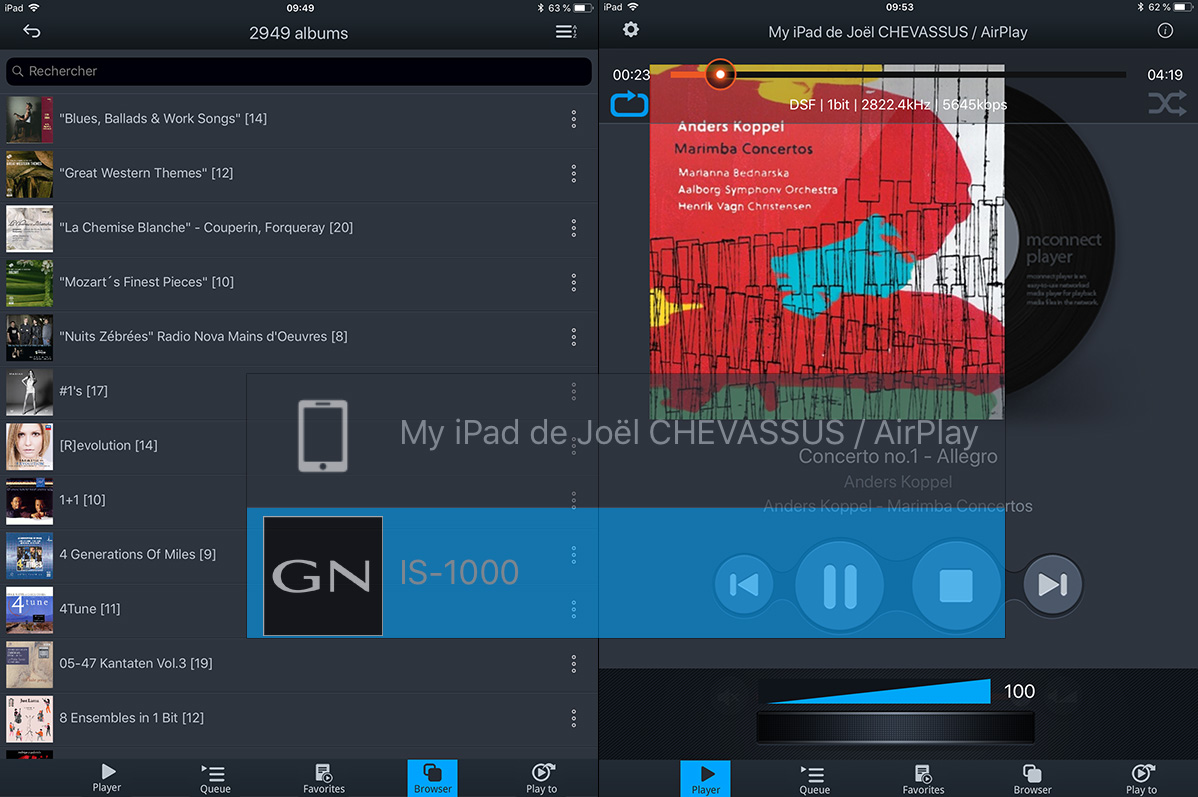 On 2LS's So is my Love album featuring the Ensemble 96 choir, the IS-1000 better focused and segregated their voices than the Lumin M1 which provided a more open sound with less precise contours for each singer. Both takes were worthy of interest as they offered two different visions, one more detailed and quiet, the other more global and dynamic. I would not say that the Lumin M1 delivered less detail but considering its direct conversion from PCM to PWM, I was surprised not to hear more detail from it. In fact, the IS-1000 offered almost as much but upon a darker background with subsequently better tone.

Listening to Sam Smith's "Stay with me" from The Temptations' All the Time record, the M1 delivered the bottom end with more authority whilst I had to use the IS-1000's analog boost setting to get a comparable bass response from the dual-concentrics. Voices were brighter with the Lumin, warmer with the Gold Note and as such, perhaps a bit more in line with Motown's sound philosophy. On both, the Temptations' legendary harmony was alive and despite being slightly different, I enjoyed either take. 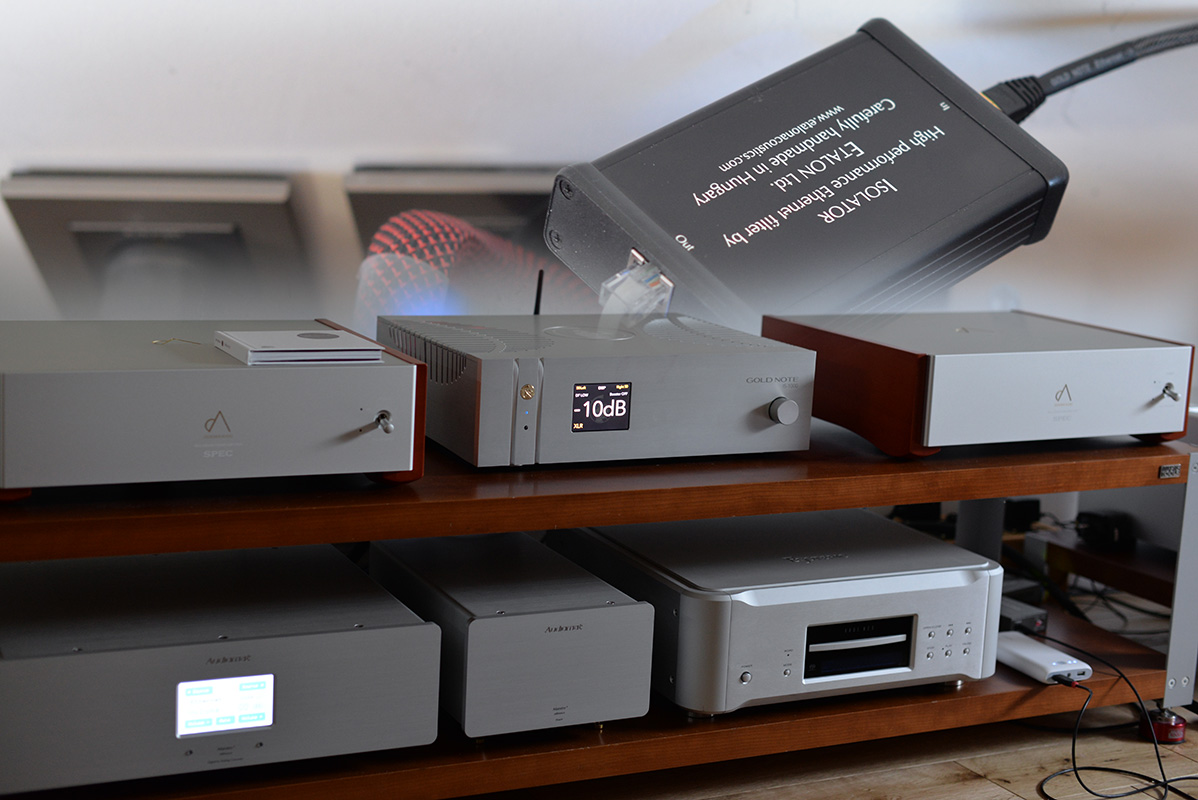 Sitting in this system just a bit more than two metres from the hardware, I never heard the cooling fans except when muting the amplifier. The twin fans were quiet enough to allow comfortable nearfield listening. And as the IS-1000 is equipped with internal heat sinks within a ventilated enclosure, I assume that it can be successfully placed inside a closed or small piece of furniture without issue. In fact, during all my time with the IS-1000, it never got hot even during extended sessions. 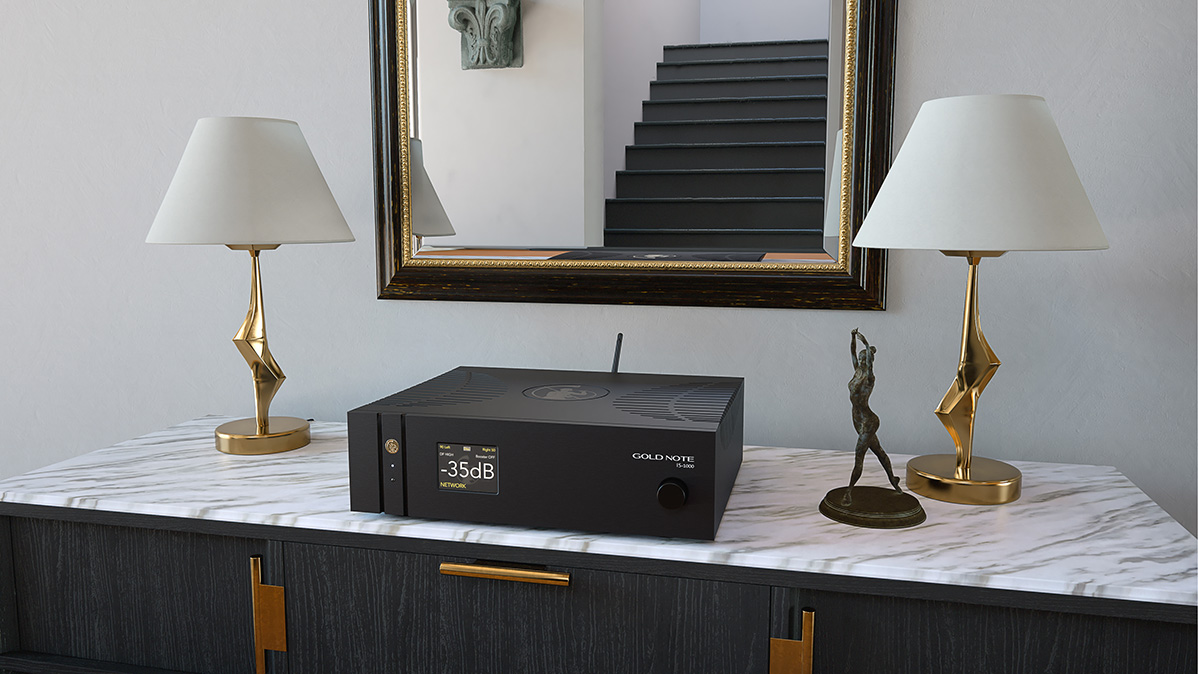 Conclusion. Over its three-month tenure, the IS-1000 demonstrated flawless behaviour. I was impressed by the quality of its sonic performance without regard for different speakers and sources. It's rare to encounter such a versatile device with such strong performance at this price. 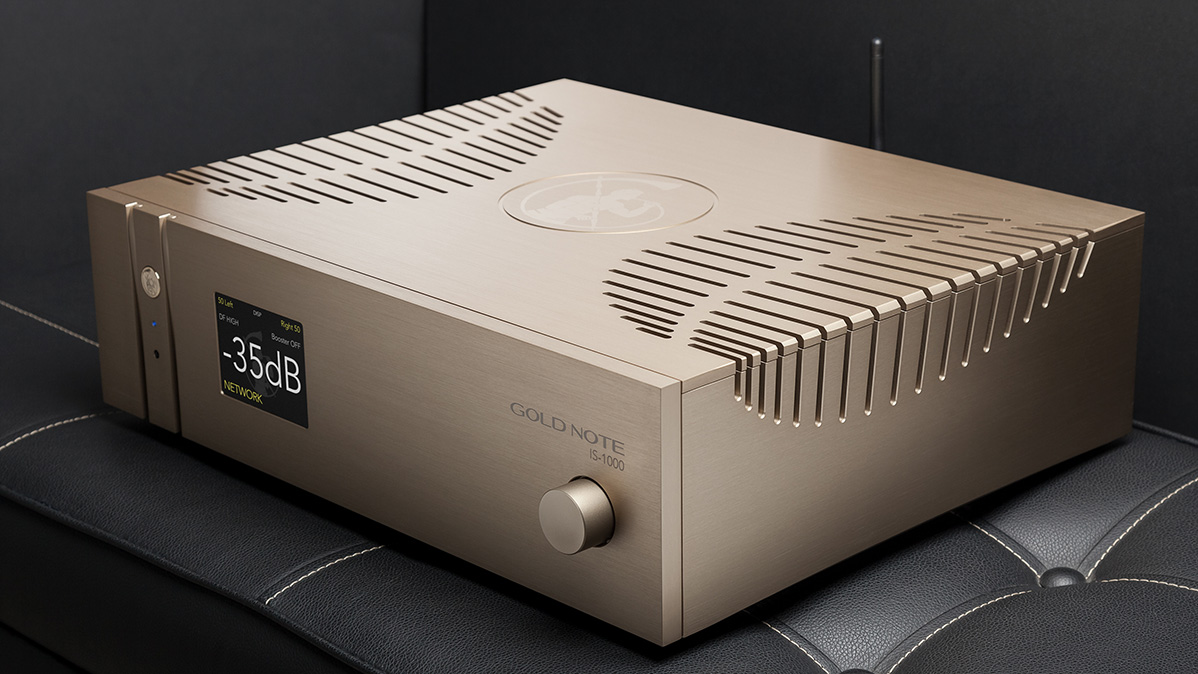 Yet the Gold Note IS-1000 demonstrated its ability to work either in big very ambitious systems or minimalist setups with surprising consistency. Considering the intrinsic quality of its integrated amplifier section, it's even possible to map out an eventual upgrade path with a rather costlier external digital source. Summing up, the Gold Note IS-1000 is a sterling combination of versatility, performance and stable networking. Quite the accomplished combo for its €4'200 ask…