And I must say, my results signed off on meeting these targets. The IS-1000 mirrors technologies first introduced in Gold Note's flagship products. From their PA-1175 power amplifier derives the user-switchable damping factor, from the P-1000 preamplifier a 2-stage analog bass boost to augment bandwidth-limited speakers. Damping factor is either 250=high or 25=low, behaving like a standard solid-state or lower-power valve amp in this regard. At 'off', the booster circuit is completely bypassed and out of the signal path. 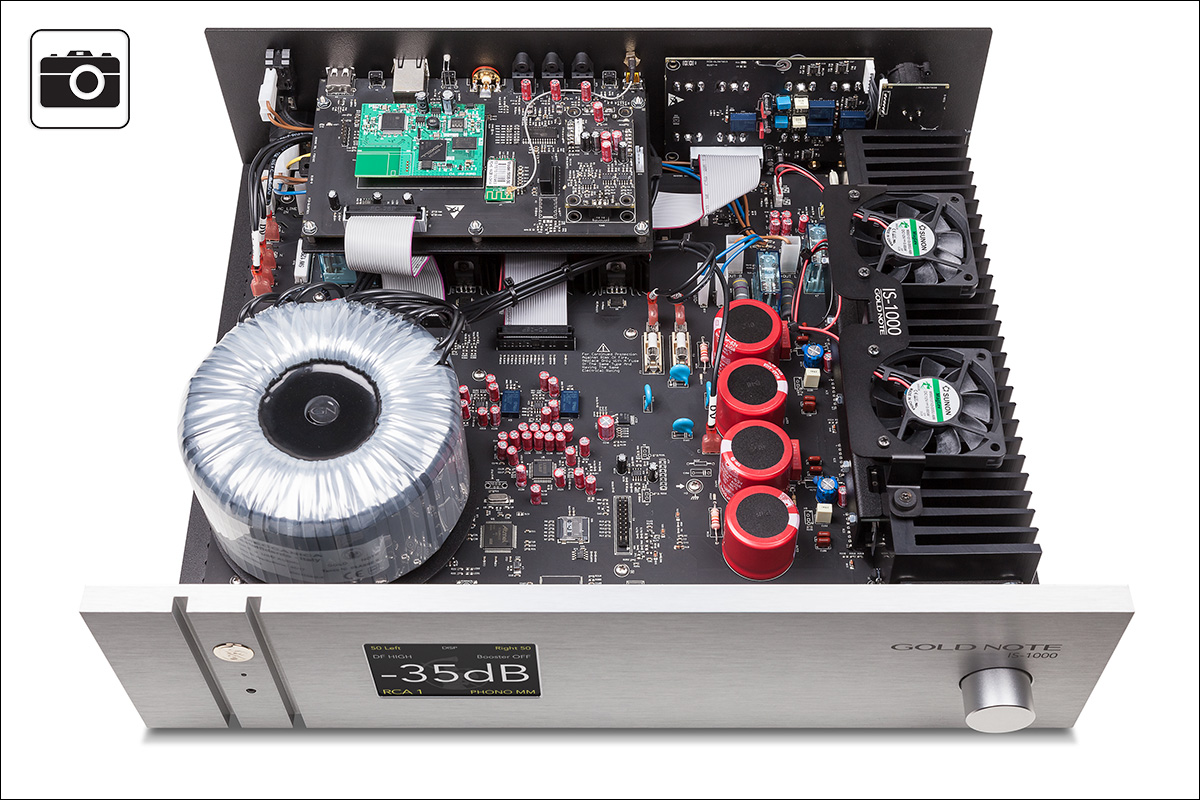 The D/A converter board sports Burr Brown's PCM 1796 but customers can alternatively order it with a Burr Brown PCM 1792 which is fully backwards compatible. Both chip sets seem able to convert DSD files. Three analogue inputs support one XLR and two RCA sources, the second of which can be run either line-level or phono. Gold Note include fixed and variable RCA outputs which turn the IS-1000 into a DAC, phono stage or line stage. Very multi-kulti. In terms of digital, our Italian civilian knife sports one USB type A and one coaxial input plus three Toslink. This unusual optical largesse anticipates inclusion of televisions, AV media players, game consoles and other family devices. 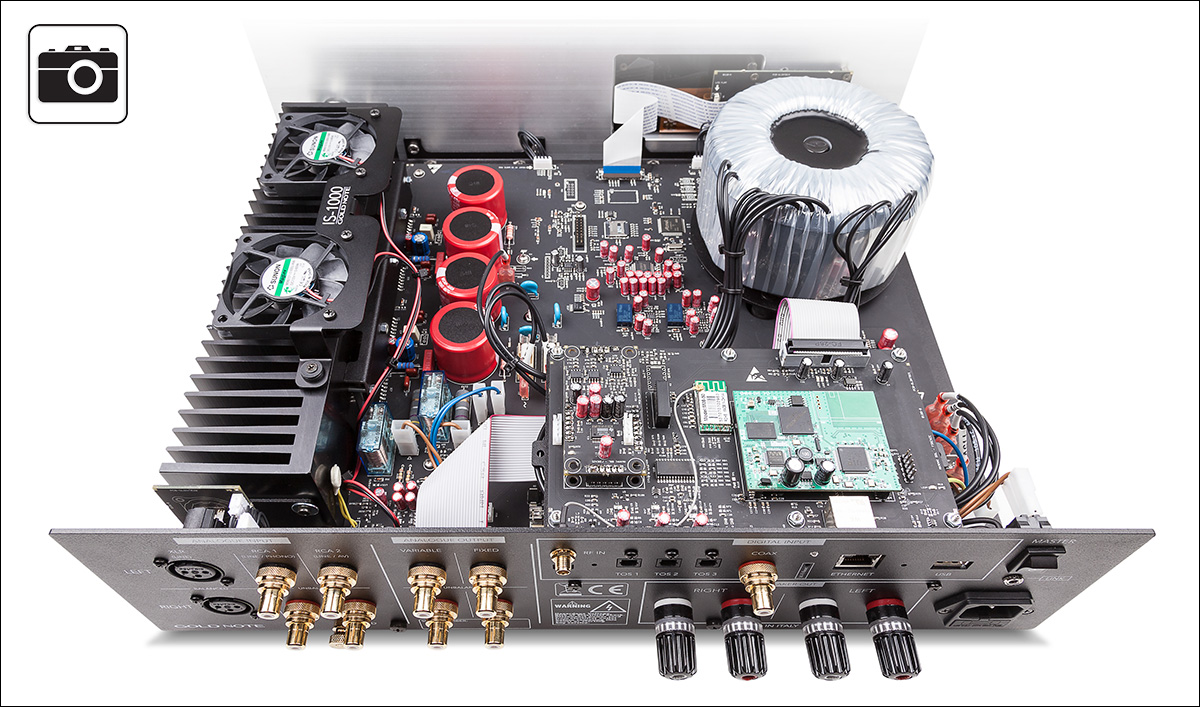 Network connections run over Ethernet or WiFi. As a UPnP device, the IS-1000 can access digital audio streams from servers and network-attached storage, allowing remote streaming services and Internet radio. The IS-1000 can operate Roon, Qobuz, Tidal, Spotify and Apple Airplay. It is fully multi-room ready but does not yet run the Open Home UPnP protocol and thus needs intercession of Bubble UPnP to operate MinimServer with a 3rd-party app. It can also browse digital music stored on NAS, HDD and USB sticks. Gold Note's Android/iOS app is available for immediate access to streaming and seems to be more stable and friendly than my previous experience with the DS-1000 streamer. 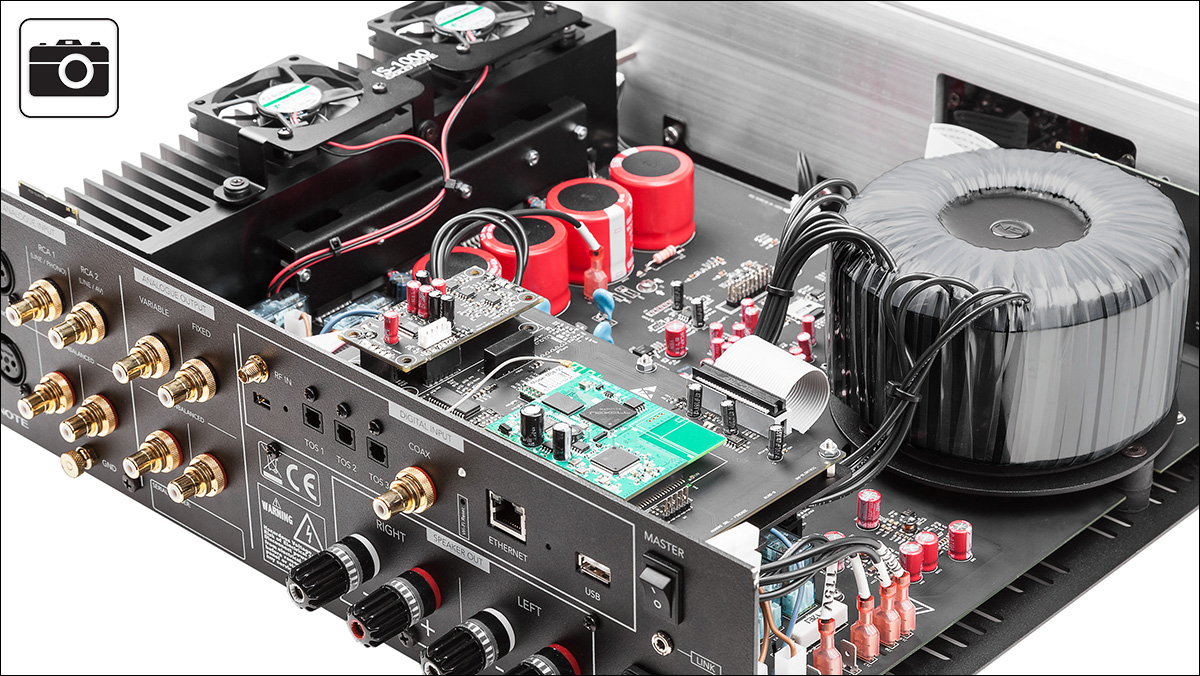 In terms of resolution, both Ethernet and USB-type A handle DSD 64 native or via DoP. The other digital inputs are limited to a 24bit/192kHz PCM. In terms of manufacturing quality, there was little to complain. The IS-1000 is enclosed in a solid brushed aluminium chassis designed by architect Stefano Bonifazi who usually styles Gold Note s devices. As with the DS-1000, the logo engraves on the top. Inside we find ultra-compact circuitry fed by an isolated custom toroid with triple shielding. This new transformer was built in Italy with a specially treated highly damped core to cancel any possible vibration. 600VA ultra-low stray field magnetics promise great headroom. The digital stage is driven by a Cortex-M4 32-bit micro controller said to be extremely fast and stable. It controls housekeeping to oversee all internal processes like temperature, activating cooling options only when strictly necessary.

The PCB use ultra-thick gold plating over doubled copper mass. At the inside's far right, the class A MM/MC phono stage derives from Gold Note's PH-10 without all of its adjustments. MM capacitance is 220pF with 45dB gain, MC sits a 470Ω impedance and 65dB gain. At the front right, the lass AB gain circuit features a hybrid bipolar/Mosfet 'BCD parallel' arrangement on the same die. Such tech is generally used in direct digital amplification. According to Gold Note, it can also be applied to other classes of amplification where using a bipolar transistor to drive high-current output Mosfets reduces distortion at high output power. 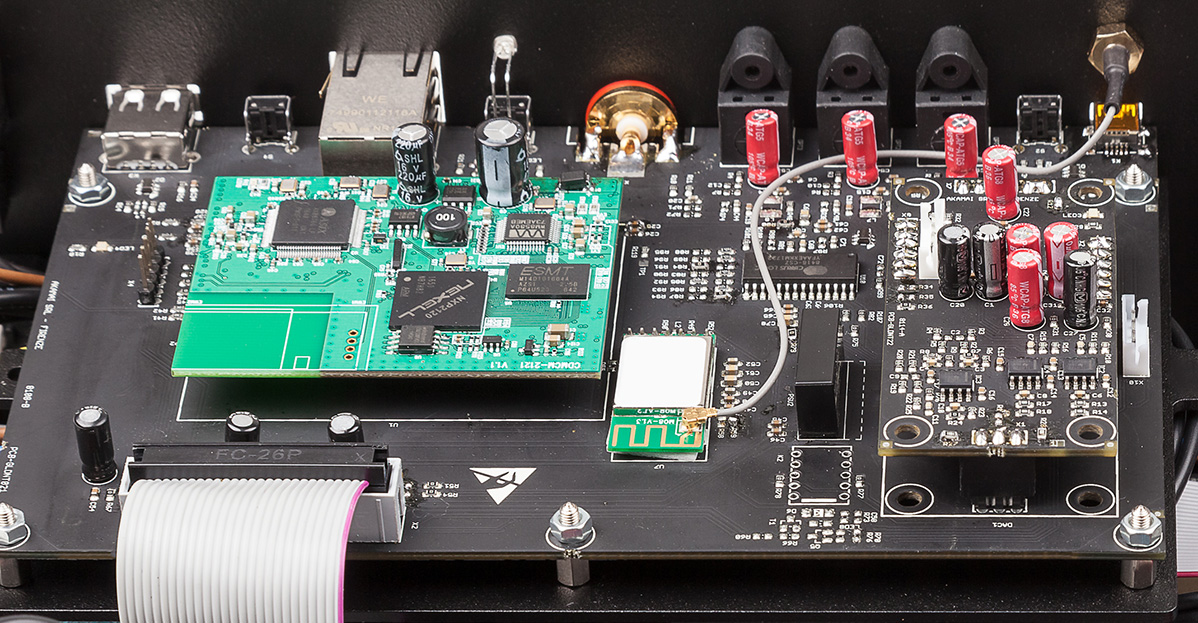 The aluminium chassis was designed for rigidity and to enhance mechanical stability and damping. Tommaso Dolfi told me that every part was selected for the special purpose of making a device cross the bridge between a traditional high-end integrated and a modern do-it-all. 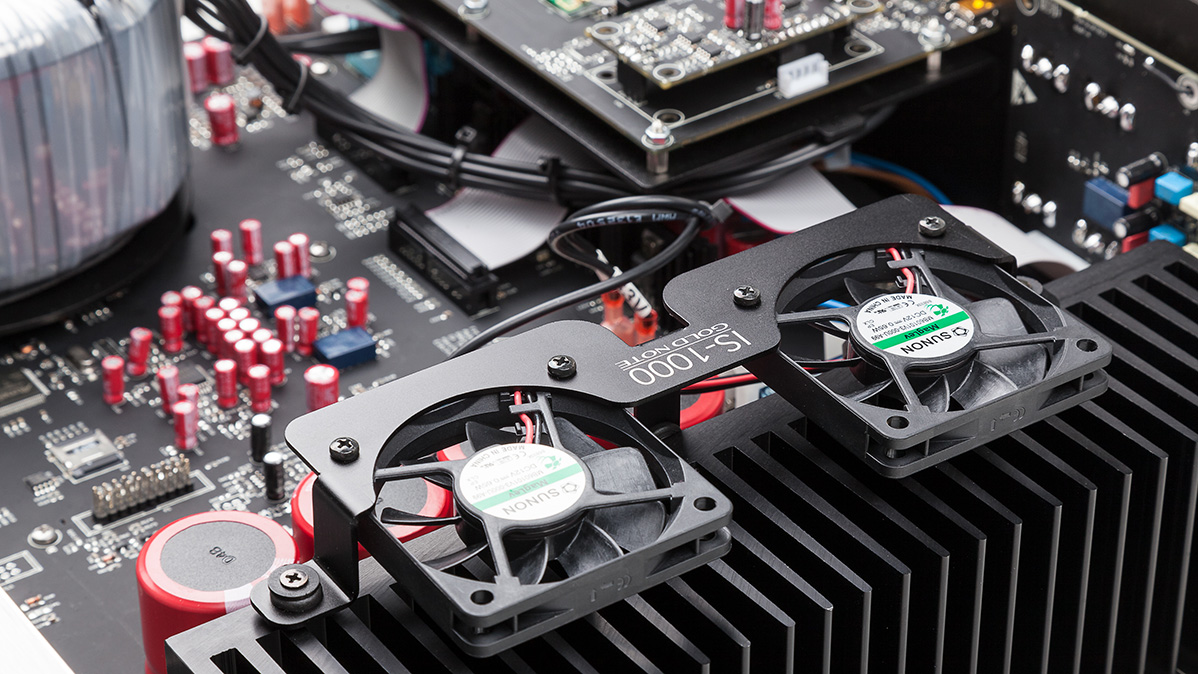 Experience & sound. First, this became a very friendly and satisfying experience. It was rather unusual to receive such a complex multi-function deck which operated this intuitively. I'd already had a good impression of Gold Note's DS-1000 streamer but the IS-1000 was simply flawless. Hence I needed no supporting user manual to explore the full range of its numerous capabilities. Even the remote and network operations were child's play. As you can easily select various browsing apps and ways to stream your digital music, it seemed quite impossible to get stuck on network connection issues. Gold Note include a very simple app to immediately start with an internal server layer if you are reluctant to install Roon or Minimserver. Being used to Lumin's app and Minimserver, I only had to declare the media renderer to be my Synology NAS. Network function were very stable and I experienced not a single crash during my time with the IS-1000. 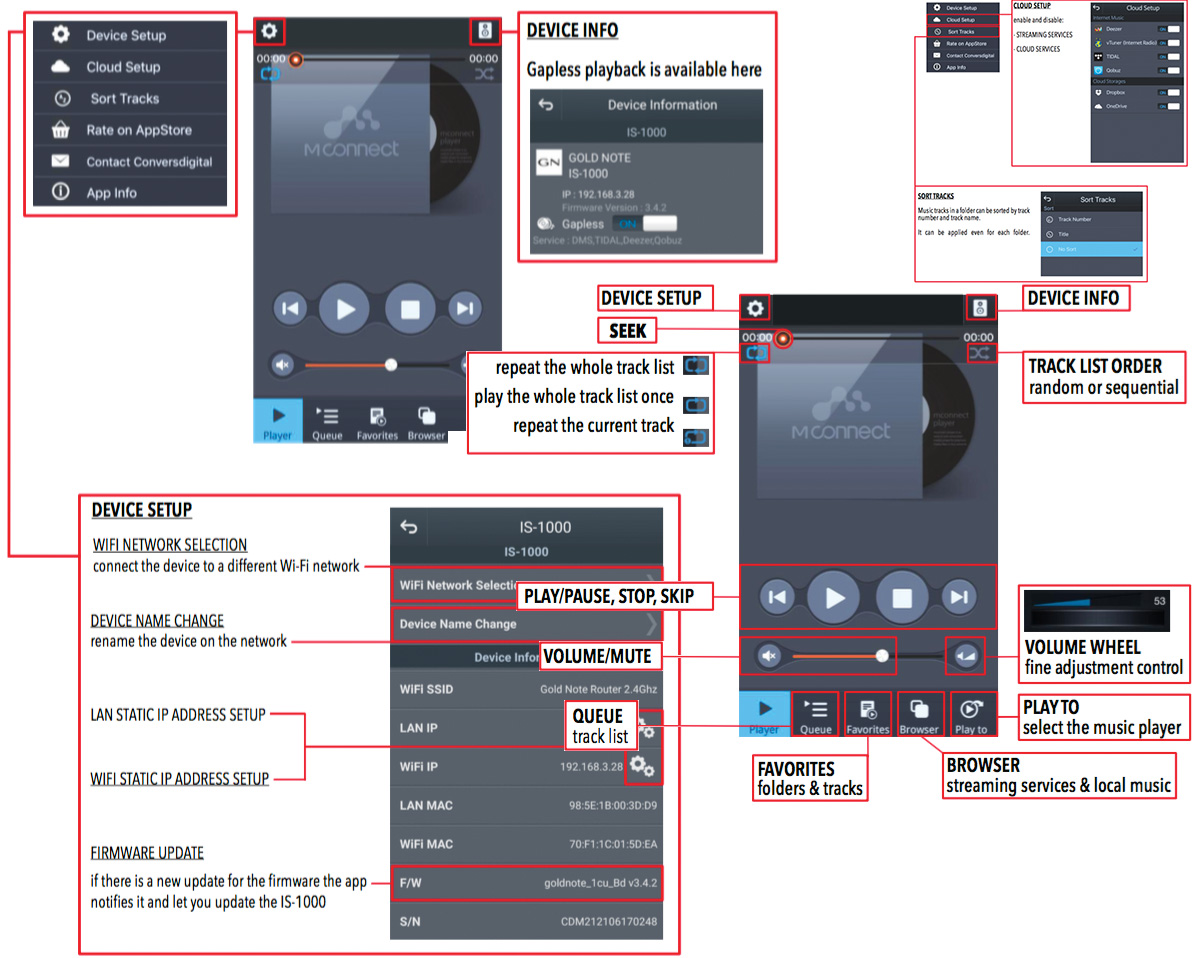