Here is the first review system ending in LinnenberG Liszt monaural power amps and Aurai Audio M1 speakers. Be it our resident Allnic ZL-5000 speaker cables or their 8000S alternates in for review, the effect was the same. With the cables on the floor, the sound was (cough) on the floor: more earthy, fat, soft, pudgy and lazy. In the air, the sound was (crikey) airier: quicker, leaner, more energetic and separated. Time distortion from capacitive store/release delays causes blur/warmth. That masquerades as extra mass. Lowering cable capacitance from elevation bled out that effect. Bass leaned out but gained clarity. Reduced LF overlay into the midband meant clearer more energetic vocals. In the soundstage, depth perception relies on far subtler cues than the basic left/center/right fixation of just two dimensions. Hence the lifted cables caused better specificity of the depth dimension. Finally microdynamic range was better. So was the difference delta of soft/incisive textures between trailing and  leading edges. 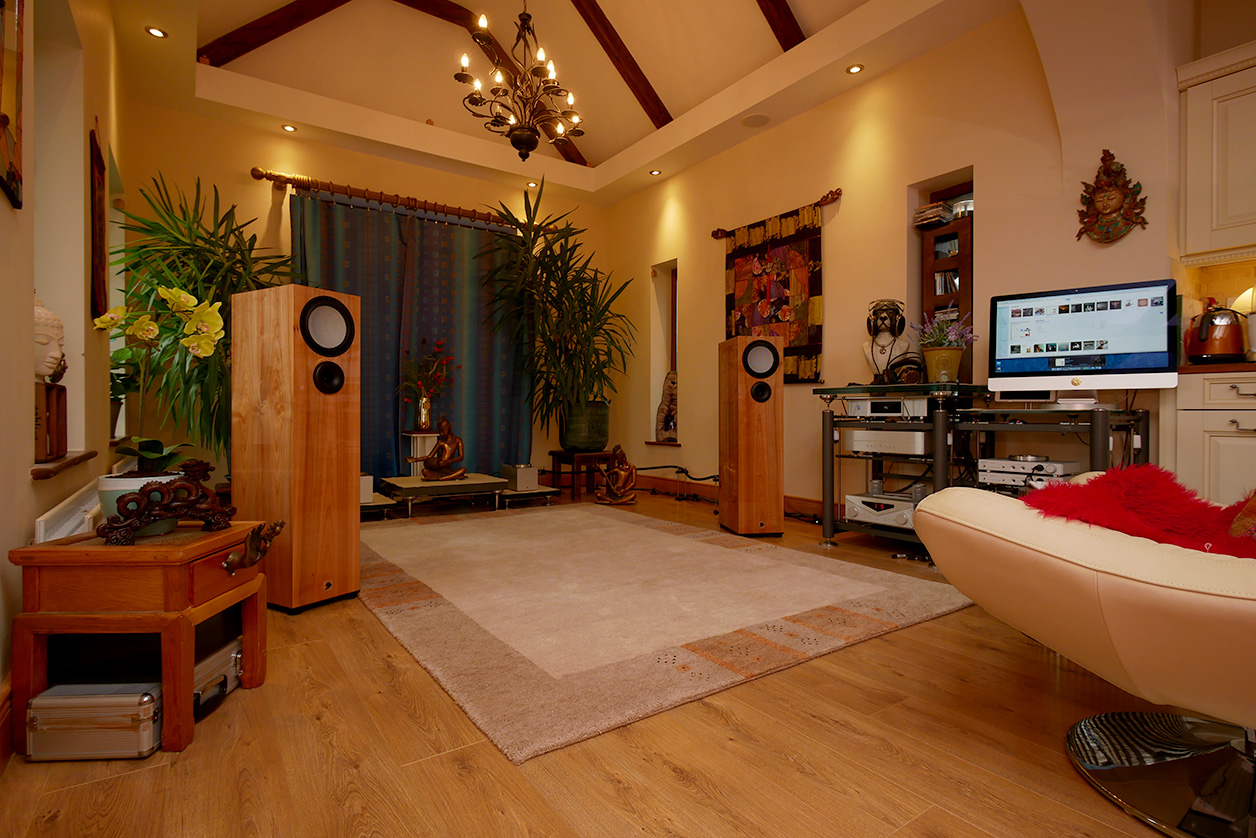 With these improvements booked, I looked newly suspicious at the floor-crawling power cords from wall to conditioner then two mono amps. Might elevating those have a similar effect? Power cords conduct more current than speaker cables. Would that make them more or less susceptible; or outright immune?

Just like a spritz or two of D3 vitamin works during sun-deprived seasons, so the power cords appreciated a lifted energy injection. Whilst the effect was less, it still factored. Again a bottom-up haze lifted to render leaner bass. With it, I had a quicker less fleshy midband. Musical energy went up, tone body down. We all tweak our systems for a balance which most pleases us. The longer we've been at this, the more precarious our balance. That's the grand diva prize of any high-end system. It takes ever less to upset it. Here common sense interjects. Mock up the basic elevator effect with standard household items like glasses and bottles. If you hear and enjoy the difference, get something more purposeful. Otherwise save yourself yet another ticket on the lossy buy/sell train. Personally I prioritize speed and directness. To me they're the forces which most play to musical energy transmission. The progression to a warmer lazier fatter gentler gestalt is very fluid and finely gradated. Again, the power cords had a smaller effect than the speaker cables. Then there's still partial elevation to play with to fine-tune the difference delta. 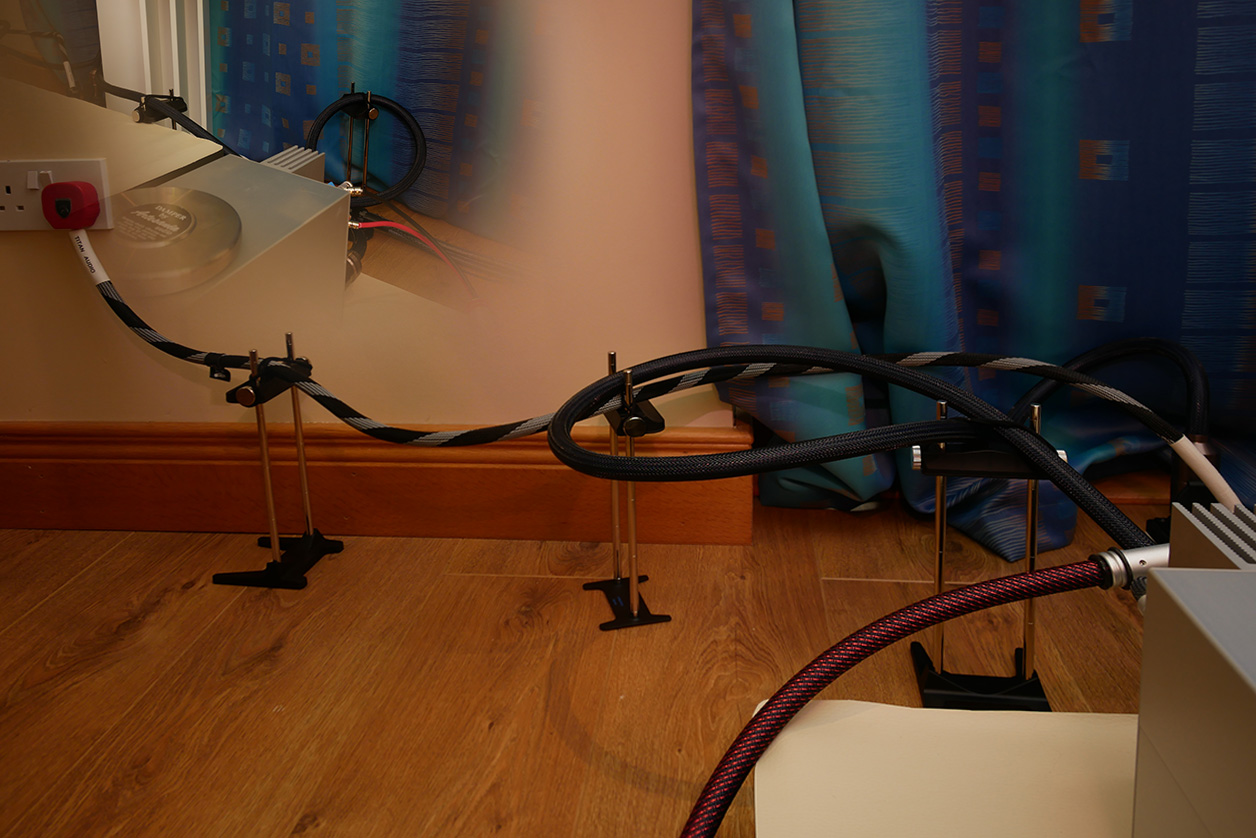 Having two of the thin-base lifts in my loaner set—above you see one between the two standard versions—I next meant to isolate their noise-attenuating properties of the nano-crystal formula on the i/o of a digital cable as Graeme had requested. For that I went to the simpler upstairs system. Here a Chris Sommovigo Tombo Trøn coax connects SD-card transport to DAC. I installed one Signal Booster on either end. See the upper left/right images below, with the red arrows pointing at the devices beneath the ends of the digital cable. I here must cop to sudden deafness. I couldn't hear it. Neither could I hear an effect of adding a deep-cradle Booster across the IEC plug of the power cord entering Furutech's own GTO-D2 passive distributor (bottom left). That's already NCF-enabled so I was probably trying to gild the lily. And the lily refused. Meanwhile elevating these Black Cat speaker cables and, to again a lesser extent, the main power cord between wall and distributor revisited the welcome benefits from downstairs. 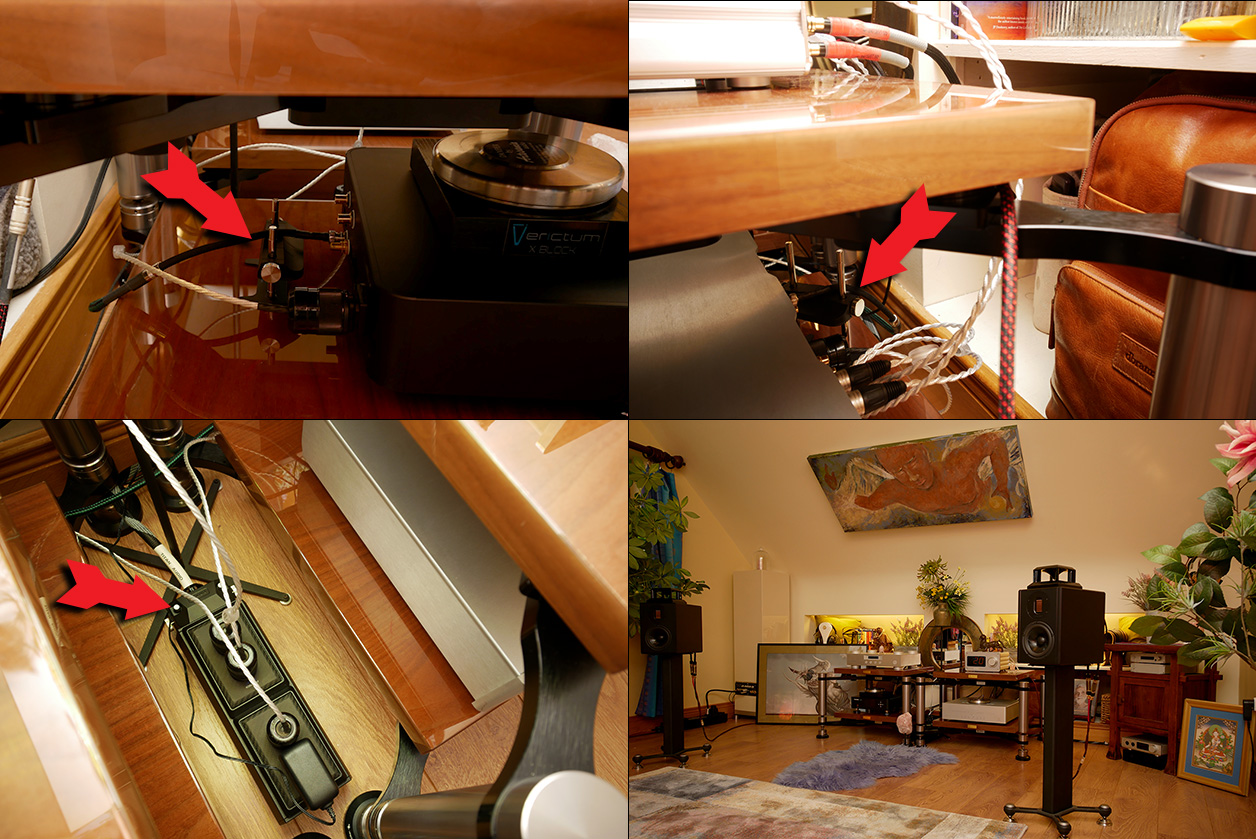 Conclusion. If we're talking about speaker cables that slither across the type composite parquet our landlord favored, I'm sold on Furutech's concept/execution. To a lesser degree, this extends to power cords. Without competing cable lifts on hand, I couldn't isolate what Furutech's NCF inclusion might do beyond mere mechanics. After all, breaching the domain of noise-attenuating signal conditioners is how they're marketed. That investigation remains for another day. For today, think of our Japanese nano-crystal Signal Boosters as the final polish of an already well-balanced mature system. That system's combined cost should be sufficiently elevated to render the not inconsiderable fee of these Furutech a palatable percentage.

In the never-ending quest for higher resolution, there's removal of interference/distortion in the electrical and mechanical domains. Here cable elevators minimize or eliminate capacitive coupling with the floor. If a system is of sufficient resolution, that reduction in cable capacitance becomes audible. It manifests as reduced time smear which previously masqueraded as faux warmth and mass. In their places emerge higher clarity and speed. That equals better separation, more specific depth cues and a quicker leaner more energetic sound. If you call that a bit of sonic rejuvenation, I'd not disagree.