Woof. When pennies finally drop, they can make quite the noise even if you are the only one to hear it. There I was listening to some new tunes whilst thinking on Arouca 516, Portugal's just opened Tibetan-style suspension bridge for pedestrians. At 516 meters, it nabbed the current record of world's longest. The CNN photos looked stunning. Suddenly—clunk!—I saw how using monitor speakers with high terminals and suitable furnishings nearby could create similar suspension bridges for my hustling electrons. The white arrows show that mostly free-air routing with just a few supportive pit stops in-between. 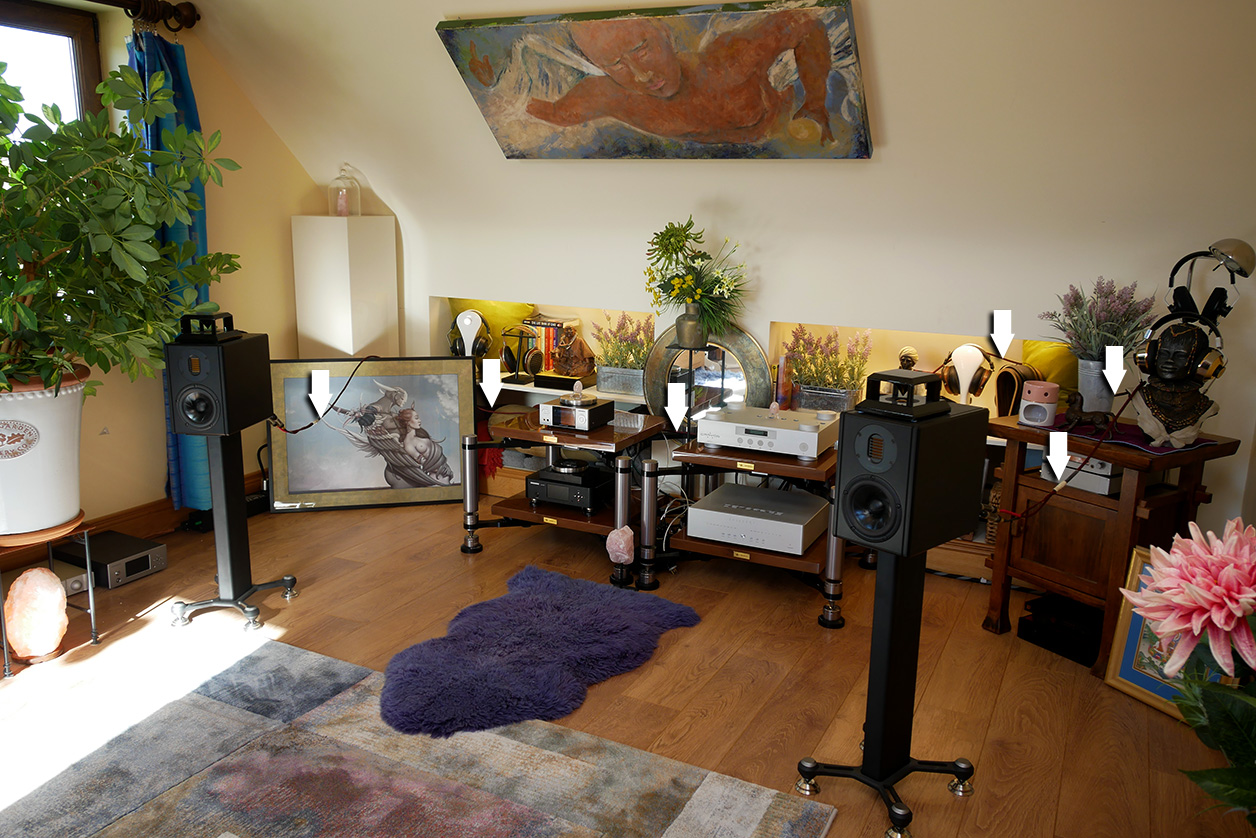 Did it make a difference beyond being easier to hoover the floor? Very noticeably so. Instantaneously, the sound got bigger, more open and energetic. A virtual cloud depression had lifted. 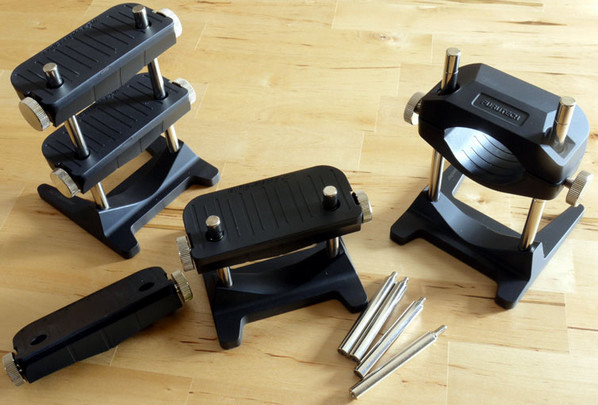 Thinking on why, we return to Roger's article.

We read of dielectric constants. Lower is better. We remember that capacitors store/release energy. It's their job. We appreciate that when it comes to transmitting our musical signal down a cable, we ideally want neither storage nor time-delayed release to avoid blur and smear. We also acknowledge that unless we use raw conductors without any insulation, all dielectrics other than air will behave like capacitors to some extent. Being liberated from some of that was indeed what my suspended speaker cable sounded like now. This suggested that yes, its native capacitance no longer was weighed down by additive capacitance from the floor.

This free and quick fix of course didn't include any potential NCF benefits nor was it cosmetically dialed. It only showed that scoffing at cable elevators no longer had the last laugh. Surrounding cables with air seems to be a sound concept. How big/small the margin of improvement will be should depend on our cables, our floor treatment and our system's responsiveness to changes, i.e. its overall resolving power.

For myself, upstairs would remain in very much animated suspension until an even better and tidier solution came along. Sadly our downstairs setup with floorstanding speakers, no rack between them but 6 meters worth of floor-run signal cable wasn't conducive to this free approach. Furutech to the rescue?

That it only took me 18 years on the beat to figure this out… let's agree to mark that in the column of better late than never.

Here's a prior review on the subject. Audiophile Man Paul Rigby chronicles his experiences with today's cable lifts. His own journey began in minor ambivalence but ended in excitement. Where would mine deposit me? Given the free draping preview, I had a happy prediction. Furutech's Signal Booster name is simply misleading. This passive approach can't boost signal as though it creates something from nothing. Rather, it can incur less loss. The end result may feel the same. To keep us honest, I just think that we should call it fewer losses. Of course LessLoss is already taken by Louis Motek's company in Lithuania. Flipping things to signal booster then is the alternative. Okay. "I included a few pieces of NCF Booster-Signal-L. With its lower profile, it achieves minimal cradle height. That's very effective to support cables and connectors at their component inputs. If you have the opportunity, I highly recommend to test it on digital and phono inputs." Indeed, the L version replaces the thicker nylon foot with a thin metal sliver. Now the cradle fits beneath even low-placed connectors. The device is otherwise identical. It can be used for all applications which the standard Booster supports. 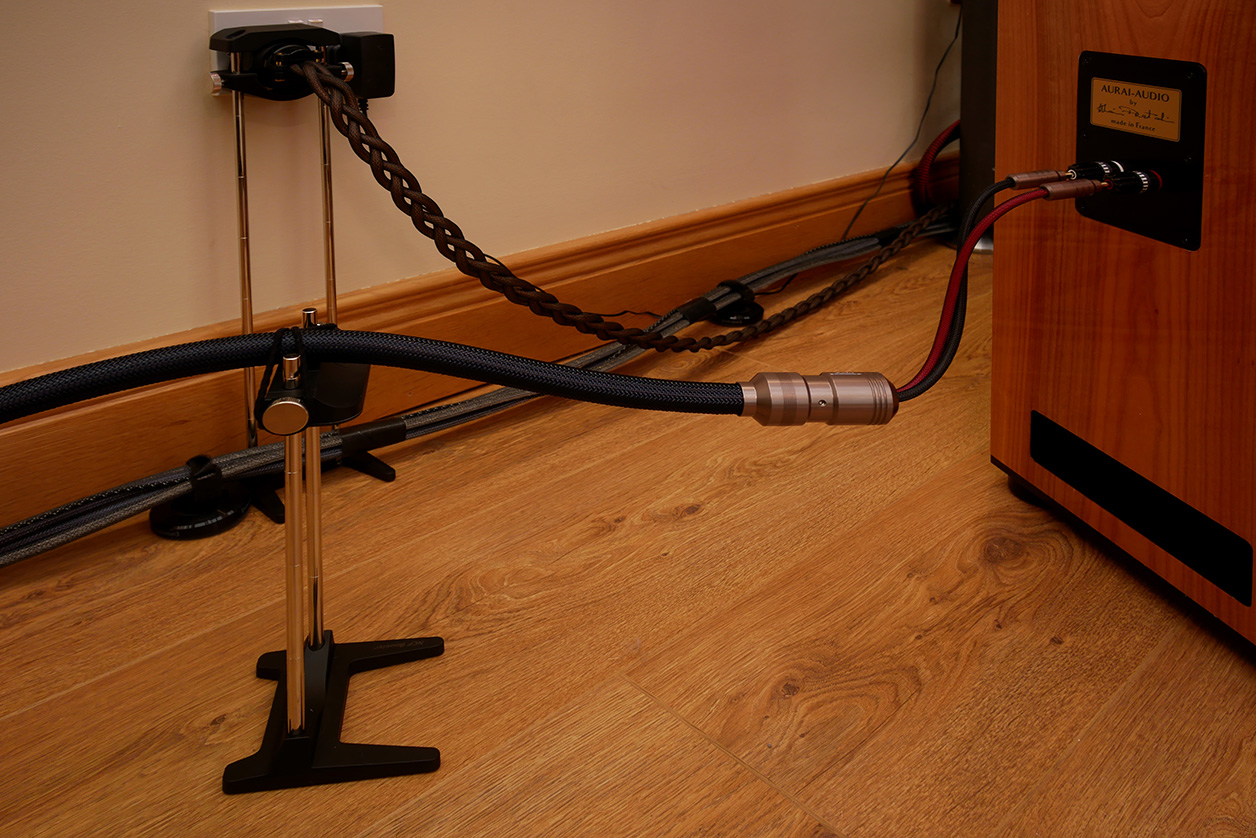 With 6 x standard Boosters and 2 x 'L' variants plus 4 x shaft-extender sets, I could elevate Allnic's thick ZL-8000S speaker cable fully and well above the floor. Included rubber loops strapped the cable securely to the cradles. Meanwhile a thick cradle with top clamp on even longer shafts surrounded the wall plug of a LessLoss C-MARC Entropic power cord. That connects our Vibex AC/DC filter for the main rig's source stack. Vibex's own input connector faces up. That didn't suit Furutech's layout. The horizontally protruding wall plug did. So there it went to influence all source components from iMac server to USB reclocker to DAC to Vinnie Rossi DHT preamp. 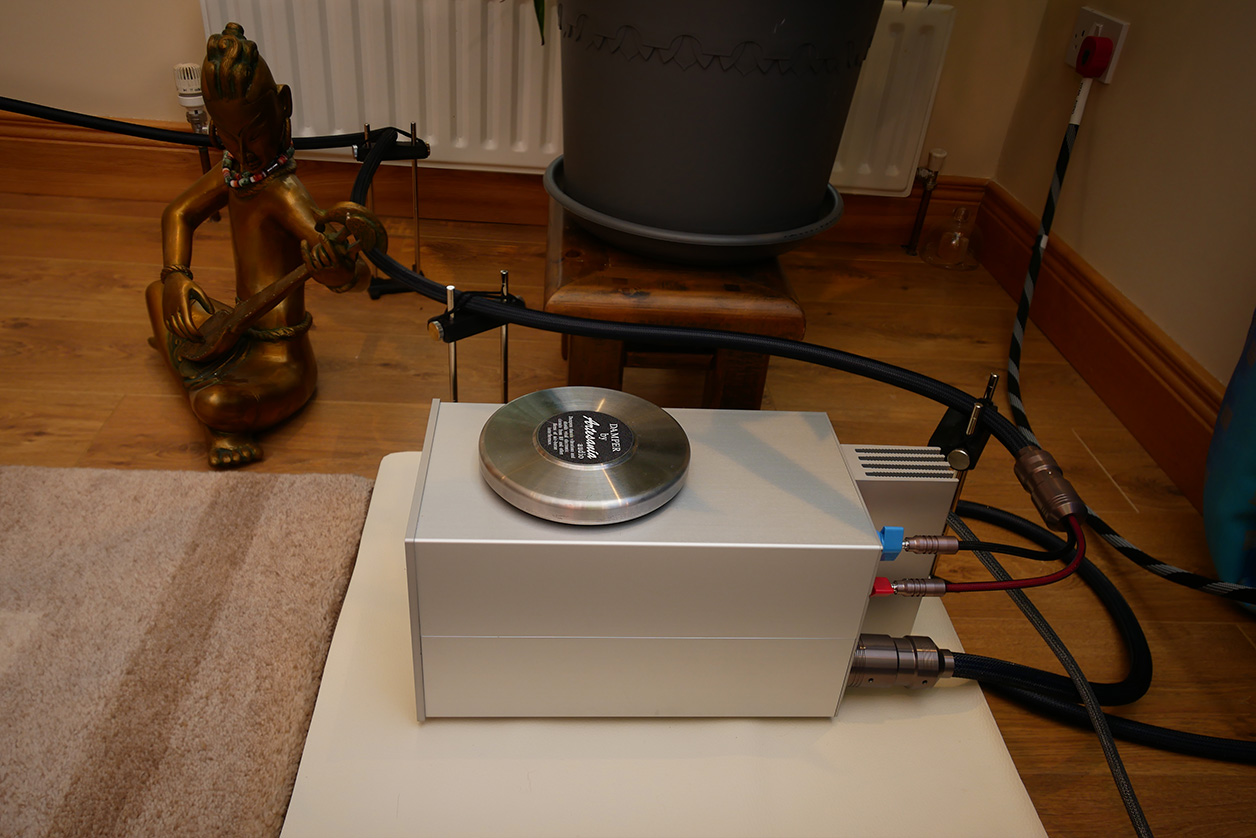