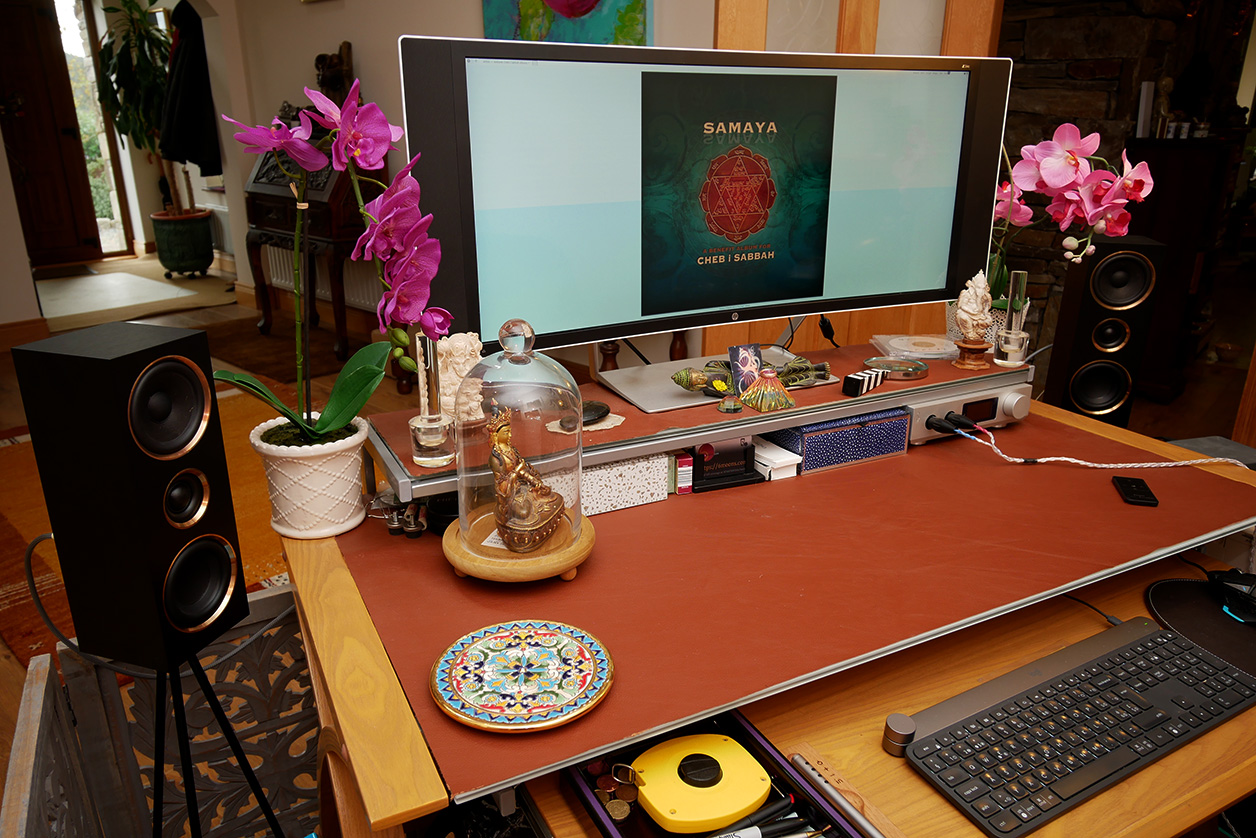 … one of the tracks I enjoyed was this inspired makeover of Jacques Brel's iconic "Ne me quitte pas". It's from the recent Provokation album of Kobe Israelite and one of my favorite accordeon players, Roberto de Brasov. When the song's famous refrain first kicks in, space explodes and dynamics kick it up a gear. Here full-resolution source material and complete isolation of bass from resonant glass top plus wider spacing all hit the next level of scale and immovable clarity.

Checking on YouTube quality again with the new off-glass setup, I traveled to Azerbaijan with this dreamy piano/tar duet playing "Qurban adina", one of their country's classic songs. This being a simpler cut to begin with, the gap with 1'411kbps fare was smaller than naysayers would admit. Getting Midi 120 off the table to dine next to it like dogs during a Roman Empire feast was key.

This even held for bigger drama like Fazil Say's more thunderous piano meditation "Black Earth". It gave me a virtual front-row seat considering just how close the Frankfurt Symphony had put him to the edge of the old opera. Tracking these visuals of a big Steinway concert grand, gaping lid facing the audience, Fazil leaning in for fistfuls of furious power chords, made for quite the disconnect with the modest Fram job. Just so, it fully rose to the occasion of recreating such rousing fieriness.

Sitting farther away would admittedly work against such sterling success. It'd give Midi 150's bigger artillery the edge. But at proper proximity, Midi 120 flatly called out Midi 150 as overkill and financial excess aka idiot's tax. Had the Krakow Fram Quintet of designers shot themselves in their collective foot? Had they made their mini munchkin too good? If we consider just the desktop application, then yes. Consumers rejoice.

What had surprised me when first encountering Midi 150 was the quality of its treble even at low volumes with plenty of digital cut. On extension, dynamics and absence of dullness, the SB Acoustics soft dome tweeter had eaten a few of our resident hard-dome tweeters for breakfast. To demonstrate, I found this solo bouzouki track by Giorgos Kouloglou. It clearly shows where he placed the microphone. At such nearness and considering the timbre and playing style of the Greek lute, his string attacks should sound glassy, crystalline and full of refracting metallic sparkle. Midi 120 was fully up to conveying that energetic quality leaping off the strings like nocturnal fire flies.

How far some people go to catch a brief contact-high with music that speaks to them is wonderfully portrayed by this Russian Luiku video. In its beginning, it shows the precise mechanism whereby modern music evolved with the now irreversible erosion of cultural borders which had isolated ethnic styles inside geographical confines. It's when radio broadcasts and pirate stations began to introduce people to things they'd never heard before that musicians started to borrow foreign idioms. For hifi hardware, our site and global coverage is dedicated to the very same mechanism. We love to introduce our audience to things they may never have heard of before. Or as reader Tim Hahnemann had asked, "while you're working on the new Fram speakers, I was trying to find any other reviews for it or, that matter, the bigger one you still have. I can't really find anything except yours. Why would coverage be this slim especially with the many Polish online mags they have today? Have you seen anything anywhere you could point me at for the time being?"

Back to Midi 120 and Luiku, their brassy snot of oompa bass was fully within the Polski bandwidth. Elevated levels that would have rippled my monitor had it been a sail were fully within its headroom. At the work desk, there's a limit to what SPL are still pleasant even if one momentarily stops writing and just grooves out. Here Midi 120 could still shatter my pleasure dome. Personally, I'd never hit any limits. That's the perfect phrase to fade out on. When used as intended—on the desktop, at the foot of a bed or overlooking a small snug—Fram's Midi 120 from the man with the wicked last name has no limits. It's a complete bona fide high-end system that just needs a source to come alive whilst taking up minimal real estate. 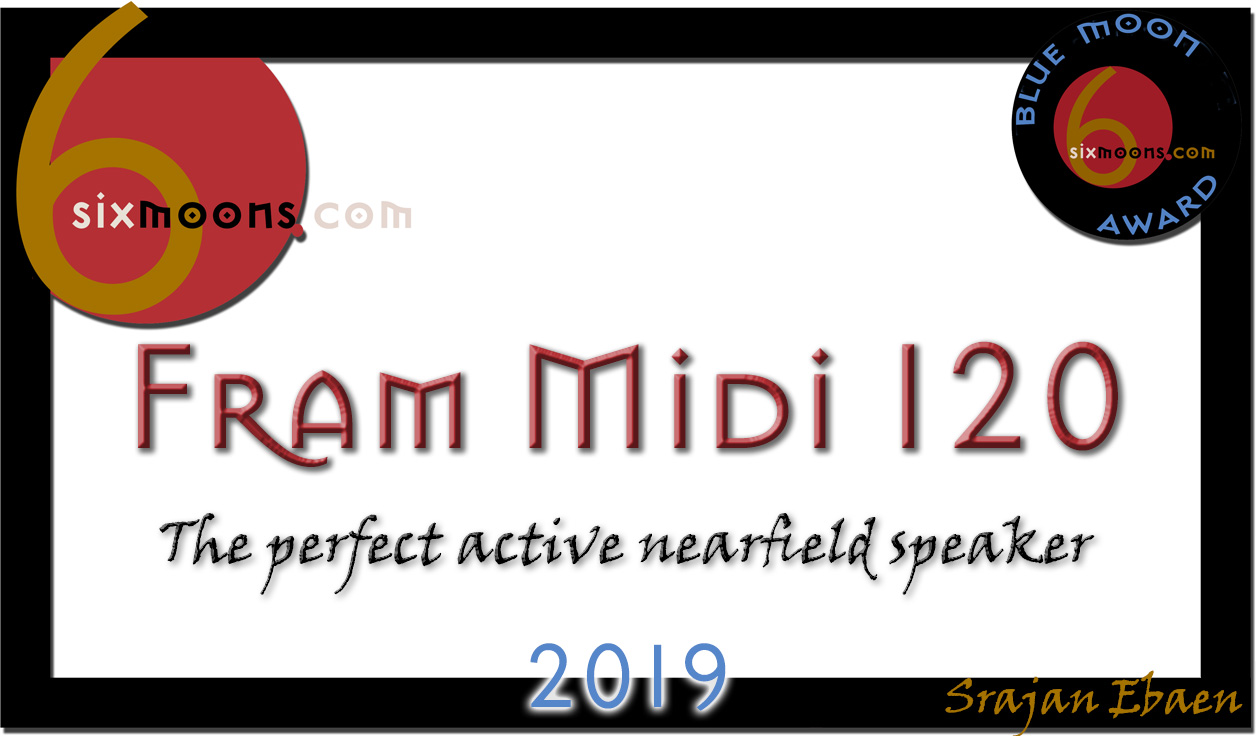 Hence the award and its specific caption. There will be other perfectly active nearfield speakers that I've not heard yet or ever will. These Polish aluminators simply fit the same bill to demand recognition. Given the Ancient Audio pedigree and immaculately coded feed-forward error correction algorithm fronting a minimalist 1st-order analog crossover plus premium drivers, Midi 120 will expose its owners to the joys of audible space, of precise image mapping, of developed tone colors with informative timbre modulations. Plus—and this always freaks out the lot with no prior exposure to well-designed active boxes—it will happily and repeatably celebrate bass reach/power which seem entirely unfair if not implausible coming from traditional passive speakers of similar or even bigger size.

Hence it tracks something like the opening sweep of Patrick Chartol's "Oriental Bass" from his Istanbul album cleanly all the way to the stuttering end. What more do you need? What more could you ask for? A USB port for PC audio? That's the only missing bit I can think of. It's easily overcome with a budget USB-in/coax-out USB bridge. As such it can't distract from the otherwise complete very magisterial success of the Midi 120.

Like LaLoosh's million-dollar arm, Midi 120 really is a badass.

Crash: "And you, Larry Hockett, should recognize me because five years ago in the Texas League, you were pitching for El Paso, I was hitting cleanup for Shreveport. You hung a curve ball on an 0-2 pitch in a 3-2 game in the bottom of the eighth and I tattooed it over the Michelin tire sign and beat you, 4-3."
Larry: "I remember that. I should have thrown a slider. Damn, Crash. How are ya?"
Crash: "I'm too old for this shit. Why the hell am I back in A ball?"
Skip: "Because of Ebby Calvin LaLoosh. Big club's got 100 grand in him."
Larry: "He's got a million-dollar arm but a five-cent head."

You'll need more than five cents to get into Midi 120 but a lot less than 100 grand. And you'll come out swinging for the big leagues…

Postscript: At the November 2019 Warsaw show, Jay Was showed two models of their new passive line sources with ribbon tweeters driven from external solid-state amplification under the Ancient Audio banner. "We presented the first models in our new Fram Line range. The idea was to combine a line source (8 x small mid/woofers on the bigger model) working from 25-600Hz with a ribbon midrange and tweeter from 600Hz to 40kHz. This speaker is for big rooms or halls up to 200m realized in our 'lifestyle' cosmetics. At just 90dB/8Ω sensitivity, a big room of course could need a kilowatt amplifier but soundstaging, speed and dynamics will have this perform as a true audiophile speaker. Hence we decided to make it passive. In the future we will introduce amplifiers of different power ratings to drive them. The price for this bigger Line model will be €20'000/pr. In our small show room at the Sobieski hotel, we used my Ancient Audio Lektor Prime CD player (my first Blue Moon award), the P-3 digital speaker processor and our new A-3 single-ended class A 40wpc amplifier. However, the small Midi 120 also did its job without any shame. In fact, many times it played less demanding not terribly loud music and visitors invariably asked which model was playing."