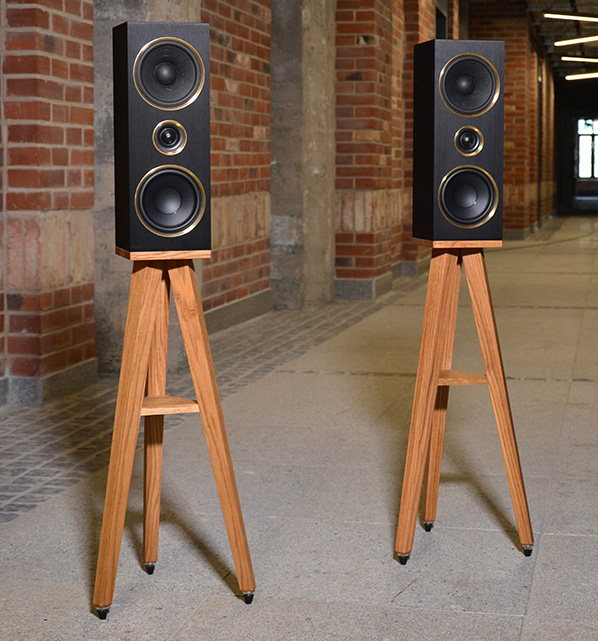 Ziemia Obiecana. It's a Polish movie by Andrzej Wajda whose title translates as The Promised Land. "There's a scene in it where three friends say to each other, 'I have nothing, you have nothing, he has nothing. That's enough to build our factory.' That movie is about our 19th century textile production city Lódz.

"Our Fram story has similarities. Three of us had brave talks near our current textile industry city of Zyrardow. We too wanted to move forward no matter what even though conditions were sparse. Hence the name."

"Your review will mark a new chapter in our cooperation as we now move from single-man operation to proper larger-scale production. Five different designers in total were necessary to engineer the complete speaker set.

"One of them is a real aerospace engineer who had the necessary knowledge to build in aluminium both from a design and specialty materials perspective. Our metal parts are actually produced by an aircraft company to get the tolerances and quality we need."

"Our cabinets are very complex but bored from solid. The internal build needed no reinforcement but still we use some damping material also for the driver mounts.

"The electronics in the right master speaker sit inside their own small sub chamber. The left speaker is passive and fed from the right. The cabinet is very stiff and heavy but acoustically dead. Nothing rings when you knock it."

Machining the stem from solid eliminates bolt connections for big panels which would make the corners the weakest parts. Here 10mm walls do the job whilst the top/bottom inserts are much thicker.

"SB Acoustics drivers are very well engineered, very well made and their domestic distributor Polink is highly responsive and reliable. In the first range, Midi and Maxi used metal-cone widebanders. In the new range, our 13cm/5" mid/woofers have easier work because now the dedicated 25mm textile tweeter handles the highs. These paper drivers are also easier controlled by our processor. Its software coefficients for this new range are entirely different than before. Frankly, the tuning of this software was the most time-consuming part of the V2 design job." The next photo shows the V1 credit-card remote. V2's more stylish pen wand shows further down the page. 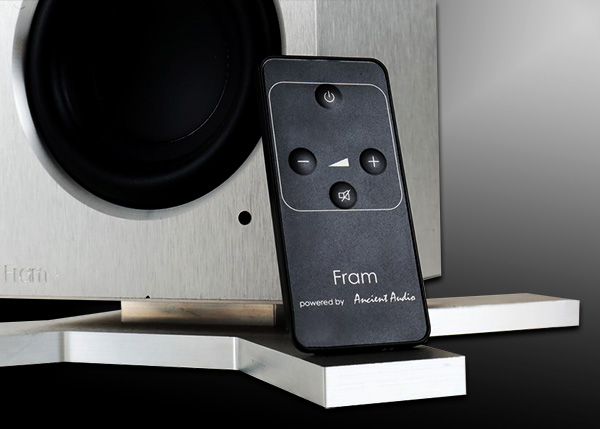 "The most unique new feature are our Peerless passive radiators. The one around back sits directly on the mid/woofer's axis because it's tuned to handle a bit of midband still. The one on the front only reinforces the mid/woofer between 35-60Hz.

"The three user-adjustable DSP settings don't directly compensate for the room because that would entail complex user measurements. Instead we tuned the neutral mid position program in an optimal room via the analog inputs. Smaller rooms may want less bass (-4dB) or less treble (-5dB).

"The soft program thus cuts HF and can also be used with the digital inputs whose more transparent and direct signal path passes more high-frequency content which might shift the tonal balance up. The soft setting corrects for that. As we learned from customers of the previous series, most use only the neutral setting.

"Our A/D and D/A converters are 24-bit Crystal Semiconductor chips with a natural sound and low noise floor. Both work in balanced mode for very lowest noise. Volume control is in the digital domain with well-designed dither algorithms.

"Our proprietary DSP runs on 32 bits. Our coax/Toslink digital inputs use a 24/192 Burr-Brown digital input receiver. The USB power port will charge a smartphone, digital audio player or power a wireless Bluetooth receiver.

"For analog sources, we have 2Vrms high-level RCA and 1Vrms low-level mini inputs. Amplification is via two balanced/full-bridge Texas Instruments 60-watt class D boards. Those drive a passive 1st-order crossover. DSP corrects for remaining phase shift. That's key for proper image focus and low-level ambient reconstruction." To highlight that last paragraph, active speakers differ from so-called powered speakers by using an active crossover ahead of their amplification. Fram speakers combine DSP in front of the amps with passive filters behind them. That's unusual. 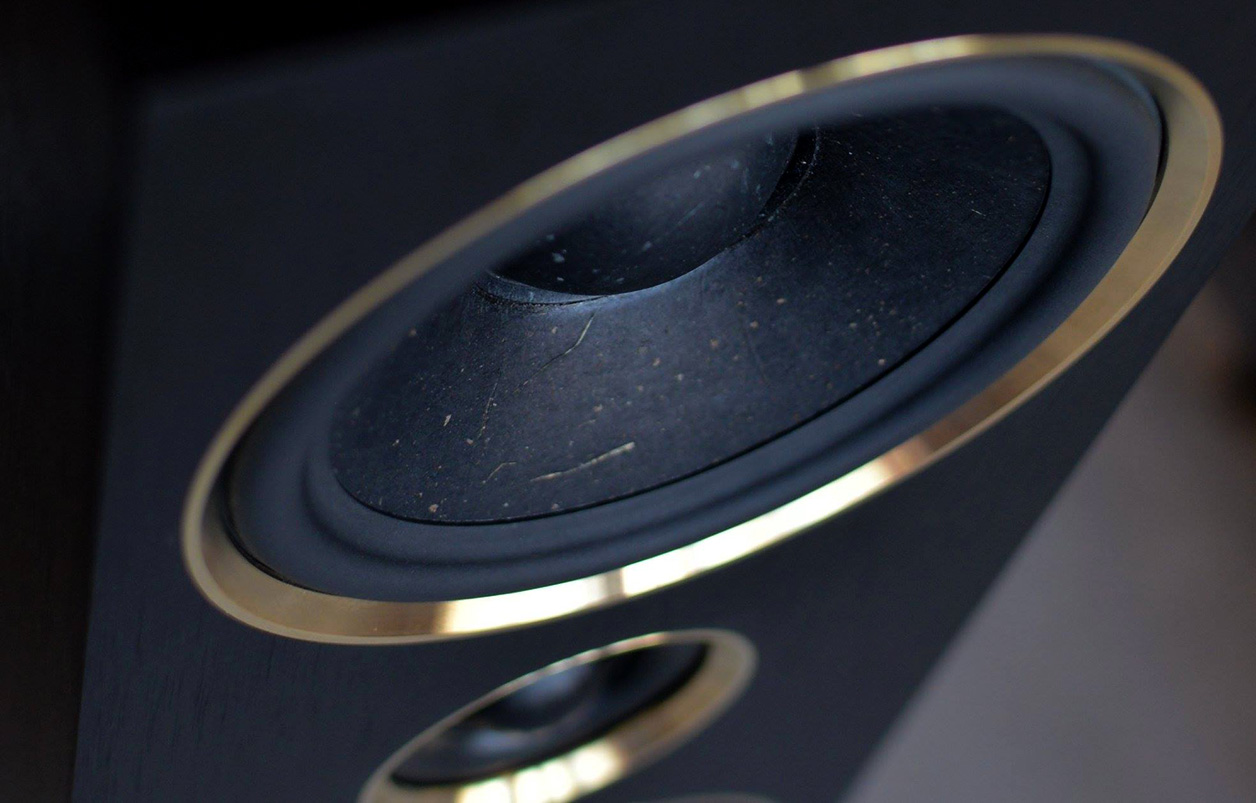 Jarek would have to explain the advantages of this design choice.

This photo shows a V1 Fram box with its thinner side walls and a more massive top or bottom insert.

"Operation is managed with a low-draw micro controller which receives its commands via keyboard or remote control to switch power, adjust volume and select inputs. Operational mode is indicated by a small pin LED. Red is for standby, yellow, green, blue and violet indicate active mode and volume setting. Blinking white confirms the chosen input: one blink is for analog, two for coax, three for Toslink. In standby, the amplifiers are fully off for long-term life. So is all the analog/digital circuitry ahead of them. This meets the new CE regulation standby spec for low power draw.

"The power supply is an external 24V/5A switcher. It's very easily replaced should it fail. In the future, we'll have more advanced options. We even contemplate a batter supply. No kidding, at my daughter's wedding I used a pair of older Master Oslo with batteries in the garden. As you can see, our Fram speakers are technically quite advanced and forward-thinking. I will send you photos of the insides because these constructions are difficult to open and close. It needs special tools which I had custom-designed."

As the diagram of typical two-way speaker issues shows, Jarek's digital speaker processor corrects for rather more than just internal standing waves. Jarek demonstrated its effectiveness at numerous A/B/A demos during audio shows and his chip can be used in mass-market sound bars, tell-a-visions, computers, car stereo, even headphones. For a small Polish manufacturer to grow into an OEM chip supplier for mass-market products would obviously be a dream come true. But no matter what that particular future holds, it's already inside the Fram speakers. Outside is the new remote control.

Looking for conceptual kin elsewhere, in the high-end's traditional passive speaker sector lives the new Kaiser Acoustics Furioso Mini as another two-way augmented by two passive radiators. But Furioso mounts them horizontally opposed on the sidewalls of a very complex cabinet whose non-parallel walls and kinks combat internal pressurization modes with pure geometry. By modeling Fram's standard rectangular cabinet in software to expose its issues as well as those of its drivers themselves, error correction can be built into the far cheaper more effective digital domain.

Which neatly segues into a weighing of errors. Do you believe that minor potential losses of A/D+D/A conversion weigh heavier than all the things Jarek's processor corrects? Now you'll play the purist card to prefer a standard passive speaker for your analog sources.

Do you believe that what Fram correct far outweighs whatever minute stuff the extra converter round clocks on losses? Now you'll happily embrace it even with your analog sources.

But it's 2019. The vast majority of prospective users live exclusively on digital streaming sources. That bypasses the A/D argument to focus down on wired vs. wireless delivery. Parked on a console or hutch, a pair of Midi 150 act as bookshelf monitors. They welcome any bigger physical source right between them. Perched on their wooden tripods instead, your digital cable will get longer unless you broadcast Bluetooth off your smartphone or DAP; or wire up an Astell&Kern-type digital player atop the master speaker with a now standard-length digital leash whilst a shorter USB cable keeps it charged off Fram's power port.

Being a WiFi allergic household without sufficiently long coaxial cables, the wired DAP route would be my default path for digital. For analog, our standard loom would suffice to position the stand-mounted Fram exactly where all our usual passive floorstanders go.

To square off before we round out, €4'000/pr for a 5-inch compact two-way obviously is far from a lightweight proposition. But the Midi 150 is a complete system minus a source. Its drivers are sourced directly from a top shelf. Given its full metal jacket, one might think of it quite legitimately as a baby Magico, Stenheim or YG, simply one from a Polish mother who magically activated it during birth. Now the table turns quite a bit. Now the Fram Midi 150 looks like an upscale active high-ender for a still lower ask than the famous brands. As always, that's a matter of perspective, relativity and how one plays those—turning—tables. 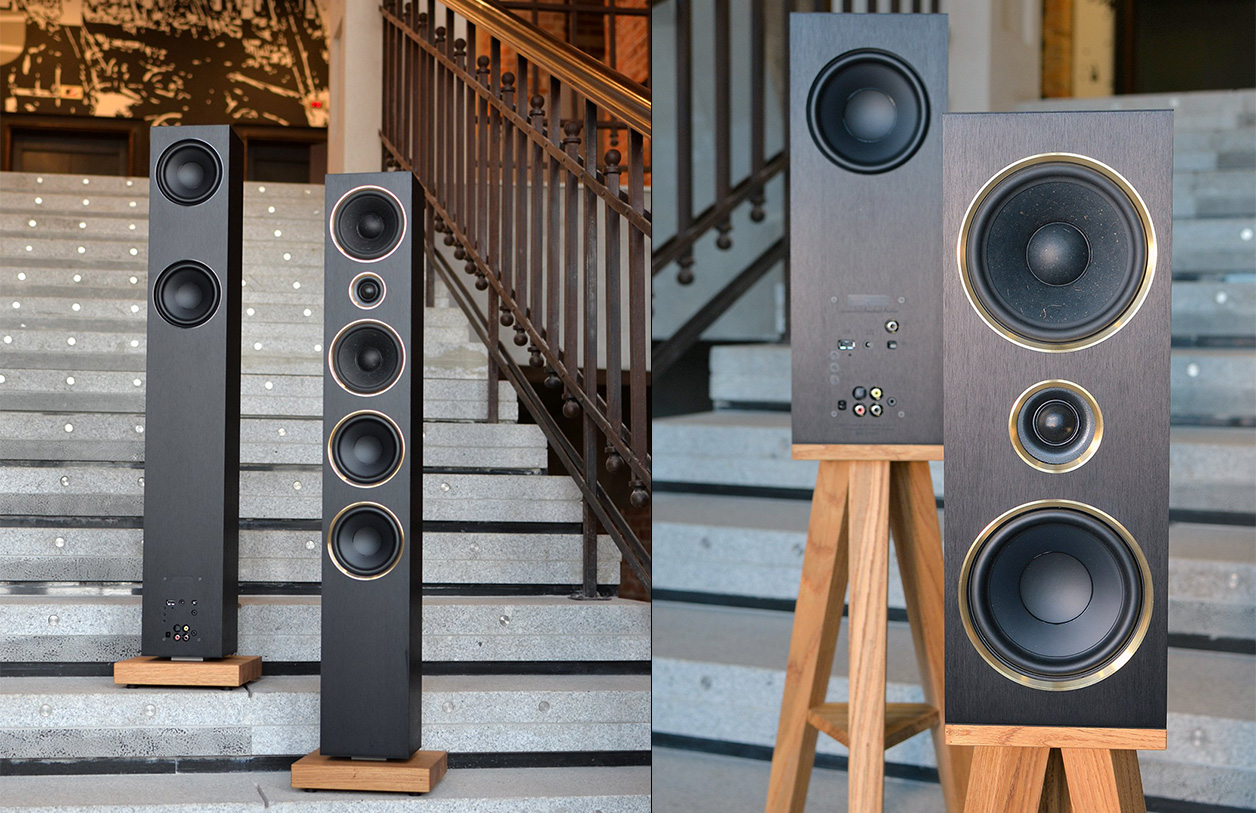 Playing a quick conversion table on how to calculate a circle's diameter back from its surface, the combined area of 3 x 130mm or 5" drivers converts to a single 225mm or 8.86" woofer. In the bass where the cone areas of Midi 150's active mid/woofer and its two passive radiators overlap, this compact box behaves like a nearly 9" two-way. From that and DSP-compensated active drive, one would expect solid reach to ~40Hz. That was my best guess prior to arrival. With its rear-firing passive radiator tuned to 45Hz to likely act as partial lower midrange given its location right behind the active mid/woofer, Midi 150 might have a more spacious presentation. Even though DSP can correct for phase/time and amplitude, it can't conjure up a particular radiation pattern. For that, Jarek had to massage his driver orientation.