1 –  2 = 3. I did warn you. Here the +1 is the single smaller driver. The -2 is no room gain from extreme nearfield positioning and its lack of related response weighting; then A/D back to D/A conversion to apply DSP. Both apparent shortcomings act as positives. They add not subtract. It's how perceived minuses become pluses; how DSP smarts outshine extra conversion stages. Could another small speaker put in the same physical spots not do the same? I already presented my former desktop speakers. They too are active. They too exploit proprietary DSP correction. Where they diverge is being fully aluminium-clad 2-ways whose response compensation encounters a passive 1st-order filter before it sees the voice coils of a 3½" 2-way array. Two 3½" passive radiators per channel add pseudo ports. Yet—supposition alert!—their digital signal correction doesn't address the same parameters. For further background, my prior desktop mates were passives so Sven Boenicke's W5se on custom stands; and Anthony Gallo's Strada II before them. None touched the quickness, lucidity and directness of what Andrew's did now. On that score and imaging freedom, they set new records.

In a recent podcast chat with John Darko, we compared impressions of Soo In Chae's Enleum AMP-23R. Could he relate to my core descriptions of it being lit up all over; and having very high speed? John remembered a girlfriend's Mini Cooper. "At first I thought she drove like a maniac. Her car sat me very low to the ground. How that transferred road conditions and directional changes felt real fast even when her speedometer showed that she was well within legal limits." I could relate. Ivette too had a Mini. It's also how the SC5 communicates speed. After all, a 4'37" track takes exactly the same time to play as it always does. In that sense it's clearly no faster.

It is in the feel of translating road conditions more poignantly. A luxury limo's plush suspension evens out bumps, lowers rain-groove tyre chatter, diminishes the pull of cornering and cocoons the occupants in a virtual bubble. If you're in a taxi driven by a stranger, that's what you want.

A Mini's low center of gravity and sportier suspension are a bit closer to a nude street bike. It keens the driving experience. It has us more active participant, less observer on degrees of auto pilot. Rewinding, I could easily call the SC5 a speaker version of the AMP-23R. Both are compact with a low power or proximity rating. Both are unusually immediate so strip out intermediary fuzz, haze and soft focus. Both are evenly lit up across the bandwidth but not beasts in the bass.

"These are true control monitors for professional work. They are difficult to use just for listening to music. They give a very linear dry analytical sound. Only well-recorded music will sound good. More than half of your favorite music library might be thrown out." I didn't hear dry or analytical. Analytical is a mind set. It's an intention. It's something we apply and do to our experience. By itself, the sound simply is, be it highly magnified or artistically veiled. If we don't use our ears as virtual eyes of inspection, we just leave the sound be. Even a highly revealed full-frontal delivery won't feel analytical, just more intense, informative and direct. I fully concur with very linear but not dry. It's because my preferences overlay so perfectly. What someone else might call dry, I hear as not enhanced or less so. That looks back at various valve amps and pres I owned. I eventually moved on. To sundry degrees, they all played additive enhancers. They diminished raw vitality/speed as though by cotton taffy and brake pedal. As to half my music getting unlistenable, not so. Instead I saw Andrew's comment as a mixing engineer's take on the audiophile mentality. To borrow a famous Jack Nicholson movie line, we can't handle the truth. And it's certainly the case that my listening habits won't go places I can't handle. E-guitars in overdrive screech, doom metal screaming like angry demons, crisp-fried Pop, soulless techno – none are visits I make. If you do, Andrew's warning could matter (a lot?) more. 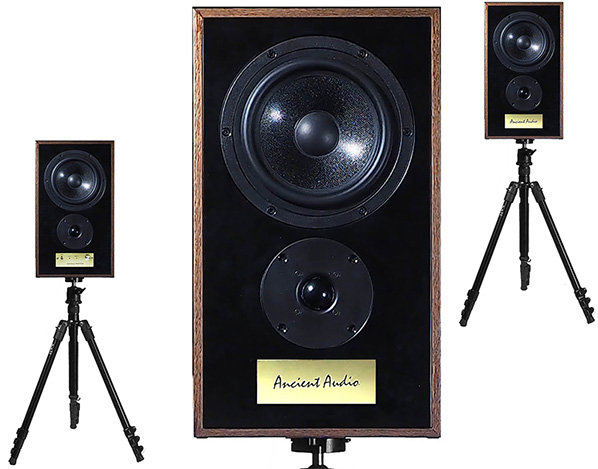 Again, this direct-coupled single driver without whizzer set up in nearfield proximity works not that different from headfi. There's no crossover confusion, no dissimilar dispersion from multiple drivers. There's no real room involvement either. Unlike headphones, there's custom undefeatable DSP. Its corrections go beyond the frequency domain or simple digital delay whereby active multi-way speakers can time-align voice coils on a vertical baffle. At €70/ea. from a Dutch reseller, Andrew's driver of choice is clearly a quality unit and his compact wooden box unexpectedly inert.

But the real secret to the SC5 must be its DSP code. Otherwise the drivers in my Fram Midi 120 also from SB Acoustics also DSP corrected but with a digital input would come closer. Instead the gap was undeniable. A prime enabler of Andrew's full-reveal mode was its refusal to use collagen. I mean those strategic fat injections in the lower midrange and upper bass whereby other designers—or end users with choice of ancillaries—goose response for desired warmth. Absence of typical room involvement from the nearfield position plus steep toe-in/tilt-up plus lower SPL appropriate for sitting so close were secondary enablers. If we invoke body types, the SC5 was a young person's after a religious year of thrice-weekly spin classes. You create leanness, low body fat and excellent cardio. There's no unnecessary mass on the frame, just sleek muscle backed by capable lungs and a healthy heart. If that's analytical and dry, fitness just got a bad rep.

I was surprised by little spotted driver motion even at stout levels during the Mychael Danna cut. How Andrew's amplifier and sealed small-box loading interact appears to make for high innate damping. Then there's a sealed box's shallower roll-off than the 4th-order function of a port. Together it created unexpected sonic completion that telegraphed no obvious lack of bass reach. The same completion applied to textural continuousness. It's common to hear audiophiles applaud bass that stands out as different. The SC5 's doesn't. It's of the same weave, thread count, density and feel. You'll comment on reach you didn't foresee given size, not because it tacks on cyborg brutality or a big bodybuilder's lower half to velveteen mids and silky treble. It's this lack of common bass interference—too massive and thick, stopping late to overhang and blur—that holds the doors

wide open to hear everything else. It's Andrew's "very linear" comment in action. It's my faulty math again; on how lack of extra warmth and weight becomes a true asset to convert minus into plus.

If you wondered about my insertion of Ancient Audio's Vintage Horten, it's for their legs. Ancient's designer seated ¼" 20 bolt receivers in his cabs to attach to any standard tripod. The simple cheese plate accessory at left screws easily to the SC5's bottom to do likewise. Now the cubes could hop off and declutter your desk by standing right next to or behind it. Choose ear height or higher/lower. Lock in down/up tilt with the tripod's head. Given the 3m included speaker cables, imagine where these cubes could go. Just remember proximity. It maximizes their prowess. They're meant for a very specific application. That's where they excel. Use them other than recommended and common sense will tell you not to expect the same results.

Another feature worthy of comment is the external not built-in amp. The loudest part of a room is always in the speaker. It's where rear waves create far higher pressures than the front emissions in open space. Shrink the box to DMAX dimensions. Seal it. Voilà, the same behavior intensified. Would you want to expose electronics to it? Many far costlier actives do just that. Not Andrew's division of labor. Also, active speakers with external power brick for built-in class D often leave their brick live unless it taps a UK-style switched outlet. Today's amp powers down by frontal rocker. You won't shorten its life by careless 24/7. I already killed one laptop-style 'medical grade' SMPS because it couldn't be turned off. Such things matter. Getting them at the Super Cube budget rings bells. Now 1 – 2 = 4?

My award for today's Gigomonsters—garbage in, garbage out—signifies how against €4'000 or €2'500/pr in-house actives, they emerged victorious if we wish to meet our tunes the least censored and most liberated so without makeup or fetters; and don't mean to use premium open-backed headphones to do so. Most desktop speakers get too big when we host a wide display like my curved HP Z34. On a desk 130cm across, these cubes just met that mark. You'll want proper isolation to squelch physical reactions where bass energies won't travel through your structure. Obey narrow directivity and aim them straight at your pink bits. That's it. All the important sound-controlling stuff is hard-coded via DSP and XLR-only amp so guaranteed to translate. In the intended nearfield, the SC5 are boss. Feed them quality like Martin Fröst's Vivaldi or Mychael Danna's KamaSutra soundtrack and be shocked. Feed them crap and don't be. By design, that truism of getting out what you put in cuts deeper than usual. In that sense it's a serious tool not casual toy. It's also very nicely and solidly made. Thanks to Russell Dawkins for pointing the way. We who are about to install these for good salute you!

The Kantos proved perfectly sized/tilted and unexpectedly effective at isolation with their black foam liners on all contact patches so speaker/stand and stand/desk. The very little which still migrated on heavy club beats proved beyond even three HifiStay roller-block footers per stand. Then it looked audiofool grotesque. Below is my final décor-happy setup. I highly recommend these S6 supports for the SC5. To eliminate structural vibrations 100% should probably require floor stands. I just won't bother. I'm far too happy already like that pink porker in the proverbial poo. 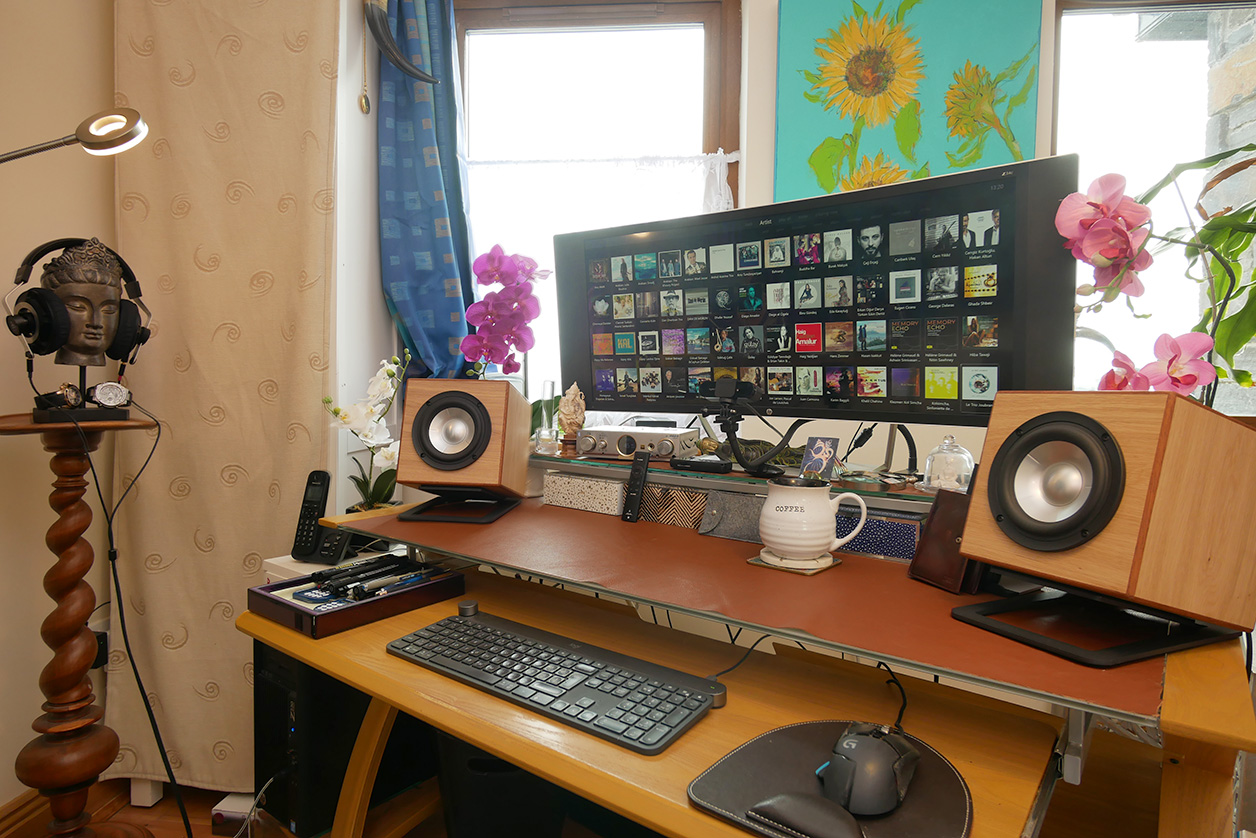 DMAX respond: "Thank you so much for your review. I've always positioned the Cubes for purely professional use. And they're purchased a lot for professional work outside studios in acoustically untreated rooms. A few people purchased them for home listening to music, mostly classical. Perhaps I was wrong? If so, could you advise me who else should I send them to for a review? I don't know the audiophile community at all." – Andrew Startsev

I recommended all the usual suspects. To spread it around, I signed up for a podcast review of the SC5 with John Darko. Why not introduce Andrew's compacts to the darko.audience right away?