Did this imply that Andrew didn't think them suitable for consumer purposes and a related review? When I didn't hear back, I assumed so. I turned the previous page into an industry feature and considered the subject closed. 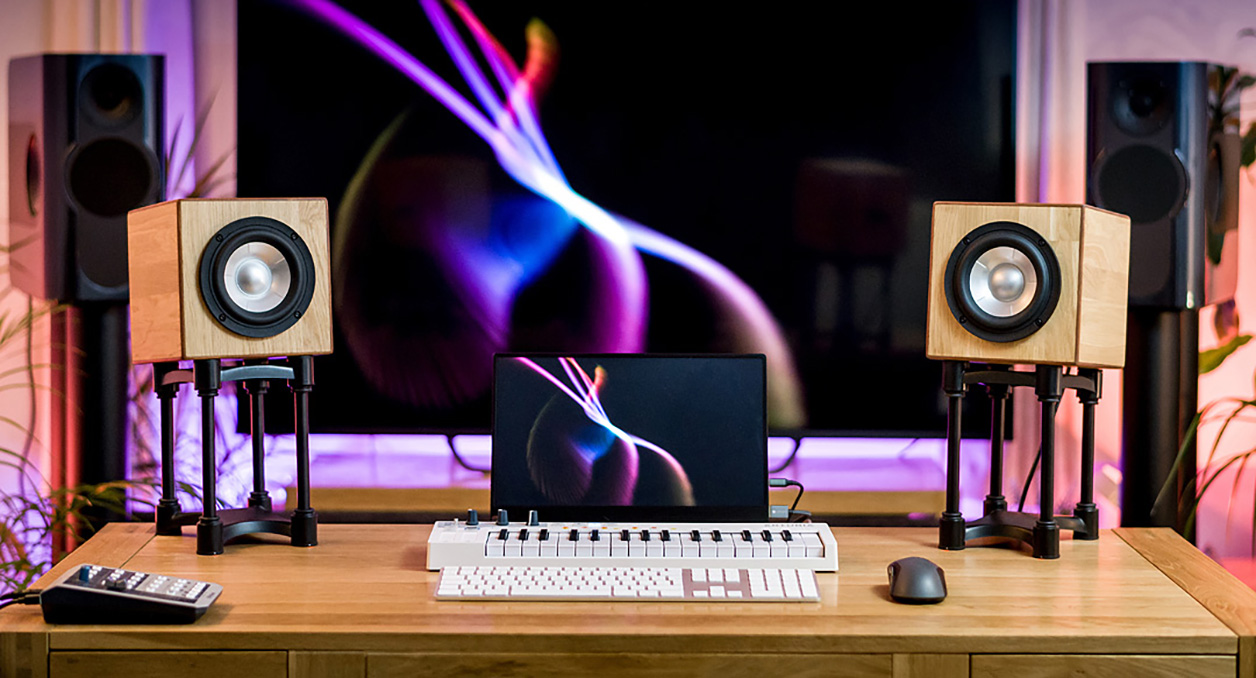 A month passed. Then suddenly Andrew was back. "Sorry for the delay, I can ship you a pair of SC5 for testing if you're still interested." I was so here we are. For users wanting bass extension below 50Hz and/or higher SPL than the SC5 delivers, Andrew has the 261 2 x 6.5" active two-way with dome tweeter; and inside Russia only, the 481 4 x 8" active with ribbon tweeter. The same phase and frequency compensation built into the outboard amp applies. DMAX Audio thus aren't a one-trick sugar cube. There's even a SC5 SE version should you want today's mini in American walnut with ash edging or ash with sapele. If that wasn't enough, the 201 2 x 10" monitor with ribbon tweeter aims directly at hifi users not studio operators and can be ordered in upright/sideways tweeter orientation. "In the 261 I tried to improve all the weak points of the SC5 so they play louder, have wider HF directivity, sound cleaner at LF and give 42Hz at -3dBb. Of course I couldn't achieve the same accuracy as in the SC5 but they get close enough. And due to using two woofers, it was possible to reduce THD even further."

Now foreplay grinds to a halt to jump into listening action. With their super-narrow directivity aka widebander beaming in the treble, aligning the central axes with my ears was job #1. I'd either need risers + face-on toe-in; or a steep tilt from a long front footer + face-on toe-in. With the amp's XLR-only inputs, my usual COS H1 desk-top DAC had to hop off and iFi's Pro iDSD Signature replace it for analog volume plus true balanced outputs. The DAC's AES/EBU input would get PCM signal from an Audiobyte Hydra X+ USB bridge then convert it to DSD 1'024 on the fly. From my J.River-fitted HP Win10/64 workstation, the battery-powered bridge just converts and reclocks USB signal to AES/EBU. This extra D/D conversion/isolation stage between PC and DAC mirrors what so-called audiophile streamers do. It can bring PCfi up to their level. 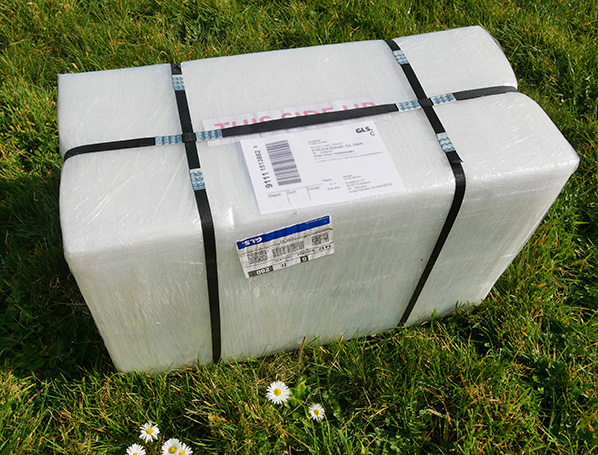 "What's love got to do with it?" Tina the keen speaker shopper wonders. How much extreme resolution and timing precision will still hit passionate love rather than cool respect? Certainly Andrew himself suggested that Turner's famous question will hear the answer "nothing" much of the time.

There's also this mini editorial. It asks what the 'best' driver might be to reproduce the all-critical midrange. We certainly anticipate tonal weight differences even between Andrew's quad 8 and dual 6 over today's single 5 despite them being presumably all voiced for the same mastering transparency.

With the SC5, anyone seeking spare tonal mass in the lower mid/upper bass region for example is almost certainly barking up the wrong oak tree.

GLS delivery was by full foam-wrap treatment so everything arrived spit-shined. My first setup was a bit challenged on cosmetic finesse but functionally ace. It put the SC5 on wooden boxes to elevate their centers to the horizontal center line of my 34" screen. The iFi did its real-time FPGA resampling. The non-descript amp without any footers sat on the floor out of sight. A pair of Zu Event XLR cables and Andrew's speaker leashes connected the rest.

I had instant sound. How complicated should desktop audio get? With these, not at all. Select tune, press play, adjust volume. I hit about 9:00 when airy molecules started to breakdance. The end? For practical matters, absolutely. Just follow the built-in directivity directive. It's (cough) like a gun. You aim it straight at whatever you intend to hit; in this case your ears. 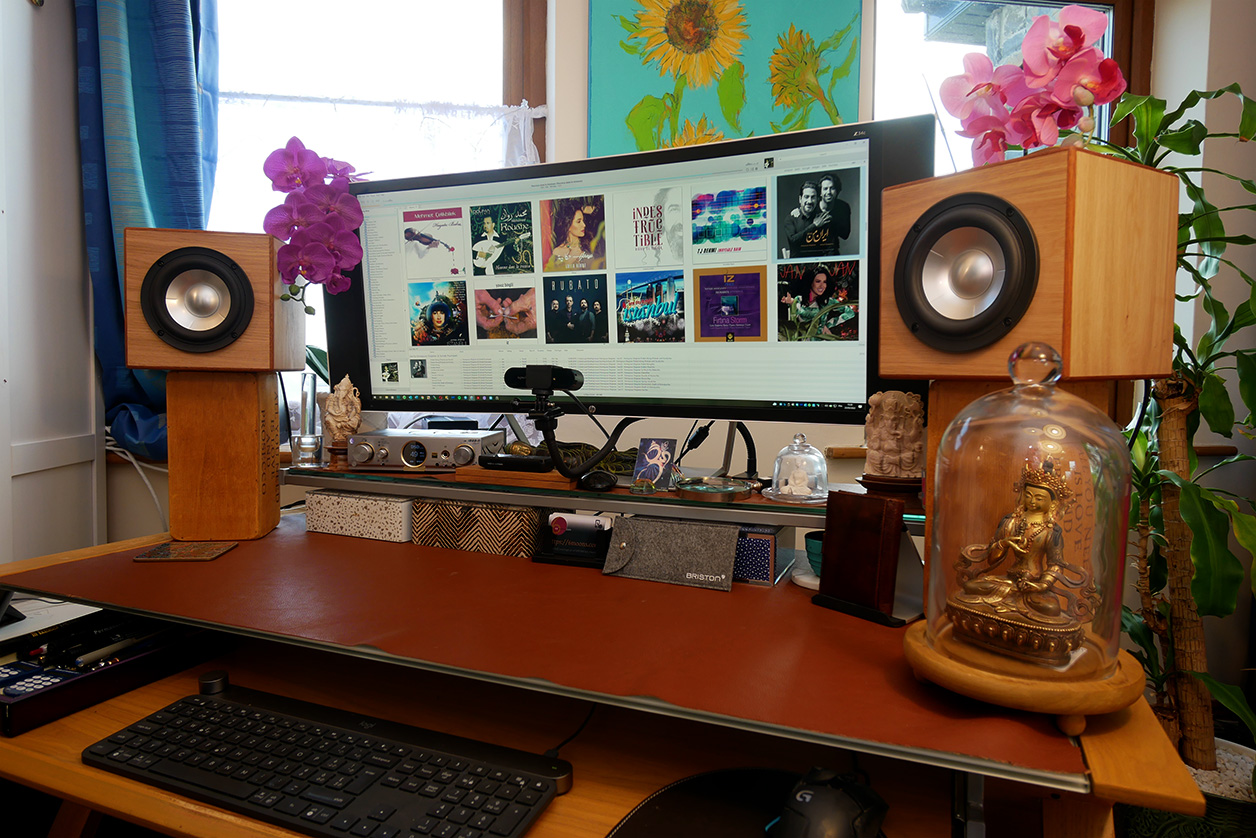 With their intended tonal balance confirmed above to guide the more decorator-approved take below, out rushed the risers, in hustled two Hifistay isolation footers as tilt inserts. Still looking at these nicely edged cubes face-on to see no sidewalls, I also saw no top plate unless I craned my neck. This alignment too was spot on, the sound identical to the above and subjective stage height coincident with my monitor screen just as before. I was all set to go sonic and critical. 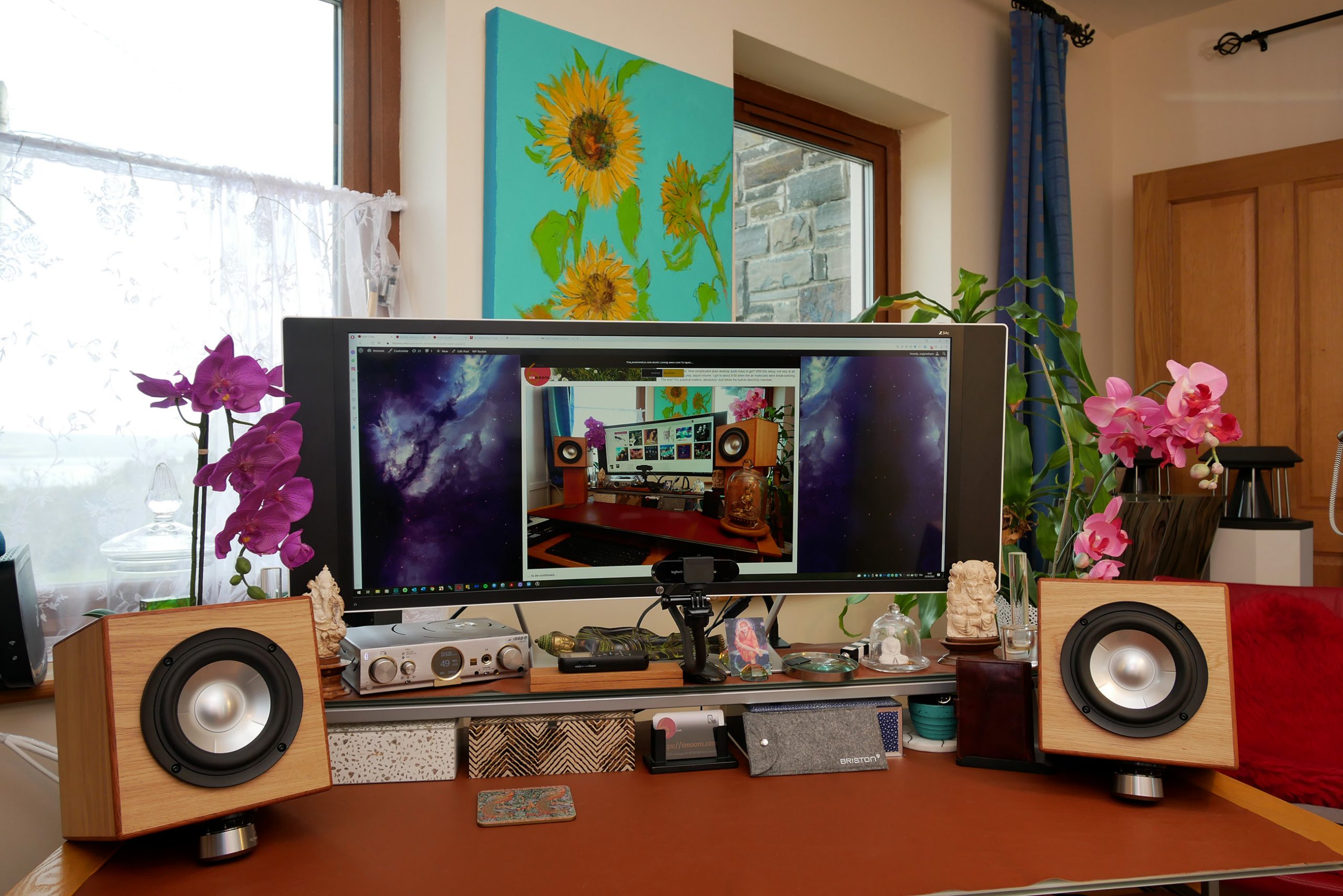