Delivery was in very stout single-box cartons where massive hard foam filled out the over-size space for full-surround protection. Contrasting Hyperion's weight and finish with Goldmund's drab Job 225 with folded sheet metal and cheesy terminals, Denafrips crushed the Swiss. This was true despite Vinshine's margin which Goldmund's pure factory-direct sales model avoids. No matter how tight its belt, Swiss manufacture can't compete against such aggressive Sino pricing. It's a rear-naked choke submission. If you thought Hestia and Hyperion looked good in the photos, getting physical is still another level. The same was true vis-à-vis April Music and Wyred4Sound. Only the Kinki displayed the same material opulence. Ditto COS Engineering from Taiwan. 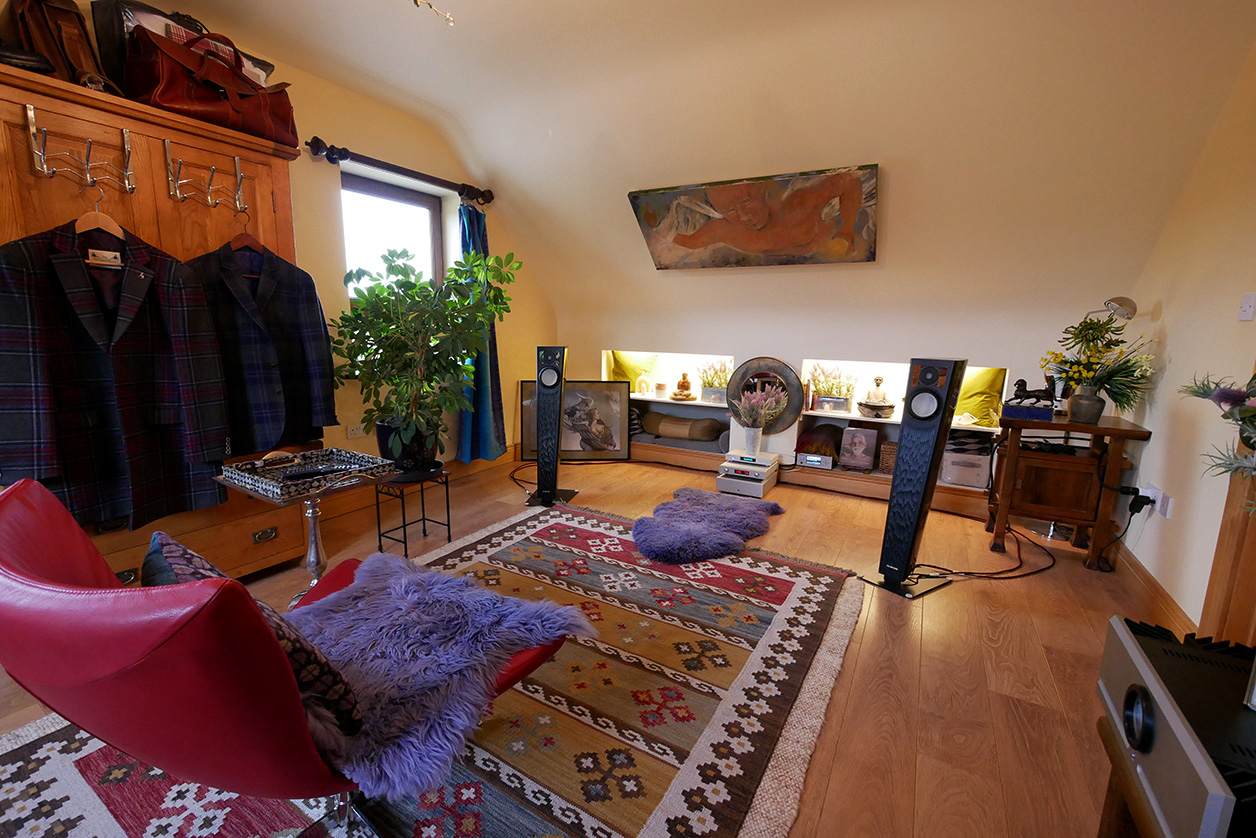 To clock some break-in mileage, the Zhao twins took to an upstairs bedroom system with Soundaware A280 SD card transport and sized-to-match Questyle CAS 192 DAC. With the latter, Hestia and Hyperion created a Mayan step pyramid and a blue/red/blue scheme for displays and power button. Those into accessorized matching will wonder why Zhao's preamp displays red when the 'on' light for his amp goes from red to blue. An elegant styling element is the engraved company name on Hestia's top cover. It handles branding in subdued fashion to keep the narrow fascia clean. 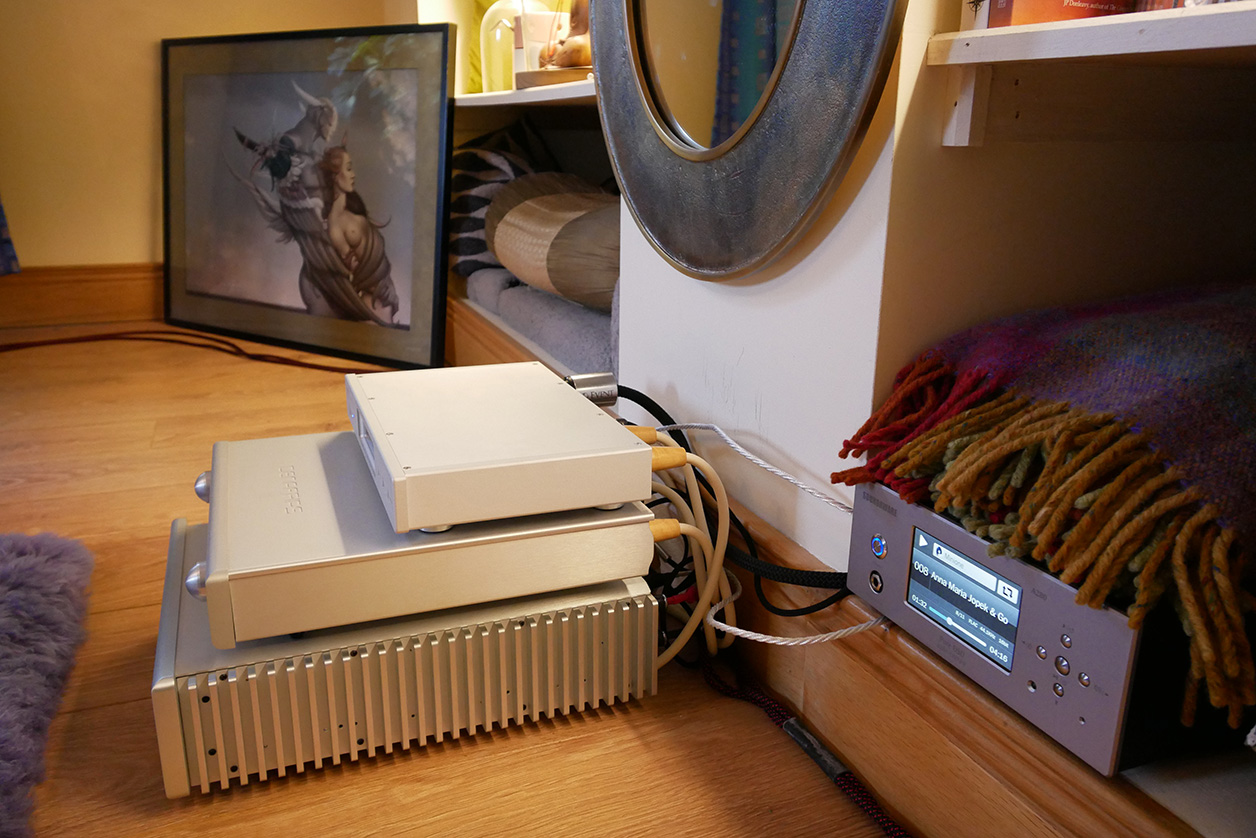 Compared to the Soundaware and Questyle face plates, the Denafrips are considerably thicker.

First sounds suggested a family resemblance to our Terminator DAC, meaning chunky, organic and slightly warm but with excellent depth perspective. Unless this group of attributes rearranged with break-in, it suggested a counter polarity to the Audiozen, Goldmund, Kinki, LinnenberG and Westminster aesthetic of ultra-bandwidth DC-coupled fast sonics. By contrast, this meant a less illuminated treble, less wiry/incisive bass and more saturated mids. Time to work the odometer for 10 days to clock at least 100 hours of solid play without any power-down to give these circuits a little workout before coming back for upstairs seconds, then moving into the main system downstairs. 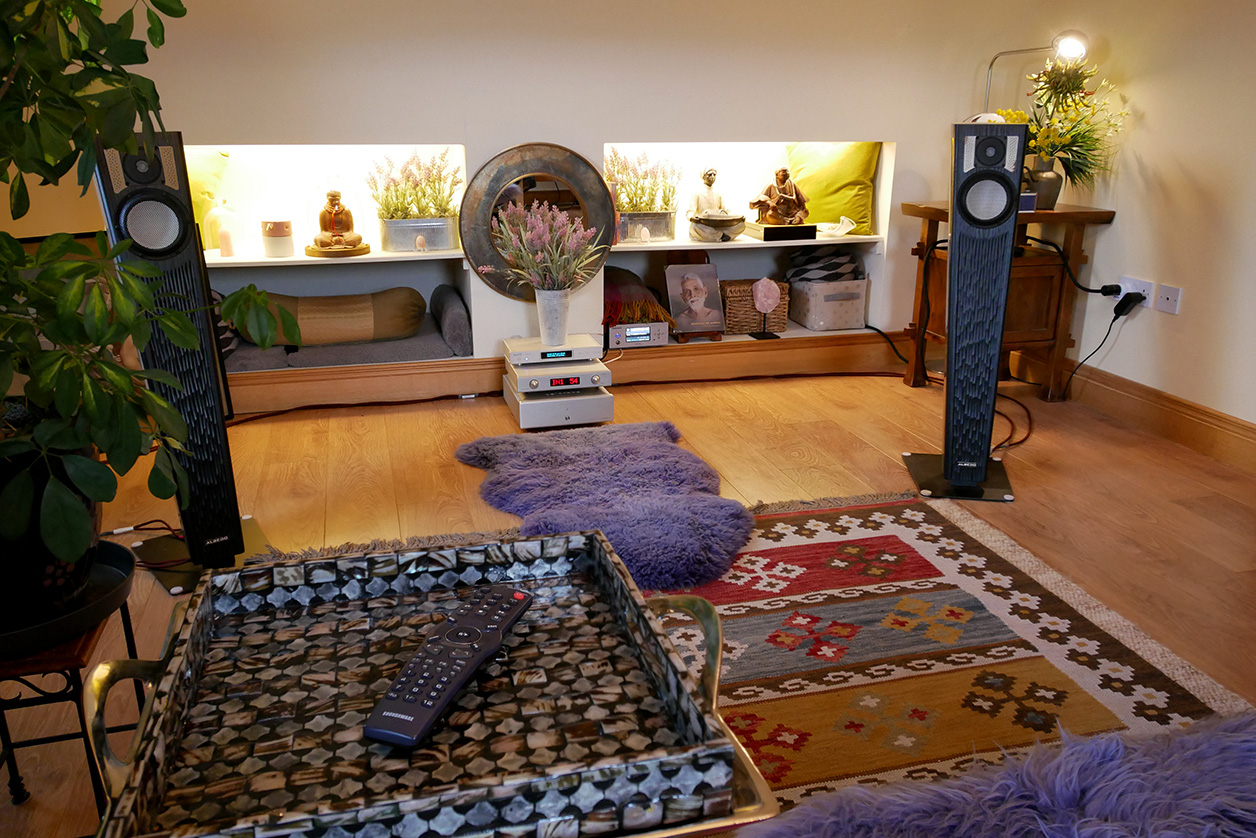 Cooked to well done a week later, first impressions held. Vis-à-vis the usual ultra-bandwidth amps driven off our COS Engineering D1 DAC/pre here—a combo I selected for its extreme intelligibility at very low SPL to work late at night without sound leakage—the shockingly more affordable Denafrips played it softer and less explicit in the treble, chewier/chunkier in general and a bit fatter in the bass. Rather than being dialed for maximum speed, hence litheness and extreme articulation, this sound was fuller, warmer, more relaxed and organic, not hyper driven or maximally exposed. It was time to saunter downstairs where the sheep see bright red not lilac… 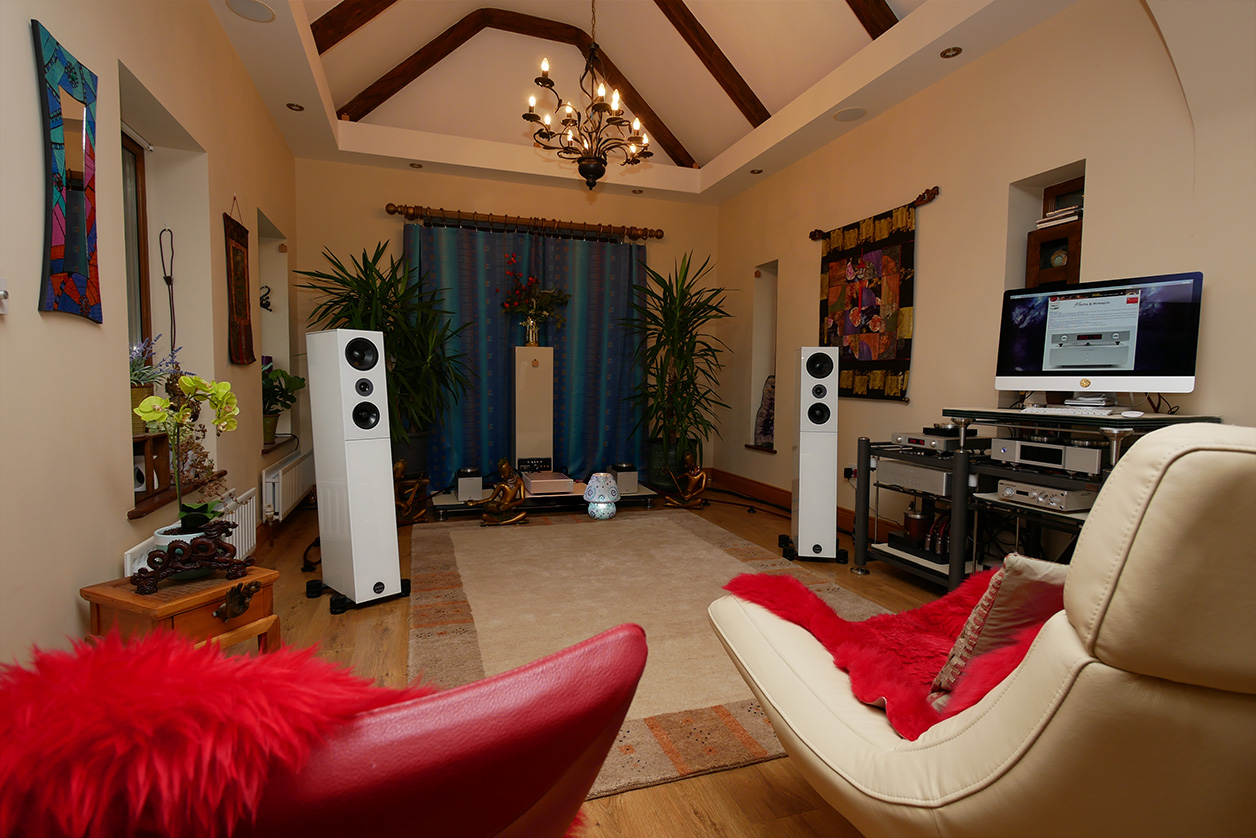 … to displace the Nagra Jazz and LinnenberG Liszt usually at work here. That (cough) is a €28'345 combo. Outfitting the Swiss single-ended valve preamp with balancing i/o transformers eats up a solid €4'350 of that bill – far more than the Denafrips combined. Except for the iMac and Soundaware D300Ref which serves as USB bridge for the iMac or SD card transport without it to output I²S via HDMI regardless, this signal chain now was pure Denafrips: Terminator ⇒ Hestia ⇒ Hyperion. Besides being wider and taller, our Terminator fascia still had the vertical side not upper/lower horizontal bevels. Visually then, the flagship converter wasn't a complete match for the refreshed look of its amplification siblings. 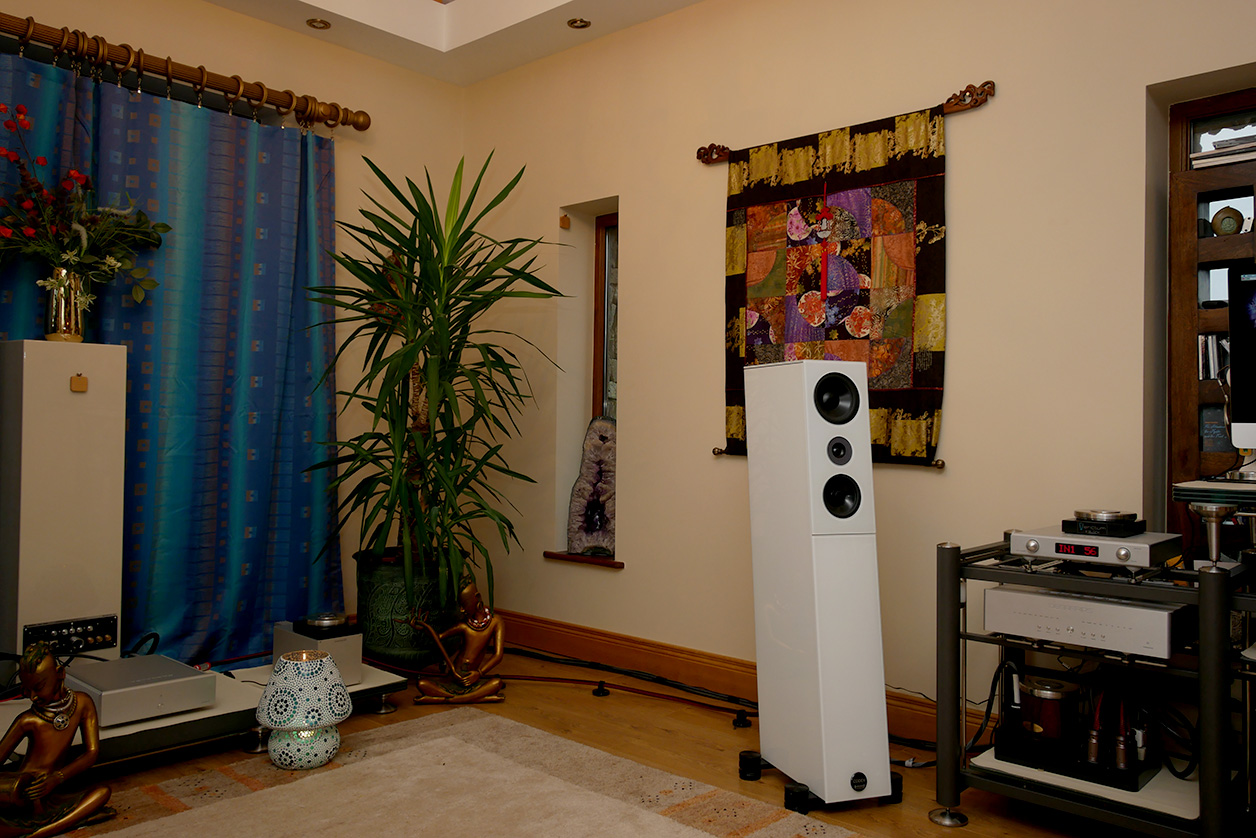 Chances were that future production runs of Denafrips converters would 'rotate' their beveled edges to match. To revisit the company name in case you didn't know, it's a first-letter amalgam of dynamic, exquisite, natural, attractive, fidelity, refined, intoxicating, pure and sophisticated. And to revisit my two basic classes of sound, they simply correspond to musical legato and staccato. Spitty brasses, rapidly plucked strings and most anything percussive represents staccato – clearly separated tones or noises with steep rise times. Those sounds are maximally rendered with fast electronics of high slew rates and high damping to produce nearly vertical transients. In musical notation, legato is represented by an arched line or slur to connect various notes. Those are played in smooth transition without intervening silences. Such sounds are most realistically rendered by less-damped electronics which emphasize bloom and decay. 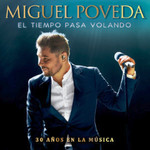 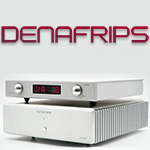 Since music combines staccato and legato elements, our gear is expected to track both equally well. In reality, most systems emphasize one or the other. Now we see that in combination, the Denafrips Hestia and Hyperion fell into the more legato category. This was quickly confirmed against the Classic/Liszt combo which can be moved still deeper into staccato mode when the Nagra preamp is replaced by the practically passive STP-SE II from Wyred4Sound. When audiophiles balance, tune and voice their systems, the perhaps key parameter is where exactly they want their needle to sit on this scale whose end points are staccato and legato. It goes without saying that your musical diet influences your preference. Someone who listens predominantly to edgy electronica will likely favour a quicker more transient-incisive sound. Most lovers of solo piano and string quartets could prefer a fuller more decay-centric softer warmer sound. The ancient advice Know Thyself shields us against absolutes. It reminds us that we enjoy absolute freedom to voice our systems in concert with our own music and hearing. With Hestia & Hyperion, it's not about maximal separation or lucidity. It's about more gradual transitions. It's not about extreme resolution for transportation to elsewhere—a real or artificially generated venue other than our own—but emphasis on physicality and presence in the hereness of our room. It's the "they're here" perspective ('they' being the virtual performers) not the shift to "I'm there" ('there' being the studio, club or concert hall). Hearness.