By design, Spirula needs no stand. For this musical mollusk, floor, low boy or desk are the intended habitats. Not having proper furniture upstairs nor wanting to use built-in shelving to avoid little echo chambers, I first defaulted to Fram's oak tripods as though by audiophile reflex. Topped by plates from Track Audio stands, those met Spirula's foot print. The angled drivers made the stands a little too tall even in the nearfield so… 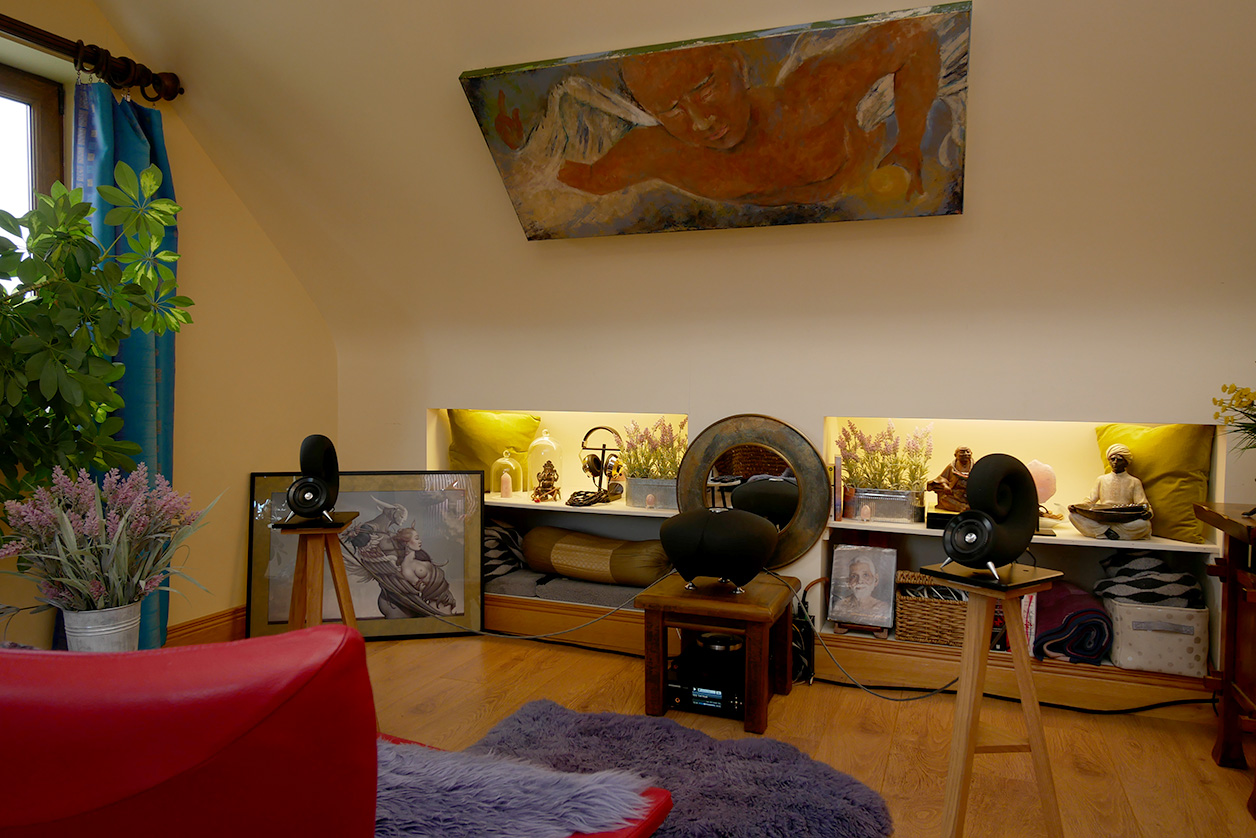 … elevating Spirula's rear spikes to lower their rake was the solution. But then I overcame my rug-rat hesitation. I remembered our bygone tatami/futon era. It could be familiar to many from their broke student days. Plus, wasn't I sitting on the floor whilst meditating? A quick reshuffle later—it turned out that Thunderstone fit beneath the foot stool just so—I heard that their built-in up angle had Spirula stage just above the round mirror sitting flat on the floor, simply on the same plates to protect the parquet. As it turned out, stands were entirely unnecessary. If you want man-size images, foot stools half the height of ours would suffice. 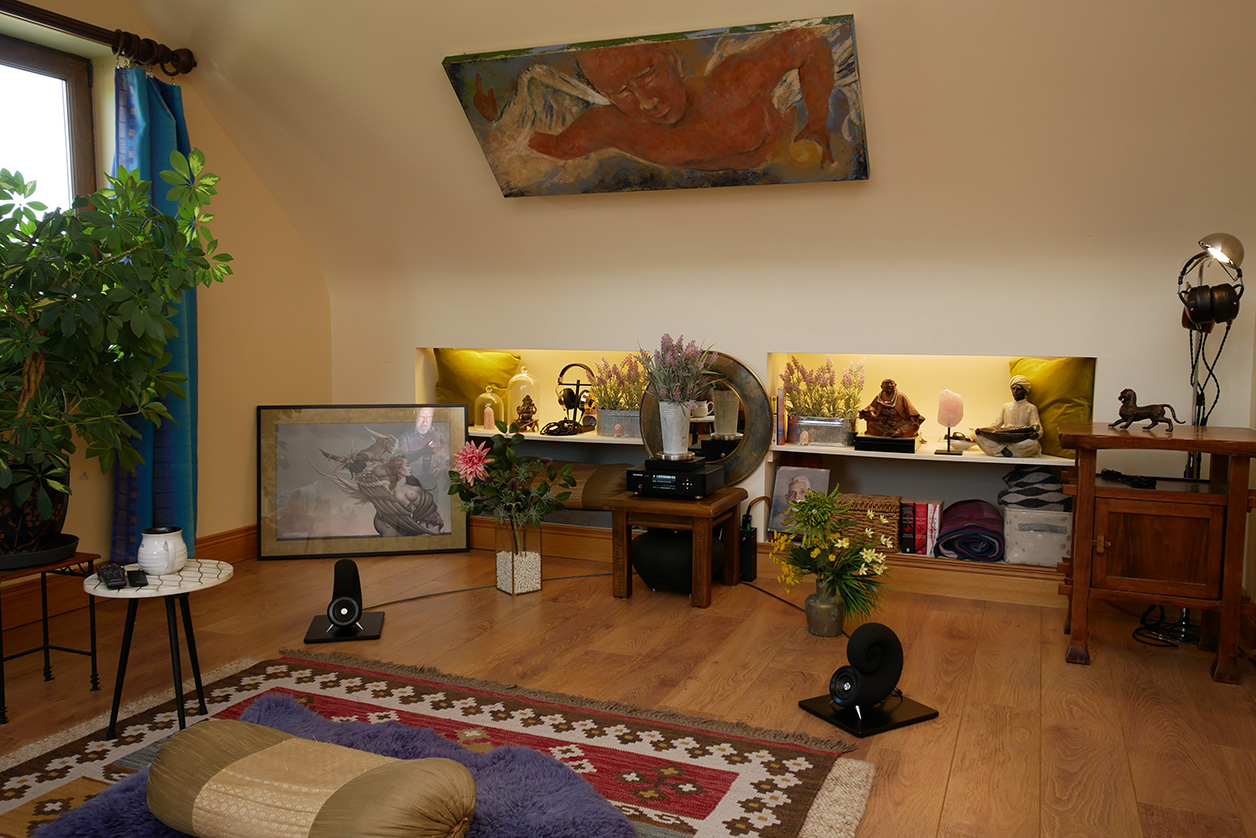 Before we get to listening notes, with intentional design minimalism creating certain practical concessions, Deeptime opted for endless unmarked controls. The only visual feedback for volume is their amber light. During the day at my SPL, that was invisible. Those keen on precisely resettable levels by numbers or sun-dial markers and a fixed bass-to-master ratio must trust their ears and not touch the outer ring again. By automating the turn-on process—signal-sensing power up, standby in the absence of signal after a default duration—a hard shut-down needs a switched power socket. Otherwise one must yank the actual plug. If the system wasn't in standby already, that causes an obvious thump. AptX Bluetooth coding allows for two different devices to share one Ionic system. The Bluetooth source you pressed 'play' on last will be the one that automatically reconnects upon the next waking from standby. Perhaps because the expected majority will tap the Czech rig by Bluetooth and control their master volume in software, there's no IR or RF wand. In the Deeptime, remote controls are passé. As a dinosaur from the Shallowtime whose brain isn't really compadre with the microwave radiation of WiFi, I really missed a legacy wand. Never mind, the sound had me quickly forget it.

The sandman cometh. Tiny main drivers in complex inert chassis meant superlative laugh-out-giddy soundstage enormity. I stood zero chance to aurally identify the location or size of the actual sound producers. The sound simply was. Absence of cabinet talk, absence of secondary sound sources from diffraction and absence of phase shift from a crossover in the presence region all meant purist immediacy that was akin to superior headfi. Despite a high 200Hz hinge, the sub blended very well indeed and was surprisingly potent and taut, hence very different from cheap 'n' sloppy home-theater boomers. The only tell I heard—more in the extreme nearfield of the desktop than in the red chair below—was the occasional wiriness in the lower mids. This band could behave more damped, grippy and striated than the gushy higher range if triggered by certain musical accents. That small textural discontinuity then gave away Thunderstone's otherwise stealthy entrance. Once I sat in the usual chair and no longer on the floor pillow, soundstage height raised to about a foot above the horizontal line marked by the shelving recess. 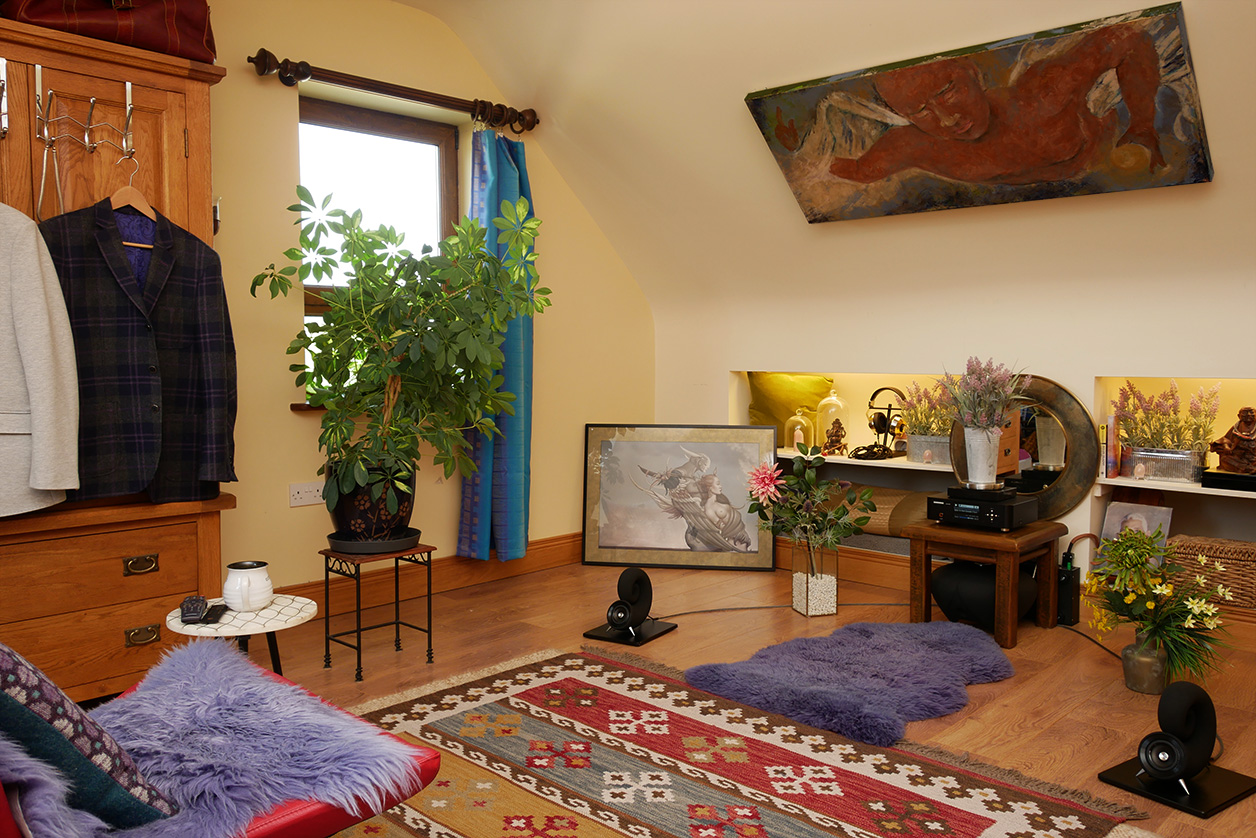 Toed in shallow for a listening seat farther back.

Having recently reviewed two other small widebanders by way of the sound|kaos Vox 3 and Camerton Binom-1, I'd done comprehensive comparisons against traditional multi-ways in our collection such as the Albedo Audio Aptica, Kroma Audio Mimí and Audio Physic Codex. The upshot was simple. On directness as a sense of finger-in-the-socket electricity, the small widebanders all had it over the lot. What happened in the bass, i..e whether they worked full-range or were augmented by woofers, didn't matter. What happened on the very top, i.e. whether they worked full-range or were augmented by a ribbon super tweeter, didn't matter. Key for this immediacy seemed to be that the vocal band and lower treble were handled by one driver of small diameter. Even lower or higher sensitivity didn't impact that result.

Of course small drivers move less air. But particularly in the nearfield—for our purposes, let's call that up to 1.5m—that has direct benefits on clarity and speed, hence resolution. Fine presence/treble region detail isn't stifled by big bass turbulence building up particularly in the room's frontal corners where three surfaces meet. Without that overlay of excess LF energies, the majority band is clearer, hence one mustn't play as loud to hear everything and be immersed. It'd be an understandable but unfortunate knee-jerk reaction to look at the Ionic System and peg it 'lifestyle' in the sense that it's all industrial design without any sonic substance. Dead wrong. It's that plus the audiophile goods. It's sonically more advanced and full-range than the €1'500 active soundgil Cube system from Taiwan was and for it, not that much more expensive.