As it turned out, to these ears Scott's approach was demonstrably cumulative. It also was a two-stage rocket for first one action, then another. My pray'n'tell rig was iMac/Audirvana ⇒ USB double header ⇒ Soundaware D300R ⇒ I²S over HDMI ⇒ Denafrip Terminator ⇒ XLR ⇒ Nagra Classic ⇒ XLR ⇒ LinnenberG Liszt ⇒ Audio Physic Codex. The chase pursued ground noise reduction in sequence of the first four stations. So the procedure was iMac + GC1, wait 10 minutes, play track, remove GC1, repeat track, reattach lead, wait 10 minutes, resume listening, remove lead, listen and so forth until I had an aural fix. Then I added Soundaware + GC1, waited 10 minutes, played track, removed GC1 from both iMac and Soundaware, repeated track, reattached both leads, waited 10 minutes, resumed listening and so on. 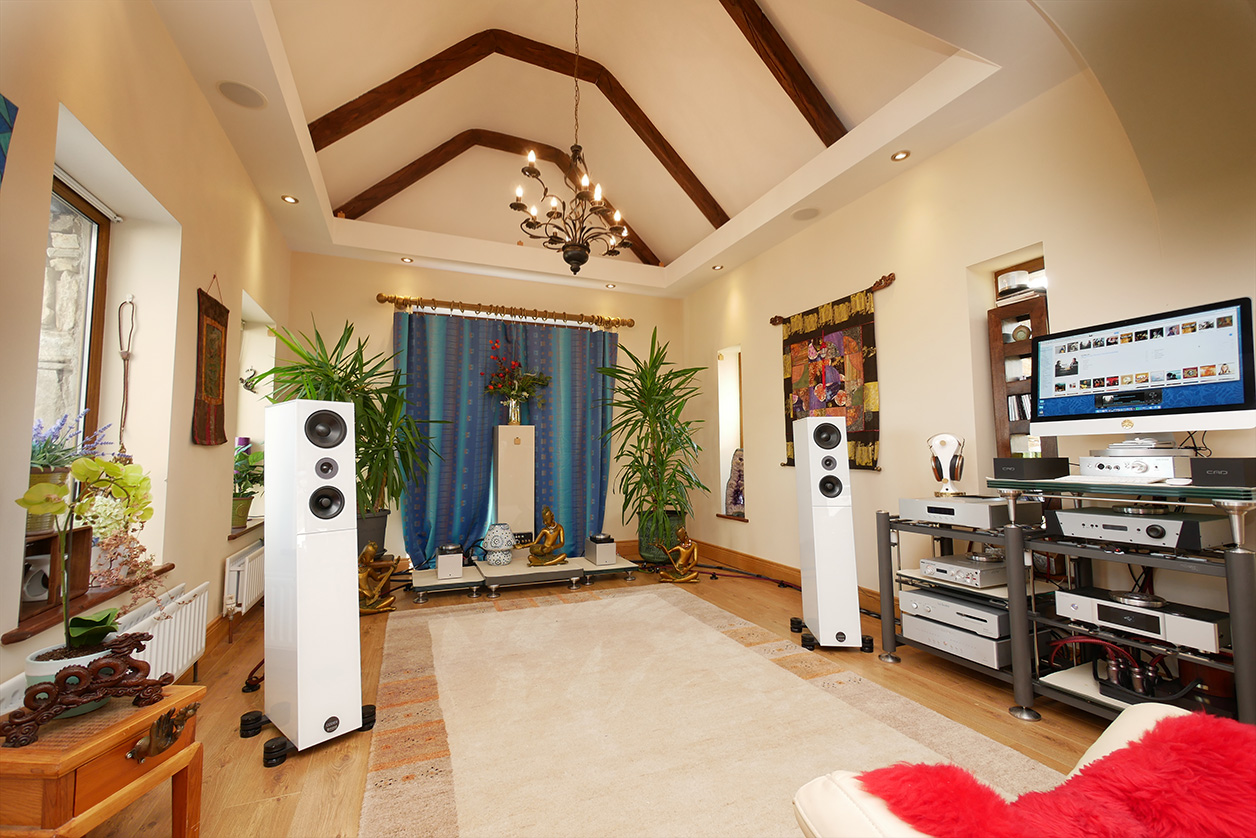 Since I had no notion what I was supposed to listen for, it took me three attempts on the first iMac station before hitting upon a telling track. That was "Ayann" from the Valse album of guitar duets between Pierre Bluteau and Pascal de Loutcheck. This is a joropo style or fast Peruvian vals criollo with the signature rhythm usually played on the Andean charango. Toggling back and forth including those uncommon 10-min. intervals to accumulate sufficient noise drain showed how the Ground Control improved sonics in the time domain. The beat articulation of the guitars became more precise. Their staccato transients began on a sharper 'tat' not the softer 'dud' sans GC1. Try both sounds in rapid succession, tongue against teeth. You'll have the distinction in no time. Now transpose into listening for tauter timing. You'll note how the 'tat' aesthetic which starts and stops on a sharper plosive makes for more specific or emphatic phrasing than the duller 'dud' with its softer beginnings and ends. With only the iMac treated, this distinction was still subtle. When the D/D converter of USB bridge was added—I was still only in the purely digital domain—the effect became more pronounced. Now that I knew where the effect operated, I also knew where to anchor my attention.

Or so I thought when next I added the Denafrips Terminator converter. This unwittingly transitioned into the analog domain to shift the effect onto a different quality. At first I thought that beat fidelity had stepped back. That's because now tone had grown bigger. It's only when I subtracted purely digital grounding that I confirmed how, inside/beneath enhanced tone, rhythmic perspicacity had devolved. It had reverted into something more dull and less articulate. Adding the 2nd analog player of Nagra Classic doubled up on the tonal effect but added sweetness. Re-attaching both digital sources to their own GC1 restored superior beat fidelity. Now I had better timing and fatter sweeter tone.

After a few hours on this "Ayann" number—deliberately picked because I love it as a piece and it's short enough for repeat listening—I was very certain of this two-stage process. On the two digital machines, the improvement focused on the time domain. On the mixed digital/analog and pure analog machines, it applied itself to tone density. Now bled-off ground noise registered as bigger/fatter, then sweeter. For both stages which I thought of as digital and analog each with its discrete gains, having two rather than just one component re-grounded enhanced the effect. I was very happy that each Ground Station could treat two pieces of gear simultaneously. To my ears there was no doubt that in this case, more clearly made merrier. 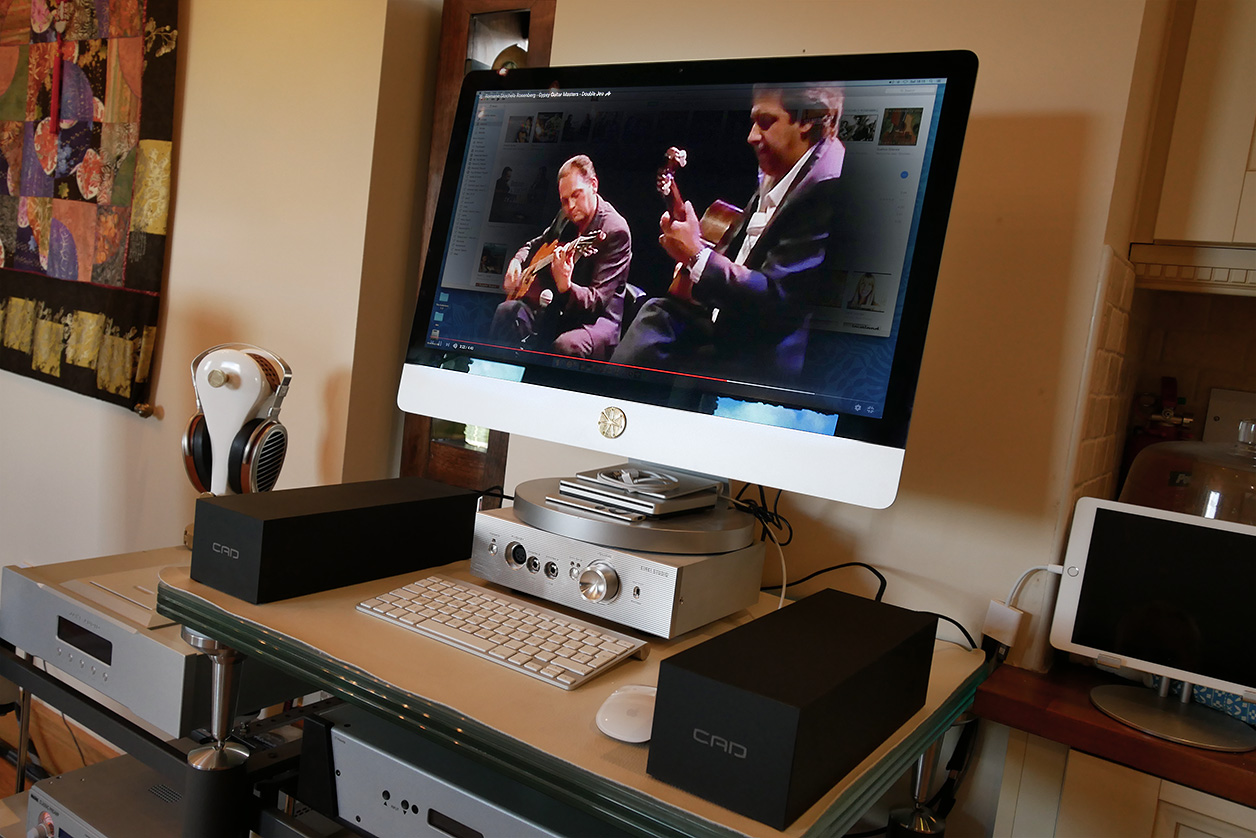 Feeling duly victorious, I transitioned to something just a bit more complex but still purposefully lively in the time domain: "R ' N Bis" from Double Jeu between the two Jazz Manouche guitar maestros Romane and Stochelo Rosenberg. It's a wickedly groovy number and temporally freer than the joropo. But with now a firm fix on where to look and listen, I could reliably latch onto the same effects.

With my first session wrapped, I decided to change speakers to our single-driver Cube Audio Nenuphar. Without any electrical filter or multi-driver integration issues, I expected them to report yet more keenly on the PRaT gains. Because these Polish widebanders sound best on our FirstWatt SIT amps, a SIT-3 with silver fascia repurposed from an F7 replaced the Liszt monos. As a single-ended amp, the interconnect to the Nagra now was by RCA. Everything else stayed put. 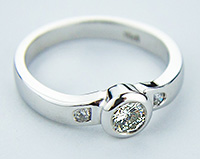 From my first session, especially the improved timing had to be ajudged purely on quality, not quantity. Sadly it tends to be far easier to discern and discuss quantities. More depth, width and height of the virtual stage? More bass loudness or firmness? More treble reach and air? More dynamic range? None of it is subtle. That makes it easier to agree about. But what if someone were to tell you that their system's treble had become more platinum than white gold whilst it started as stainless steel then became silver? Even at a jeweler's, you could be hard pressed to see the difference until presented with four rings and a magnifying glass. If we apply it to the treble, it's not about more extension, brilliance or penetrating power. It's about a subtly different textural quality.

Here value judgments diverge. With more dynamics, we can all agree they're superior and more desirable than compressed dynamics. The game of textures is more subtle. They can be harder to spot, even harder to pin a value on. Once we invoke timing, it can get harder still unless you're a drummer or bassist trained to listen into it. Should your own perception hierarchy track mine, I'd advise that when you first experiment with the GC1 on purely digital sources, don't listen for quantities. That will have you look in all the wrong places and miss. Tune instead into the rhythmic feel as though it were a BBC news anchor. Watch for the qualities of musical enunciation, the clarity of transient pronounciation. Your own "Ayann" track of something structurally uncomplicated but rhythmically interesting and varied should help you land your first catch. After that it gets easier and easier.