Six degrees of separation? A pocket protector tells us of silver's just 6% conductivity lead over copper. But the real world throws contact resistance into solder and screw joints; yet more and more contact resistance between the imperfect surfaces of even mirror-polished connectors which under the microscope look rather pitted. It matters not whether those are RCA or XLR plugs and their sockets, bananas or spades and their binding posts or other joints like BNC, HDMI or USB. It should be far more relevant to worry over avoidable contact resistance—oxidized connections and loose fits—than metalurgical differences in measured conductivity between base metals or fancy alloys. Enter Kang Su's disdain of solder or screw joints. He even shuns cold welding aka high-pressure crimping. Instead he melts his conductor and connector to become one unbroken hot-welded continuity to avoid the usual contact resistance of such joints. Then he pays extra attention to design connectors with high innate tension for the firmest possible contact. These aren't esoteric frills but mechanical basics. The idea is to make firm conductive handshakes with the least amount of air gaps to avoid invisible micro arcing and high resistance. It's a decidedly no-nonsense approach without quackery.

Speaker cables deliver amplified current to your loudspeakers, power cords current to your electronics to make the latter extensions of their power supplies. Here gauge is a measure of conductive mass as applied to the job. For the ZL-8000S, that conductive mass increases to 18mm total Ø over Allnic's two pure copper speaker cables at 12mm/16mm respectively. Would that mean audible advantages in low bass and overall dynamics?

Laws of relativity. Not doing mono—Einstein after all means one stone—we leave Albert to astrophysics. We instead remember his audiophile cousin Anton Zweistein (two stone). Anton's far more obscure law of relativity states that sonic perception depends on personal bias. What's nicely damped thus precise and controlled to one chap is dry and rigid to another. What's elastic and bloomy to the second is loose and fuzzy to the first. Each assigns a different value to the exact same observation. Two extra listeners would describe two more shades of grey. When I reviewed Grimm Audio's SQM cables and compared them to our CrystalConnect Ultra, I found myself smack in Anton's realm of audiophile relativity. I heard zero change in tonal balance. Yet the silver Crystal links were more damped and dry, the copper Grimm versions more flexible and fluid. This was a subtle but repeatable offset. My descriptors leak bias. That's because by a small margin, I preferred the Grimm. My alter ego Sergeant eBay would have fancied the Crystal more to call out the Grimm as less precise and taut, the Crystal as the more accurate and bouncy. Same difference. 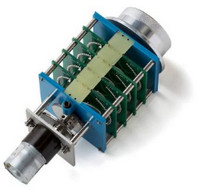 It's a good preamble for today. In the absence of shifts in frequency response, differences still factor in the texture and time domains. That's like acoustics. A very echoic church sits at one extreme. It represent softness and blur 'in full bloom'. Excessive decays overlay their causating transients for massive smear but very rich tone. A meadow concert with no boundary reinforcement occupies the other polarity. There are no decays. The musical cadence is far more enunciated and clipped, tone far smaller and drier. Ultra power and extremely low output Ω can situate themselves closer to that aesthetic. A flea-power zero-feedback SET with high output Ω and the wrong speakers moves closer to the church. 99.9% of all systems fall somewhere in the middle. That remains vast enough of a playground to offer many variations on the theme. In my experience, silver cables that weren't deliberately tuned to be bright and impulsive still tended to a more damped controlled accurate 'fast' feel. Copper that wasn't voiced to be fat and massive still showed as the more soft, dark and bloomy. Beyond those changes, there's raw resolution of micro detail, nuance and hue. Which cable is quieter to have you hear more?

To overwrite for maximum loudness back on the textural aspects, it's Big Fluffy the slobbering fat pooch versus Lockjaw the junk yard's wiry and snarling Rottweiler. Now going into this assignment, we have my expectations.

In the photo, we saw Kang Su's constant-impedance bridged attenuator with 61 oil-clutched steps and remote control for another example on how he designs serious solutions to tackle common audio challenges. Gel-filled tube sockets to eliminate microphonics in his valve gear are another. There are a lot more. So Allnic Audio ZL cables aren't from a cable-only house nor garage-based entrepreneur. They're from an experienced valve-circuit designer whose portfolio includes tube-based phonostages and headphone amps as two component classes where self noise is hyper critical. It's why like step-up transformers for vinyl gain, his interconnects adopt Mu metal for shielding. From all of it we expect that the ZL-8000S massive duraluminum splitters aren't just for luxo optics but also have practical utility.