Pressing luck, occupying high-power solid state was next. Out with Nenuphar, in with Codex by Audio Physic. Out with SIT-1 and AMP-13R, in with Liszt and nCore 500 by LinnenberG and Nord Acoustics. After hearing the absolutely tremendous pairing of L-10000 + Liszt, the class D monos disqualified themselves. They sounded comparatively flat and stale. Dead.

Tailing Allnic's direct-coupled bottles with high-gain class D's absentee noise would also amplify any/all preceding noise with impunity to loudly ask for trouble. Yet trouble stirred not. On that score, the match was a disquieting success, even shock. What disappointed because much better presented itself one amp over was the constriction of that fluid breathing gestalt which managed to get past the ultra-quick 1MHz LinnenberG monos through the complex 4-way filter of the Audio Physic. Granted, that wasn't as developed as it had been with the zero-filter widebanders. But that would have been lusting after the impossible. For visualization's sake, imagine the tubular contributions as slightly inebriated citizens celebrating out in the streets of a medieval city ringed by fortressed wall. The nCore amps had our revelers indoors on curfew. Just a few flickering party lights escaped through windows. Why the lateral Exicon Mosfets of the Liszt maintained the wall which the preceding Nenuphar sessions had punched big holes into; which earlier sessions with Tektron's triple tube-rectified 45 or PX4 SET had demolished to rubble entirely… that was due to complex analog filter networks, then transistors not tubes controlling the speaker inputs. Their signature damping telegraphed by virtually containing the tubes within their grip. That maintained a solid-state outline or shape of the sound whose innards were tube-based. 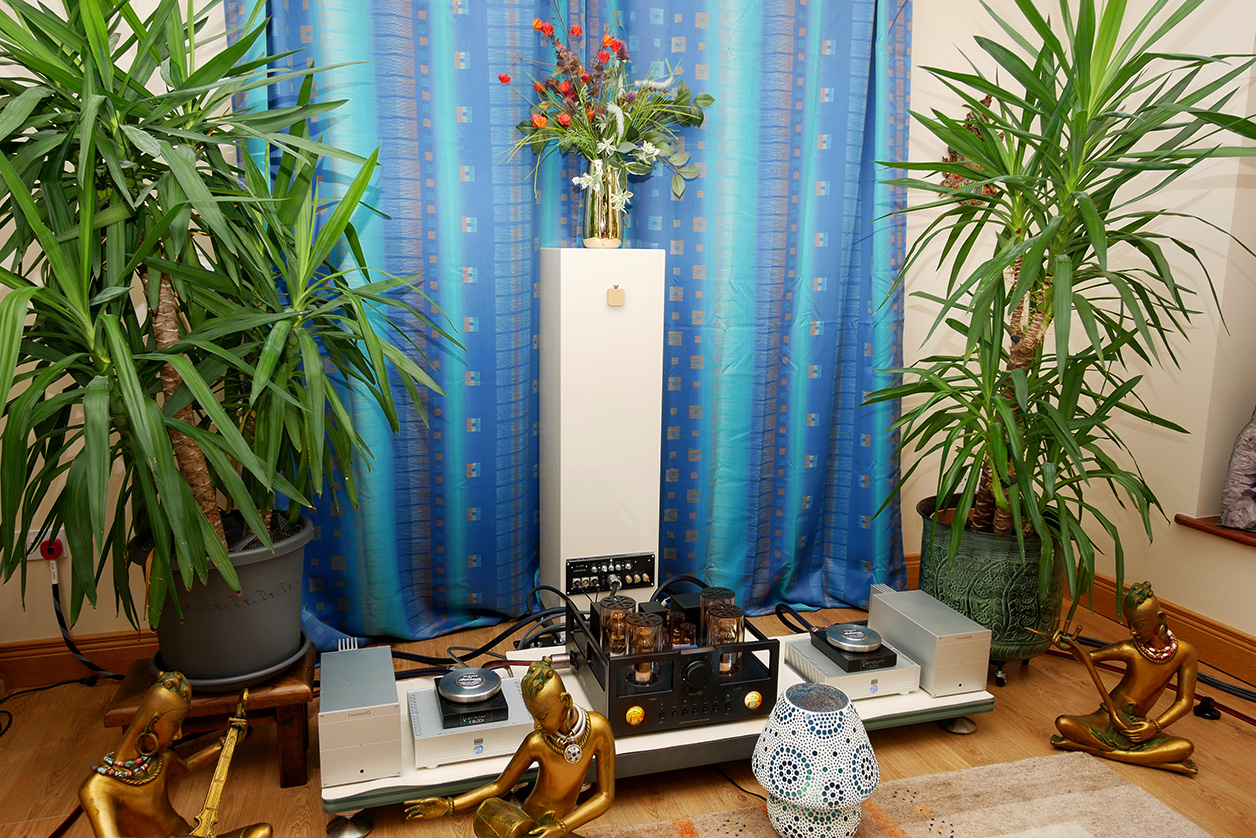 'Converting' transistor amps even as minimalist as Nelson Pass' SIT-1—single stage, no feedback, no degeneration, simpler even than the most purist of valve SET—into quasi hybrids with Allnic's L-10000 preceding them still wasn't the same as a pure tube SET on ultimate gush factor. The transistors held the advantage on bandwidth; on bass control; on more tautly sprung beat-driven angular music. Since much music I fancy falls under that spell, the strategy of "big triodes in the preamp, minimalist transistors in the amp" was actually more ideal than pure tubes. 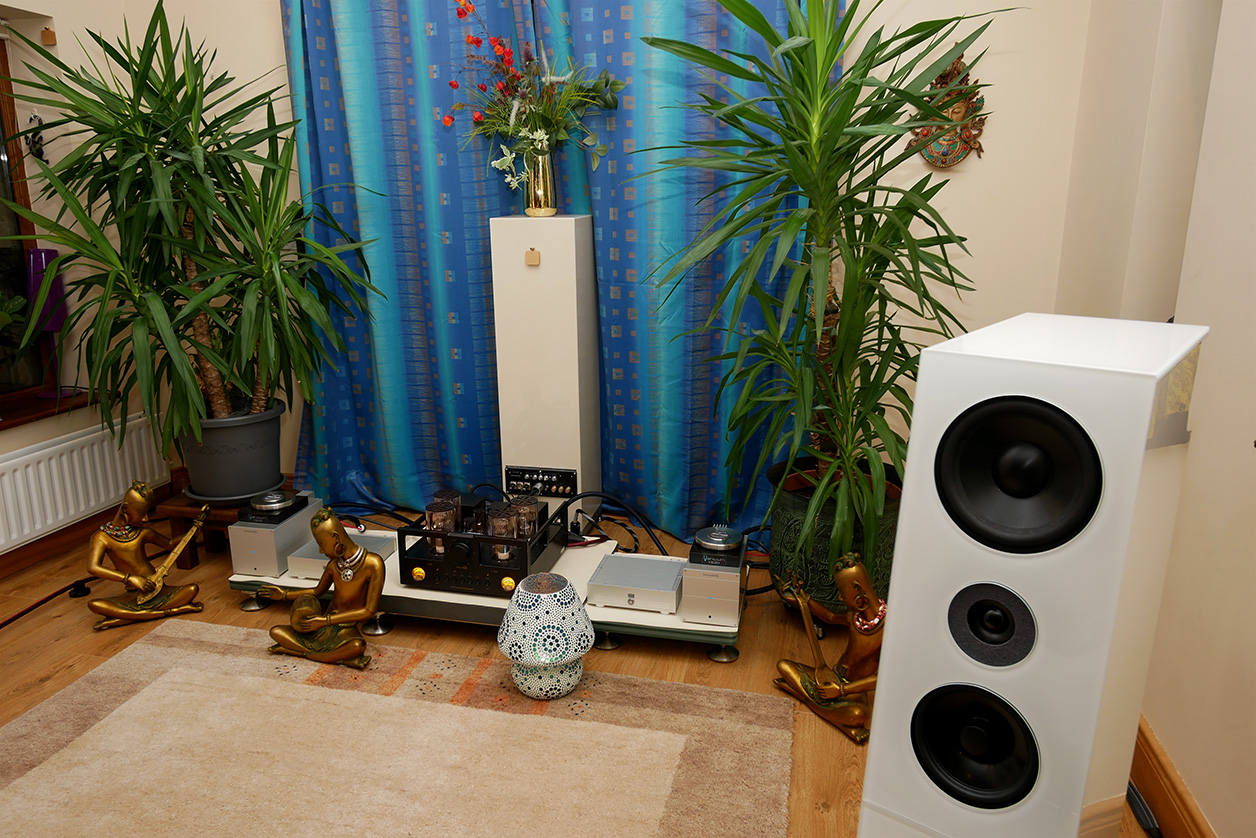 Part of the equation is the speaker. No matter how good, a 4-way like ours inserts a complex phase-shifting time-delay buffer between amp/s and drivers. Hello unavoidable passive crossover. It undermines the filter-free directness of a purist widebander. On my beat, utmost gush—musical immediacy and its resultant state of emotional communion—meant SET + widebander with compromises in bandwidth and amplitude linearity. Slightly less gush with full bandwidth and linearity meant hybrid + widebander. Here the hybrid could put tubes and transistors into one chassis as the just-reviewed Thöress EHT had done; or spread them out across two boxes like we did today. Slightly less gush again but with even bigger bandwidth meant hybrid + multi-way. Further reductions assert themselves when big triodes in the preamp shrink small to 12A_7 types as in our Nagra Classic. Where on this sonic scale one wants to be depends on personal taste and the type music one consumes. Simple intimate fare cottons to maximum gush without any toll whatsoever. The more complex, bass heavy and bombastic music grows, the more superior amplifier damping, bandwidth and low-impedance dynamic stability factor. That's where strategic hybridization with Allnic's L-10000 enters. Married to a suitably transparent fast solid-state amplifier ideally suited to your speakers, it  injects the maximum big-triode aroma such a combination can hold. Yet it keeps perfectly stable on all of the musical styles our 21st century offers. Isn't the promise of a hybrid to marry the best attributes of its mixed parentage? To my ears, the L-10000 was the perfect half of such a one.

The ideal other half of my hybrid wasn't a traditional tube amp. Allnic's PX25 SET monos were that example with all the customary shadows of output transformers on bandwidth, speed and immediacy. It wasn't our class A massively paralleled Pass Labs XA-30.8. It was DC-coupled ultra-fast class A/B amps from Bakoon and LinnenberG which best complemented the L-10000's speed, lucidity and resolution. The only 'evidence' that Allnic's low published S/NR spec wasn't a typo or otherwise held itself to far more rigid standards than the competition was that for full glory to kick in like a turbo, I had to play things a bit louder to cross the usual threshold of our Wyred4Sound line stage. It didn't mean loud per se, just louder. For whisper sessions, our Wyred and Nagra were superior on intelligibility. Once the L-10000 crossed into its zone, it was simply game over for my alternates. 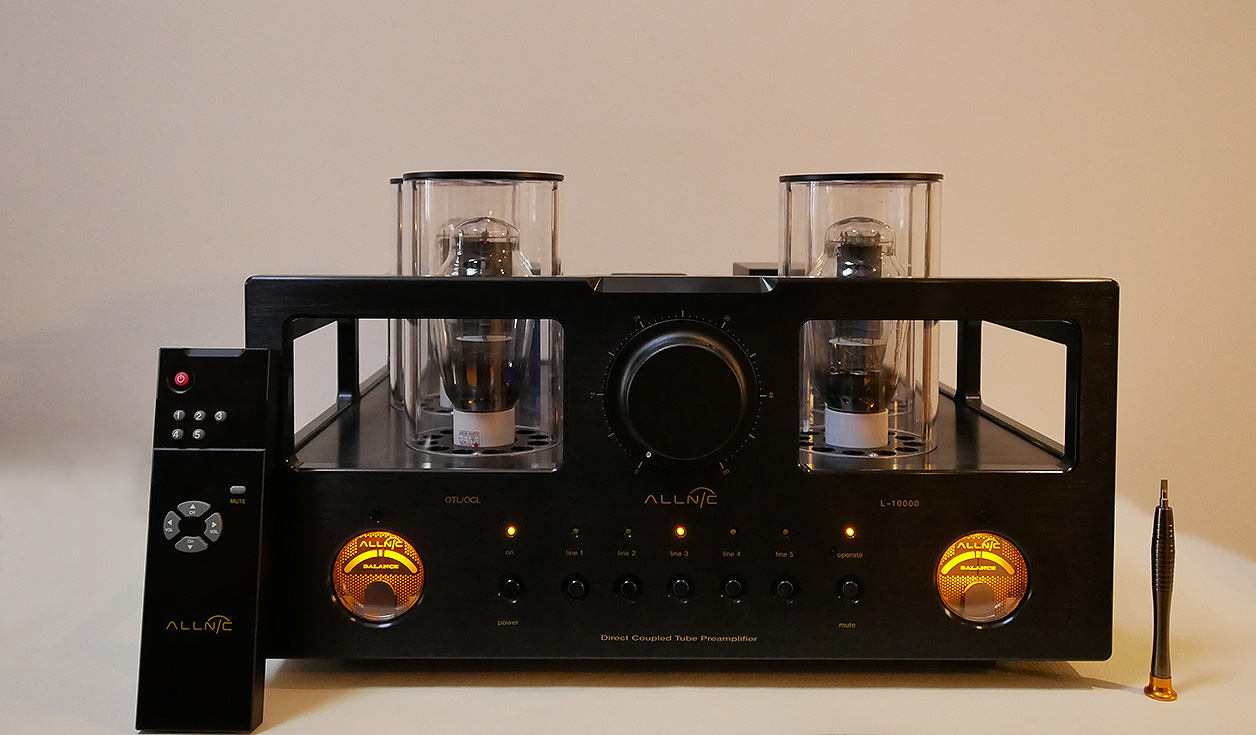 That's my exit sign. Game over. It was time to have Live Fidelity issue a call tag for the return shipment. Unlike most returns where we own close alternatives to avoid withdrawal pangs, this one would smart. We had nothing in inventory that did what Allnic's flagship preamp does. Of course my inner wtf—wishful thinker fan—would prefer ¼th the price and tubes, the latter to lower maintenance fees. But without its rare triode/pentode 6AN8 inputs then common 12AU7 drivers, the L-10000 wouldn't sound as it does. Otherwise its designer would have embraced a far simpler circuit. Without doubling up for balanced drive, its THD behaviour wouldn't be what it is to transcend the usual signature of big direct-heated triodes. So Allnic's L-10000 remains out of reach for most and beyond the sphere of even interest to those who view valves as passé and irrelevant; an exotic anachronism in an age where digital volume control has many shun the entire preamp breed altogether.

But for the lucky few of sufficiently deep wallets and independent ears who trust themselves over magazine measurements, Kang-Su's very best all-tube preamp will be that mythic missing link which finally proves that oft-read claim that triodes are the lowest-distortion voltage gain devices known to man. How we shall miss thee!

PS: With Western Electric's reboot of 300B production imminent for 2019; with Takatsuki/Japan and Elrog/Germany ongoing boutique sources; ditto for Emission Labs, EAT and KR Audio from the Czech Republic, JJ from the Slovak Republic; Sophia Electric from the US; Full Music/TJ, Psvane and Shuguang from China and the New Sensor labels from Russia… choices for current-production 300B abound. There's zero justified cause then for hesitation about availability. Antiquity is back with a vengeance you might say…