The Allnic speakeasy wasn't an illicit booze shack from the Prohibition era but easy tell between ZL3000/5000 speaker cables. Even on Nenuphar's single drivers, the thicker heavier wires played déjà vu to their power cord equivalents if so to a lesser extent. That felt sensible seeing how they only affected the amp/speaker connection, not every single component like the cords. But the effect was comparable. The ZL5000 leashes sounded heavier and somewhat darker, quite as though the tonal centre had downshifted. Listeners prioritizing air, sparkle and sheen might favour the slightly lighter 3000 reading. Proportionally, its treble seemed just a tad more apparent. Conversely, those sensitive to color depth would fancy the 5000's darker spectrum of black values. Darker inks meant weightier lower registers. Those led to a suggestion of warmth not by way of triode-type 2nd-order octave doubling. This effect seemed to subtly emphasize the fundamentals and minorly shade the upper harmonics in trade. Because the latter illuminate the domain of ambient reflections which the ZL5000 toned down with that proportional shift, my attention was more on enhanced substance, less on spatial detail. Much of this was on about how the music felt again. Different listeners will approach this through the alternate polarities of light dark, heavier lighter, relaxed energetic, physical spatial. Either way, those balances will move over a few clicks: bigger, more grounded and majestic for the 5000; quicker, more illuminated and intimate for the 3000. Because I'd not yet heard from Kang Su on what distinguishes 5000 from 3000 models other than optics, size and price; and because his global reseller still didn't know; I finished listening and writing this without being none the wiser. My bet for the dearer versions was increased conductor mass. If so, that would simply imply more copper, not other alterations to the basic designs of ZL power cords and speaker cables.

As it turned out, the ZL5000 benefits from a different oxygen-free copper sourced from Japan (Kang Su doesn't believe in 'single-crystal' conductors); more copper mass as suspected; and different metal plating.

Sequential sequitur. For my best attempt at weighing the relative contributions between my loaner versus residential Allnic lot, I'd rate the magnitude of gains with the AC cords as twice as high on the amps than source gear; and that of the speaker cables about double over one source power cord upgrade. I can't use either cord on my two wall junctions because Allnic at present don't offer a UK plug; and because a Swiss UK/US adaptor created far too wobbly and unsafe a fit. Logic dictates that the wall-to-conditioner or outlet-multiplier cord will be the most effective. Disregarding that, high-draw amps are next, then speaker cables, then cords on the low-draw source gear. From my experience and observations, that's how I'd stagger my cable upgrade plan with the type specimens under consideration today.

Conclusion. It's not exactly common to see an engineer acknowledged for his valve-audio designs spanning from phono to headfi to converters, preamps and power amps also enter commercial cable production. Yet the success of Allnic's ZL loom seems rooted there. Cables could be scientifically engineered purely on the test bench to conform to a target set of measured inductance, capacitance, impedance, bandwidth, propagation speed and signal loss. Valve audio's routinely less than spectacular measurements must incorporate extensive listening to lock down a final circuit. But the pursuit of ultra noise-critical phonostages executed with tubes also demands first-rate engineering backed up by test kit to apply it. Unlike many smaller boutique cable houses then which do listen but couldn't design a premium amp from scratch nor own precision measurement kit, Allnic's loom would seem built on all of it. With his background, I also suspect Kang Su's listening skills to be more developed or refined than those of most boutique cable wranglers. Now leaving my self-imposed seclusion from coin think behind—hello real world—how to justify costly cables? Never mind that. What's far more relevant to ask is that if one had the requisite means, wouldn't those be better applied to upgrading one's electronics or speakers instead? 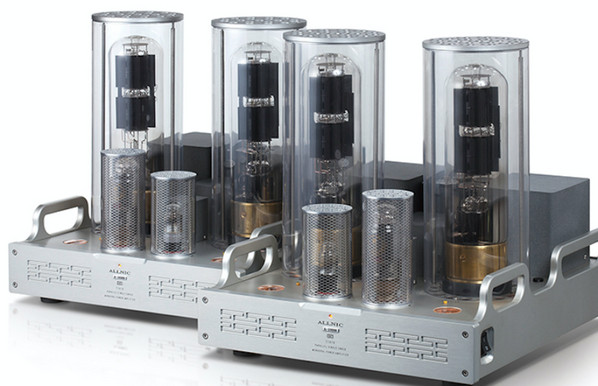 To my mind, not past a point. Once an amp/speaker pairing perfectly plays a given room, anything more goes south or at best sideways. Instead, optimize the performance of your existing hardware. You've already matched it to your tastes and space. Make your hardware marriage work at its peak. Why run after overkill, bling or mere change unless said marriage had failed irreparably?

Optimized performance considers resonance control from proper equipment racks; power delivery from superior conditioners/filters and power cords; minimized signal loss from the cable loom. Naturally it's basic human psychology to prefer spending coin on chromed amp chassis or a hi-tech DAC over mere cables which hide behind a rack or snake along floorboards. But what if superior cables made demonstrable improvements at a magnitude equivalent to or exceeding reasonable upgrades to other hardware? Shouldn't reason now trump emotional impulse?

If you've arrived at that place where you want to explore hearing more from your existing electronics and transducers, Allnic's top ZL loom would be a strong contender. If you're still chasing bigger speakers, more dazzling tweeters, beefier amps or octa-DSD DACs, it'll remain off your radar; or perhaps on it only to ridicule the entire notion of cables beyond the Electric Emporium. But the latter is possible only if you've not heard these. Once you have, ridicule will be dead and the joke on you.

Granted, you may still not want to buy these. That's as always personal, how highly one values a particular improvement and what our existing hifi investment is in the first place. We all nurse our own notions about what seems reasonable relative to allocating expense percentages to each hardware category. Either way, you won't be able to laugh these off. At best you'll consider them unreasonably effective and unreasonably dear. Truth told, it was far more fun to hide in the Bite Me zone than at the very end cater to 'justification' again. Yet taken solely on its sonic merits, the Allnic Audio ZL5000 loom very much is its own justification. That's from someone who recently reviewed a premium preamp and pair of 200-watt monos which together cost less than two of these ZL5000 power cords. So yes, high-end audio remains as colourful and vexing as it's always been; and cables can have potentially devious impact, particularly the love-to-hate class of AC cords. Forget rational explanations and irrational justifications. Your ears will tell you all you really need to know. You simply must try things out for yourself, not hide behind prefab beliefs. Particularly top power cords can make your system sound more powerful and big. Really!