June 16th, 2020. Checking in, I learnt that Corona-related layoffs had delayed the Adamantis project by placing the two principals in hands-on mode to fill burgeoning Stilla orders on the production line. The obvious core challenge for Adamantis was the creation of the master mold from which to cast the two enclosure halves in Diluvite nano metal. That mold can be CNC'd from a €6'000 block of solid; or 3D-printed from scratch. After discarding a few milled blocks for imperfections caused during CNC, Æquo discarded that process for being too inefficient and costly. Rather than outsource the second option to compete with other clients, jobs and schedules, Paul & Ivo meant to own their process. Coffin-sized to create monolithic molds also for bigger future cabs, their new 3D printer wasn't just physically large but also a larger investment. Casting from these molds would take place in a nearby foundry specialized in casting aluminium. When Paul and I telephoned, Ivo had just finished installing their new printer. It works off the very same 3D files he uses during the design process. It requires no fussy conversion to a CNC-based computer language.

Asking Paul whether they had ETA for first Adamantis samples just then—a growing list of pre-orders heated up the schedule—Paul though that if their mold printing netted an early success, September 2020 was the target. If the learning curve there or in the foundry threw spanners in the works, it could be later. Nobody had ever cast in this material before. Learn as you go was the motto. To illustrate just one tolerance challenge, "the areas where the clam shells torque together with eleven bolts must be perfectly flat or there will be air gaps." Whilst assembly of the finished powder-coated parts will be child's play compared to Stilla and Ensis production, arriving at perfected parts could become some lengthy chapters of this story. 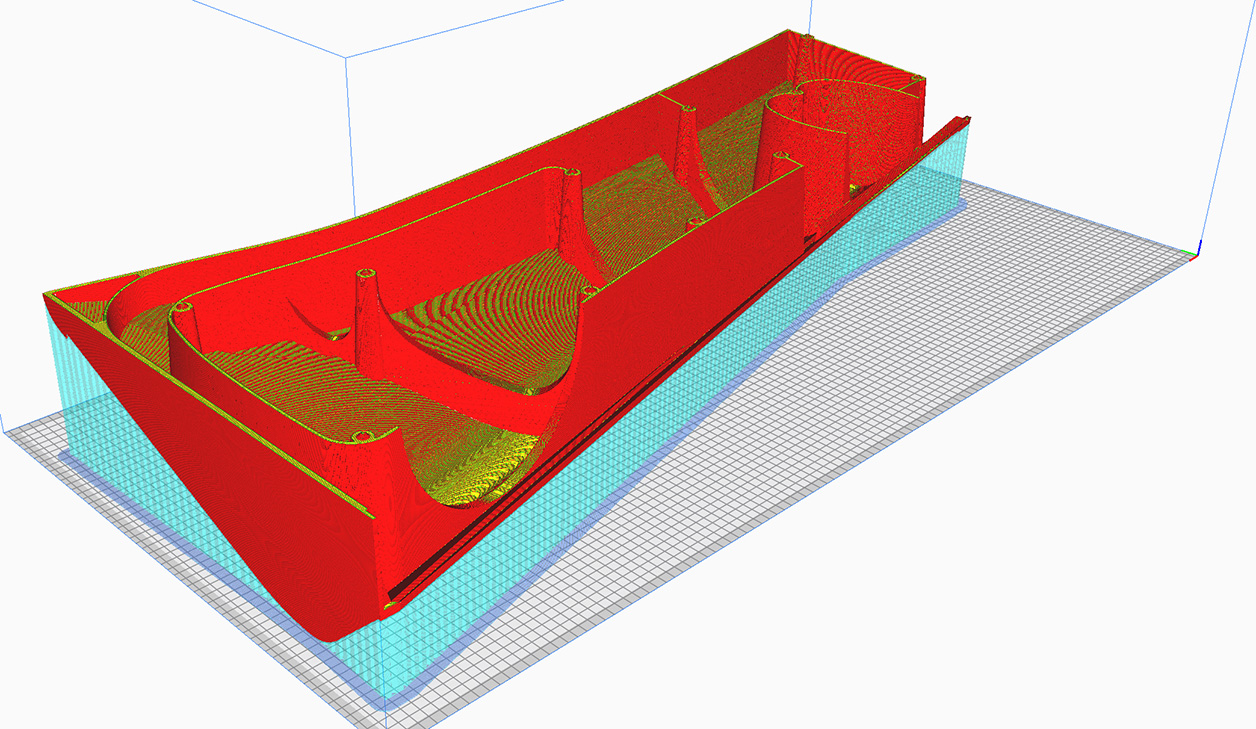 The light blue portion is the special support structure for the developing red 3D structure on the printer bed.

November 2nd, 2020. "Perfecting our mold and casting processes takes longer than anticipated so the Adamantis launch postponed to the first half of 2021. When pioneering at the forefront of technology and creating procedures never before attempted, all estimates are a challenge. There are a lot of factors at play. Each cycle from mold creation to actual cast takes several weeks and it takes many cycles to inch toward perfection. We expect to need several more. Time goes by fast and of course there's the influence the pandemic had/has on the time line. We have a pretty strong Elon Musk vibe going. The promise of a unique groundbreaking speaker makes everything worthwhile. The fact that we'll use these same production techniques for future models means a very solid investment into our own future. It takes a lot of time and effort to set up but once perfected, we can roll it out for new models to come. Scheduling too will be a lot easier then. For now it's asking the patience of our distributors and the large numbers of interested customers. A lot of people understand the amazingness of Adamantis and its incredible value proposition. Their payment now seems to be more in time and patience than it will be in actual coin. We hope that promise outshines the patience needed for it to arrive."

June 9th, 2021. Paul proposed a Zoom meeting with him and Ivo. "What a marathon we've run. We're real cast'n'mold experts now. Even making casts of ourselves will soon be a realistic option." Gallows humor is often great grease to keep grinding gears going. I was curious about their progress. With this project they'd bitten off a chubby chunk. If stiff ambition is a young man's game, how much had they aged since starting on their composite journey? Would I have new comrades in the league of premature greys?

Not quite. Both still looked young if a bit worn. Shedding light on their mold perfection path, I learnt that each cycle of revised mold and subsequent proof-of-concept cast took them about two months. Just six iterations already ate up a full year. To print his mold originals, Ivo had customized their printer nicknamed Goliath with his own print head, vat and more. The learning process also involved figuring out how to best premix their nano material in a rough tumbler, keep it active en route to the casting plant and during the actual pouring process; how to compensate for material shrinkage during cool-down; how to perfect a mold release; and far more on the casting end. Now both Ivo and Paul thought that quite possibly they faced the final cycle of the perfect mold. That would turn into an aluminium-alloy master from which they expected to cast 50-100 pairs before needing a new metal master. Compared to the 400-step Stilla assembly protocol which takes four people 10 weeks for 12 pairs, Adamantis would just bolt together, no highly specialized skills required. Ivo's cab design accounts for future partial/full activation with built-in amplification à la Ensis. A thick dual powder coat will give the exposed nanocast metal a matte black look whilst the inset dress panels can be different woods or lacquers. 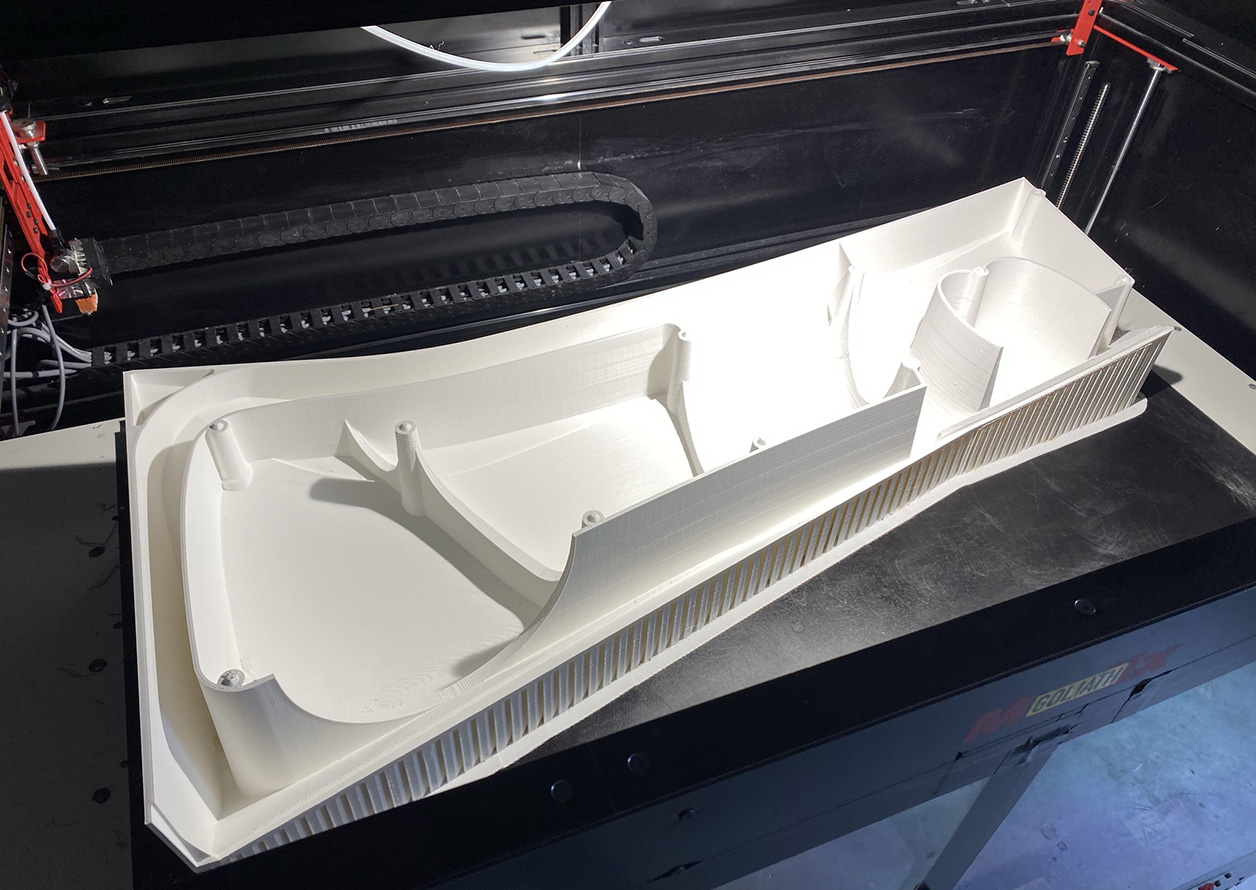 A finished print inside Goliath. We note the woofer's very long port which runs along the spine then curves to exit at the front's bottom.

Ivo mentioned his extensive data base of precision measurements he'd conducted in all of their Æquo Audio installations. He'd become very good at predicting in-room speaker behavior which now informs and quickens his design work. Once he had the first finalized Adamantis cabinets to work on, he didn't expect that filter tuning would take him very long. He was already very familiar with the drivers and had endless simulations on them. Paul brought up significant price increases they faced from their Nordic driver supplier. Like for other users, this would sooner than later have to impact their own retail pricing. Ivo talked of his first prototype nanocast 34mm tweeter membrane which is 50 x better damped than Beryllium. He still needed new measuring gear to see how it acts past 50kHz but could already see that it behaves more like a soft than hard dome. "There's some cone behavior but far milder than the steep breakup of typical hard materials." A big driver house already had expressed exclusive interest but Ivo was hesitant to sell off the family jewels just yet. Paul brought up their invention of a new super-shield material. It won't need to connect to ground to work. "By measurably lowering the noise floor, we gain a significant free resolution increase." That invention is expected to shortly launch a short line of ultra-performance cables from Æquo Audio called Arealis. Both men expressed hope to premiere Adamantis at the upcoming Dutch hifi show in October. Just then that was scheduled to run. The pandemic simply made all of it very unpredictable. Regardless, we now have a comprehensive picture of the road map Adamantis had already traveled by June 15th 2021 and what would still have to happen. Let's leave the final details for the review proper.