"The Adamantis drivers are custom tailored with our Danish specialists and production partners for absolute performance and best-in-class consistency. Low compression rubber surrounds and spiders, symmetrical motors and low self-induction on both in/out strokes show very high linear excursion reserves. Our unique 40mm fixed-silk-dome-plus-ring tweeter redistributes vertical/horizontal energy in the most optimal ways. Inherited directly from Ensis, this tweeter is far less resonant than beryllium counterparts or fast ceramic and diamond specimens from Accuton/Thiele and surrounded by a fully compressed wool mat. The 10" aluminium woofer too is very similar to that of Ensis but here almost doubles its maximum dynamic output with a port tuned to 20Hz which operates in the pressure domain and optimizes air flow efficiency by horn loading the front opening." 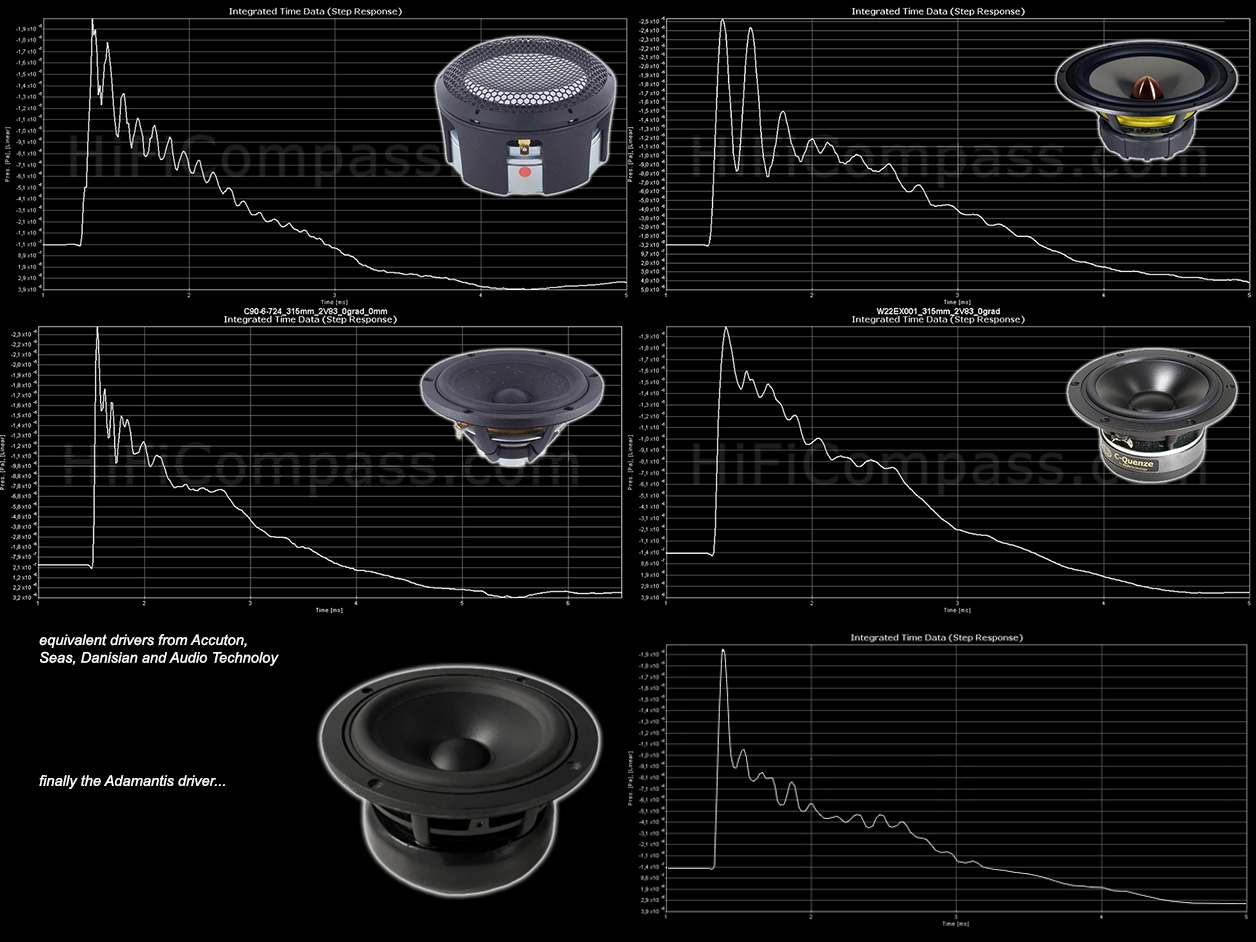 "Entirely new is the Adamantis 5" midrange. One of the distinct requirements was matching its now passive woofer's efficiency. To arrive at higher overall sensitivity, we would have had to raise woofer efficiency first by using a thinner lighter membrane or adding magnetic force to its motor. The first would increase cone-induced distortion and trade first-octave output for upper-bass efficiency. Adding magnetic force would have over-damped the motor system to again limit output. Our new purpose-matched midrange with ±3mm linear stroke thus has a paper-pulp not mineral-filled polypropylene membrane."

"The three Adamantis drivers sit behind a fixed extremely open hexagonal mesh—16% more transparent than the Accuton versions—which adds magnetic screening to all the drivers behind it. To ensure vibration-free operation, this shield is reinforced with solid 3mm rods along both sides of the front grill panel."

"The enclosure's top and side inlays are made from multiple layers of different high-damping polymers based on epoxy resin, ABS and acrylic/PMMA to constraint each material’s specific resonant behavior. These inlays come finished in various high-gloss lacquers such as white, black and red. Optional are metallic versions in white, ice blue, dark silver grey and beige gold. We will also offer some exclusive brushed metal and/or patina finishes as well as a large variety of beautiful real-wood veneers similar to the selection currently available for Ensis and Stilla."

Enclosure behavior of 6061 aluminium versus Nanocast-MMC™

The electrical filter in its sealed compartment uses "low-order slopes with super-wide bandwidth phase alignment made from high-quality Danish and German parts. Precision-value air coils made to order feature in a symmetrical layout with audiophile polypropylene caps and low-tolerance super resistors". The biwire terminals are WBT. Sensitivity is 88dB/4Ω, claimed -3dB in-room response a whopping 19Hz – 40kHz. Despite compact dimensions and thin walls, each speaker weighs a back-breaking 80kg or 176lbs and sits on three M8 spikes.

In short—or rather, quite lengthy—Æquo Audio's Adamantis is a true hi-tech speaker, from a company that's still far smaller and newer than one might expect for such a dive into the very deep end of innovation. 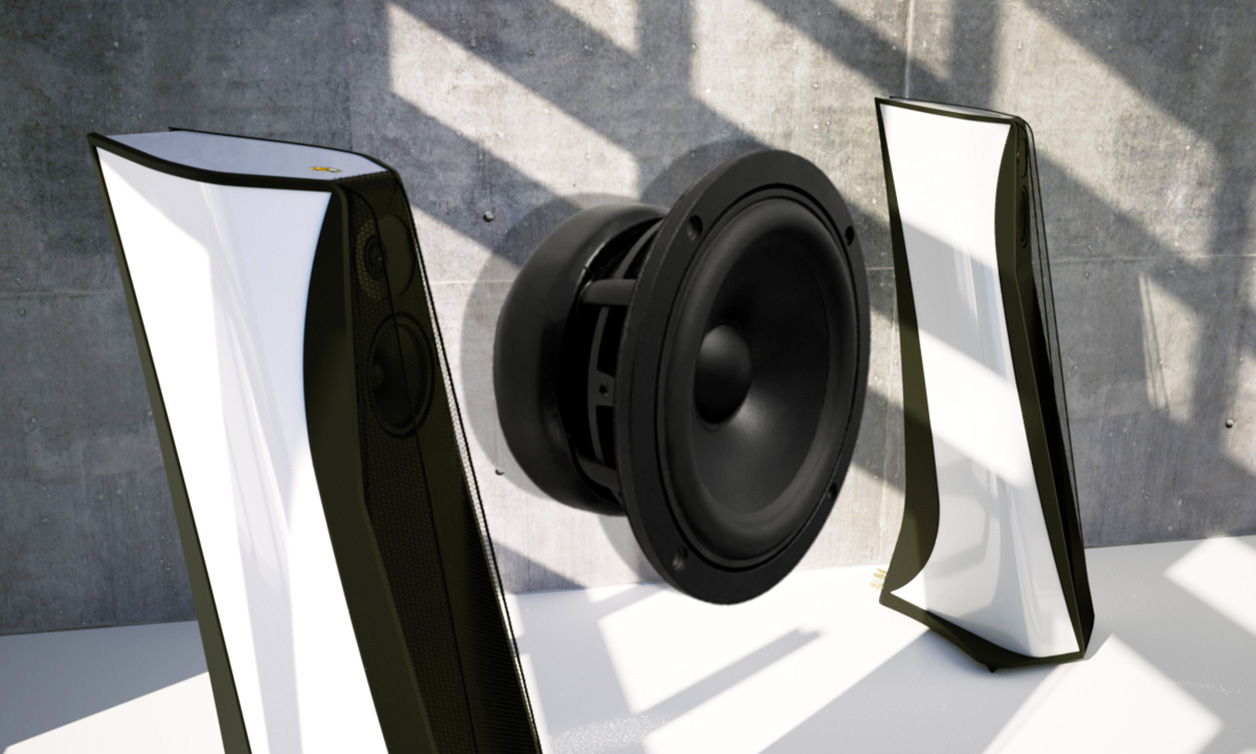 At the last Munich show, I'd asked Ivo about rib patterns since cast panels afford design freedom to treat their inner surfaces. Aerospace likes isogrids for their ratio of stiffness to strength to weight. For hifi apps mindful of minimizing resonances, grids of repeating equilateral triangles are most prone to resonance because their ribs make continuous straight lines. "Pentagons and heptagons are better against resonance but won't combine into standardized grids." What Ivo's resonance-optimized ribs look like remains a secret. Suffice to say, they combine multiple geometric forms which break up straight lines. If you were wondering what the insides of Adamantis look like to render the panels even stronger, to avoid smooth flat surfaces and to be acoustically least reactive, it's the æquogrid pattern.