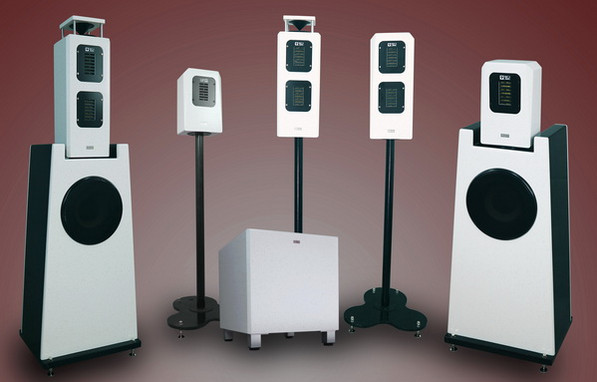 Ultrumax – It's not an ulterior motive taken to the limit. It's Mark & Daniel's AMT driver tech taken to an unprecedented new 200Hz-20'000kHz bandwidth. They've launched this range around their pleated new DM8a widebander. It includes single/dual-driver monitors (the twin version can come with the 7kHz+ omni super tweeter) which can work on a stand augmented by their cubic companion sub with downfiring rear-ported 10" woofer; or dock on the 8" subwoofer base shown. Aside from driving their woofer with a 150w class D amp, either sub can drive its satellites with a built-in separate 100wpc power stage. As always, the cabinetry is the firm's own very dense thus heavy synthetic marble.