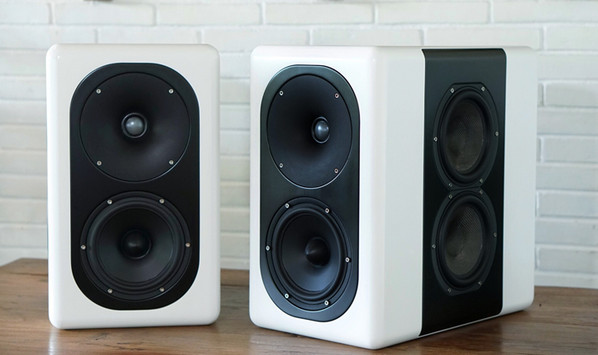 Redefine – Australia's Henry Kristanto of Redefy Audio Pty Ltd introduces his "most ambitious project ever, an active stand mount with 4 subwoofers. All drivers are custom-built by us for this particular model." The driver complement is a 29mm Beryllium tweeter in a 16cm wave guide for directivity control. The midrange is a 17cm curvi-cone carbon/paper Neodymium-powered affair whilst the same-sized woofers are long-stroke woven Carbon cones "especially developed for a smaller sealed enclosure". Onboard power splits into 3 channels for a total of 600 watts. There are RCA and XLR analog inputs and one digital input. There are also 3 presets for boundary and response compensation. When asked about his layout's similarity to the Kii Three, Henry replied, "yes, it's my take on something similar, albeit with what I believe are far superior drivers." A review is already planned once this model goes into full production. Whilst pricing for various markets will fluctuate as always, an estimated target is $7'500/pr US.