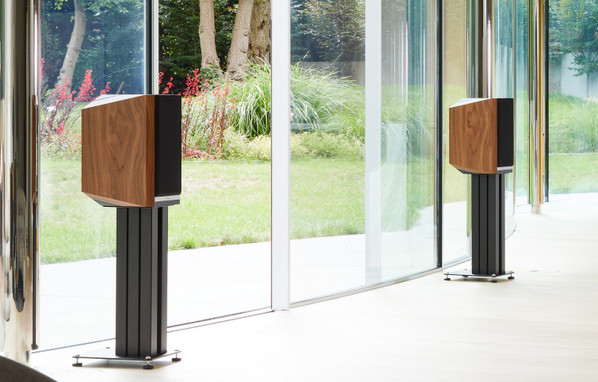 Minor kudos – Like the 707 and 606 floorstanders, the Kudos Titan 505 is a two-way design. Its twin mid-bass drivers feature high quality double-coated hard paper cones for superior stiffness and damping. In common with the three Titan floorstanders, the 505 sports an isobaric arrangement in which the second mid-bass driver is positioned internally back-to-back with the first. The result is significantly improved midrange clarity and bass response as well as a reduction of bass distortion. Kudos' trademark minimalist low-order crossover remains a key feature. The cabinet uses complex constrained-layer damping in the side panels and the reflex port into the base panel is an adaptation of the firm's fixed boundary design. All four models in the Titan series can be run either passively or actively. The crossovers are engineered to be optionally bypassed for active operation with select systems including the Linn Exakt and Devialet Expert. An optional stand allows six of the seven pillars to be filled with the listener's choice of material to damp resonance.The top plate of the stand incorporates constrained layer damping and the stand bolts directly to the base of the Titan 505.