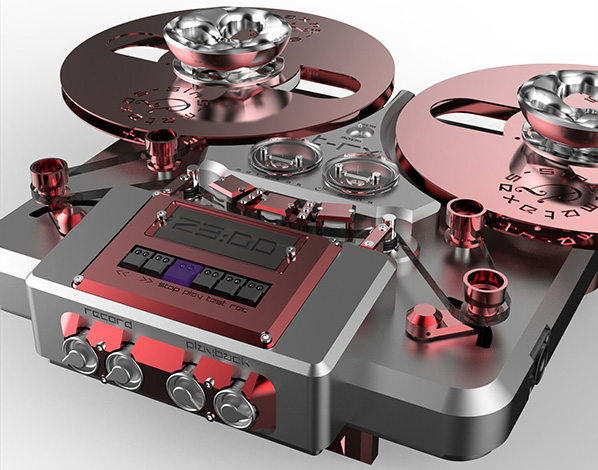 T-Rex cometh – That would be the Metaxas T-RX portable reel-to-reel deck. "After 35 years of serious recording work for Broadcast Television using Swiss portable and studio machines from Stellavox like the SM8 portables & TD9 Studio machines and over 40 years experience in the high-end industry, Kostas Metaxas has designed what he hopes will be the ultimate machine to capture unrivaled realism with analogue tape. Metaxas wanted to see how far the medium of tape could be pushed even though it is already considered as the absolute reference for current music recording and playback. His research into state-of-the-art machines from the 1960-80s showed that despite their high quality, they were still limited by technology of their time. When the tape machine producers all ceased operations in the late 1980s, the manufacturers of precision motors were still in their infancy. Today, motors are an order of magnitude more refined simply because of the improvement in manufacturing techniques, technology and computer-aided software controls. Metaxas combines the absolute cutting-edge in Swiss motors and technology from Maxon with the most inert chassis design to realize an order of magnitude improvement over past designs. First orders will be fulfilled in March 2019 and you'll be able to hear this for yourself at the world premiere during the Munich HighEnd Show in May 2019."