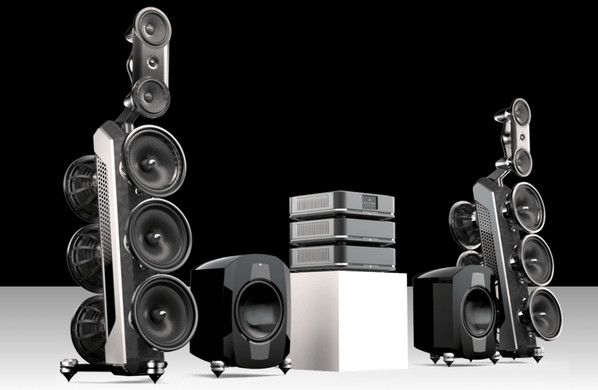 Not baffled at all – That's Kyron's new Gaia Evolution, the latest incarnation of the Australian 2011 open-baffle design. "New Gaia is a 5-way system with a pair of Mercury SE subwoofers. It includes 14 x 12" woofers that move enormous amounts of air, allowing the system to deliver realistic bass extension and resolution while providing ‘no-box’ clarity and speed for everything except subsonics. A newly designed tweeter waveguide developed in house for the patented Danish tweeter integrates into the dipole MTM midrange section. The main amplifiers are a collaborative effort with Hypex nCore for the final stage. Approximately half the gain comes from a Kyron-developed ultra-low distortion first stage interfacing directly with the nCore board. The subwoofer amplifiers are sourced from Denmark and capable of 2500W/ea. The new preamp features twice the processing power over previous Gaia for a patented algorithm that runs our linear-phase xovers, room correction and response/phase correction to ±0.1dB accuracy. Kyron work with individual customers to ensure a perfect fit for their preferred aesthetic. Finishing touches such as Nappa leathers, Alcantara, precious metals and bespoke paint finishes allow for a level of customization."