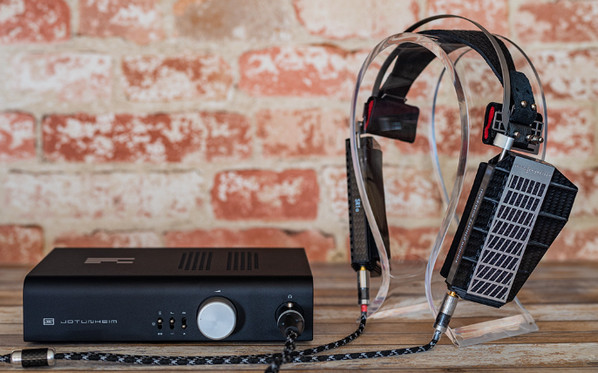 Schiit storm – As our review clarified, the Raal Requisite SR1a ribbon earspeakers require a 100wpc/8Ω speaker amplifier to dispatch the requisite current whilst an impedance interface box raises the near dead short of the ribbon's load impedance to a happy 6Ω. There'd been talk that Schiit were working on a direct-drive amp that would do away with Raal's impedance converter whilst building in the necessary baffle-step compensation into their circuit. Reader Russell Dawkins: "I talked to Requisite's Danny McKinney yesterday. Apparently the Schiit amp for the Raal SR1a ribbon ear monitors is coming in two versions: one with Schiit branding in their own case, the other in a case designed by Requisite with Requisite branding. The model name will be FOS for 'full of schiit' because the internals are identical. Pricing will be minus $300 for eliminating the Raal interface box and +$800 or $1'000 for the amp with and without USB inputs so $4'000 and $4200 for the two headphone/amp packages." Now Schiit have released the $799 Jotunheim R which dispatches 14 amperes into the SR1a's impedance, which has defeatable baffle-step correction should a circumaural Raal ribbon bow in the future which won't need it and which adds selectable passive RCA/XLR pre-outs. Analog inputs are on both RCA and XLR. The optional $200 True MultiBit card can add a USB DAC with Schiit's own DSP filter. That makes Jotunheim R the ideal compact driver for the SR1a which can be taken on the road or placed on a desktop driven USB direct from a computer.