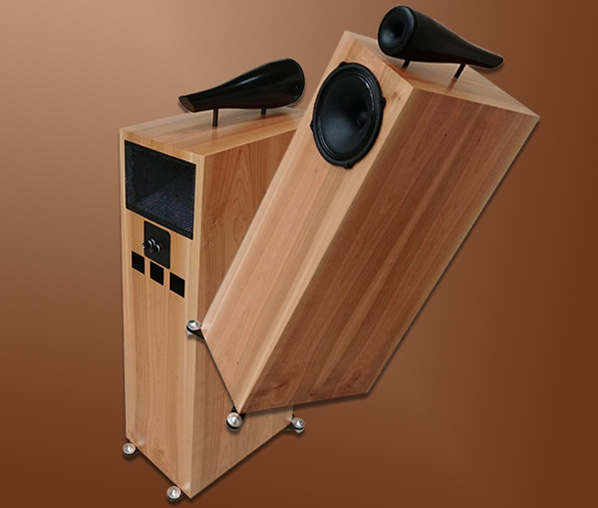 Aurai – Alain Pratali of Marseilles just consolidated his five speaker designs which were originally commissioned by Simon Audio for just their Korean market. The new brand Aurai Audio now prepares them for more global representation. The M Zero Junior shown is the current second from the top. It's a compact 115 x 30 x 47cm floorstanding 3-way of astonishing 95.5dB sensitivity. Top to bottom, it runs an ultra-light polyester tweeter of Alain's own design. That mounts in a Delrin horn which extends into a tapered line and sits in its own pod to secure proper time alignment behind the baffle. The custom 245mm Supravox midrange loads into a horizontal quarter-wave line to operate as a dipole open in the back. A custom 254mm Audax woofer hidden inside the enclosure operates in a sealed chamber which vents into a 4th-order symmetrical band pass chamber with three slot ports in the rear. Claimed bandwidth is 33Hz to 19kHz and finishes include real wood veneers and fine lacquers in either matte, satin or gloss. Crossover components are sourced from Rike and Miflex and the enclosure is built from thick Finnish birch plywood in miter joints. Alain's current website is an interim solution while the final one is being outsourced to a web designer. One finalized review and two current previews in our main pages document the product's performance and background.