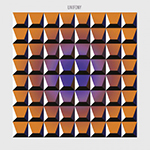 In these fast-paced times, most recordings are rushed. Studio time is costly and limited so artists spend as little time there as possible. That a group of musicians spend time together in a studio is even rarer. Instead of vis-à-vis interaction, most tracks are recorded at various places and times. All recorded material is later mixed and assembled. In that process there is the possibility to fix things. Loudness, timing, tuning and—if you are lucky phase—get matched to get one coherent result. Technically there is nothing wrong with this approach. It is efficient on all fronts. But something still has to give. In this case it is the musical emotion. You either play your part in your own little cocoon by yourself; or with another musician. The result is quite different especially when musicians have chemistry.

UNIFONY is a musical collaboration between two Dutch multi-disciplinarians. Minco Eggersman and Theodoor Borger are musicians, producers and composers while Theodoor adds being a sound engineer and studio owner. It was in that studio, fully equipped and with a cozy atmosphere, that this project came to life. They wanted to make music in a relaxed and creative way not based on compositions but layers of sound. And the influence of electronics on the recording chain should be zero, i.e. the musicians should not worry about settings and gear choice. For that no-worry condition, Grimm Audio stepped in as sponsor. With that settled, there was only left the addition of a third musician – Norwegian trumpeter Matthias Eick. Now you get why we were even more interested.

After the recording sessions were finished and roughly mixed, there was mutual satisfaction and appreciation. Still, a little thing nagged Minco. The recording was made in the old-fashioned 80s' way where one of Minco's favorite sound engineers is the now retired Phill Brown. So he contacted his hero to check their recording. Mr. Brown agreed and invited Minco and Theodoor to Miloco Studios in London where he added his own magic. Minco and Theodoor were on the 7th moon with the result. Then came mastering. With the endorsement of Phill Brown temporarily returned from retirement for this project, it was no wonder that Bob Ludwig was prepared to step in for the final process. When James Marsh designed the artwork, the project was done. UNIFONY is not only spiked with big names, it is also a very musical endeavor. Twelve tracks take the listener on an aural flight through beautiful soundscapes. Steady rhythms keep the voyager alert, keyboard accents and drones act as coloured waves and Matthias Eick's sometimes eerie trumpet meanders trough the illusory picture. This is not the next ambient project full of electronica. This is music from the heart; lyrical and emotional. M&H