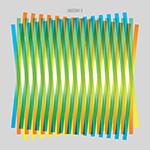 Unifony I, a collaboration between Dutch multi disciplinarians Minco Eggersma and Theodoor Borger, took the listener on a 12-track musical journey with Matthias Eick on trumpet. Unifony II goes further. For the second installment, Minco and Theodoor asked pianist Aaron Parks and saxophonist Oskar Gudjonsson to join who both agreed after hearing the first album. Aaron was touring Europe at the time to come straight to the studio after his last show. We've followed him since first hearing him in Seattle at age 16. We admire his improvisational talent and his compositions played either as sideman or with his own bands. After some initial explorations, the vibe in the Dutch studio came together for this new project. The right atmosphere soon led to inspired musical cooperation and Aaron improvised on the existing compositions of Minco and Theodoor. This netted the 12 tracks which made it to the final album; but not just yet. First Oskar Gudjonsson too improvised over what had been recorded. He did so from a studio in his native Iceland with his signature soft voice. Gudjonsson isn't a household name outside Iceland but some may know him from the jazz-fusion band Mezzoforte and a trio with Richard Andersson. With the final recordings mixed and added, the tracks were sent to Bob Ludwig for expert mastering. The result is now available for streaming, pressed to CD and high-quality vinyl.

Just like the first Unifony, consecutive tracks form a landscape which invites the listener to let go, ideally with dimmed lights and the volume low. Now multiple layers suffusing all cuts can be enjoyed fully and even make repeat loops interesting. The music doesn't bore but keeps fresh and enticing due to the very relaxed manner in which the album was recorded and produced – no studio time pressure, no schedule pressure, all the needed vintage and new equipment on hand. When playing Unifony I and II back to back, the listener is in for an almost therapeutic mind-cleansing session. That's an advantage for streaming media. When playing the vinyl version, one has to get up now and then to flip the LP. That could break the spell. In any delivery format however, this album is highly recommended and Grimm Audio who contributed hardware rate it very highly on their blog as well. M&H