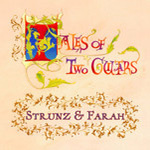 Tales of Two Guitars is the 2018 and 20th release of celebrated guitar duo Strunz & Farah as the originators of their oft-copied but never matched virtuoso jungle style. The fiery opener "Butterfly's Wing" kicks up plenty of dust with a typical lightning-y staccato duel between their twelve blistering strings. The following "Boleros #3" turns down the speed to go for a slinky vibe somewhere in the tropical Americas. And that theme continues serving up both spicy and sweet though on this release rather more of the former. There's plenty of exotic hand percussion to lay down a dense rhythm carpet. Charlie Bisharat's familiar violin shows up as does Jazzy traverse flute. Throughout, the Middle-Eastern influences of Ardeshir Farah's Iranian roots intermingle with the Cuban-esque flavours of Jorge Strunz's Costa Rican's heritage to create the duo's trademark milieu. Be it unaccompanied like on "Vals Tico" or against a heavy battery of percussion and bass, Strunz & Farah's guitars alway sound like more than four hands at work. That sheer technique can outshine a number's tunefulness like the nth installment of an action movie series which must top the predecessor's stunts is par for this course. These two artists are capable of amazing lyricism but on Tales mostly decided to cram the maximum number of notes into each bar. As such, not my favourite in their packed catalogue but still a showcase for polished guitar work.