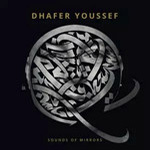 Sounds of Mirrors combines the singer/oudist Dhafer Youssef with Zakir Hussain on tablas, Hüsnü Senlendirici on clarinet and Eivin Aaeset on guitar. It catches up the Tunisian with an Indian music encounter he had as a 19-year old when studying classical music in Vienna. Ever since he'd dreamt of one day playing with one of India's maestros. Whilst touring France nine albums later, he invited Zakir on stage to sign up his first contributor for this latest album. The Turkish clarinetist whom he'd played with before came next to add the sinuous timbre of a wind instrument, thus creating a classic formation like Hüsnü's Taksim Trio or Anouar Brahem's trio on Astrakan Café which featured Barbaros Erköse on clarinet and Lassad Hosni on bendir and darbouka. But Sounds of Mirrors goes one more and ties it all together with the ethereal synth-type vibes of the Norwegian Jazz guitarist to create a work that "felt to me like an ode to friendship and fraternity" explains Dhafer. "When we were playing together, I could feel quite distinctly that we were as kindred spirits mirroring each other. Hence the name of the album, Sounds of Mirrors." Without obscuring Dhafer's unmistakable talent for lively odd-metered grooves, the majority of Mirrors is contemplative, dreamy and spacy. It showcases the wisdom of maturity which always manages to say more with less and less. By doing away with the piano of Dhafer's prior formations, Mirrors by necessity focuses on melody and rhythm over harmony. That naturally closes the circle with the milieu of Indian music which stylistically remains otherwise in the background though Eivin's standing chords mimic its drones. It's contemplative world music magic between Tunisia, Norway, Turkey and India to truly transcend cultural borders.