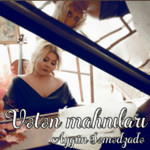 Today is about more recent discoveries that became permanent additions to my music library as bought/downloaded from Qobuz in up to 24/96 resolution. As such certain YouTube links to individual tracks already embedded in some of my more current reviews. Others will in short order to spread the luv around. Here goes in alphabetical order:

Aygün Semedzade: Vaten Mahnilari. On this album, Azerbaijani composer Aygün Semedzade represents her country with folk songs set in symphonic arrangements across a generous nineteen tracks fronted by different mostly male vocals like the always recognizable Eyyub Yaqubov who opens our musical visit. Unlike similar fare, this production ticks off sound quality, eschews heavy reliance on synths and includes more martial choral compositions like "Bismillah" which should play well for nationalistic patriotic audiences; or embed in epic soundtracks celebrating historic battlefield victories. But even light Baku-style disco features with "Gence" to nod at the capital's Pop culture; stylish lounge-lizard earworm fare like the winning "Baki Küleyi" with its glittering solo violin; and 'galloping' tunes like "Qeleba Cal" with its stylized bagpipes. The appeal of this album rests on its telltale vocals.

Jacob Gurevitsch: Yellow Spaceship. Danish guitarist Jacob Gurevitsch didn't attend the Brazilian/Flamenco wizarding schools of brute technique. Instead he entices with a real flair for melodies and fetching arrangements. It had Mallorca's exotic siren Buika join in on the aptly named "Melancolía". That track alone justifies purchase but there's a lot more smartly-styled easy listening which adds jazzy trumpet on "Song for Sol", accordion and violin whispers on "A walk to remember", male lead vocals on the bolero of "Breathe", a soloing upright on "La maison verte", more filigreed violins on "Finus". For setting a classy mood like starched table linens and lit candles, Yellow Spaceship has the golden tickets.

Jacques Loussier: Fresh Fruit. As it says on the tin, the undisputed French master of the 'Jazz Bach' formula was up to old tricks in his favored trio constellation. Enviably high musical IQ meets solid production values in swinging miniatures. Whilst this must be a compilation of older tunes since Loussier sadly passed on three years ago, I'd not come across some of these variations before. At just half an hour, this rearview selection makes a good entrance for Loussier virgins and reminds regulars who invented the genre.

Jasdeep Singh Degun: Anomaly. Where can the classical Indian sitar holistically venture to capture non-raga listeners who require Western harmonies before they feel at home? Anoushka Shankar's various crossovers point one way. Born and bred in the UK so not tutored by Ravi Shankar, Jasdeep Singh Degun explores another. His is no stylistic mashup like Indialucía's juxtaposition of Indian and Flamenco. It's a personal very poetic musical language, as unique as Andreas Vollenweider managed to shape for the electric harp. It requires no prior exposure to or love of Indian music. It's really a new thing altogether.

Lara Wong: Rosa de los Vientos. The oud/lute's Middle-Eastern origins always made for natural sightings in Flamenco's Moorish milieu. Piano would have seemed rather more of a stretch but a number of inspired artists have successfully carved out a place for it in modern Flamenco. We've even heard Hüsnü Senlendirici's Turkish clarinet on a Javier Limon album. Well before that, Jorge Pardo's saxophone established itself as a long-time staple. Even concert traverse flute flared up here and there. But Indian bansuri? That would seem to be Lara Wong's turn who on her maiden album has Melón Jiménez's guitar on her side. This is more of an insider tip but for the right listener a welcome surprise. The same goes for the next album of…

Nemanja Radulovic: Roots. The wild-haired Romanian wunderkind of the virtuoso violin and his ensemble take us on a truly global journey here, spanning freewheeling Balkan dances to Argentine tango, Irish fiddling to Russian primas exploits. They even throw in a Japanese lullaby, a stylized mambo, the Serbian "Sto te nema" classic, the Romani anthem "Djelem Djelem" and some Kreisler. When you speak this many musical languages, why not play ambassador for all of them with choice samples presented immaculately like a box of Geneva chocolates? It's Yo-Yo Ma on the violin; but even more adventurous.

Pressburger Klezmer Band: Baladen. I don't remember how I chanced upon this Slovakian band dedicated to the Yiddish repertoire of song and dance. I'm simply glad that my web-surfing fingers hit upon the right keys which led me to it. Echoes of sevda and Taraf de Haidouks mix with cabaret and Armenian memories. Being solidly anchored in vocals as the title Ballads predicted, this trip down Klezmer avenue sidesteps all brassy oompah as we might get with Amsterdam's Klezmorim. Ditto for high-speed instrumental spectacles à la Kol Simcha and its offshoot The World Quintet. This is old-timey vocal fare from a country most of us aren't familiar with. All the more reason to visit.

The Ayoub Sisters: Arabesque. Two sisters on violin and cello backed by a full string ensemble sponsored by an Egyptian benefactor offer up jubilant Arabian-flavored tunes in lusciously rich arrangements which even include the harmonies of the Swingles Singers. It's a banquet of musical sweet mint tea, pistacchio pastries and succulent Medjool dates. It's also well mastered to give lovers of massed strings an excuse to imbibe without cueing up Western classical staples or Middle-Eastern vocals.

And that's it for today's Sparkly Dozen. For the baker's extra, watch out for Dhafer Youssef's forthcoming Street of Minarets. One sample track is already playable on Qobuz. – Srajan Ebaen