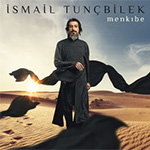 Ismail Tunçbilek is the third musketeer of the famous Taksim Trio which he co-founded with Hüsnü ?enlendirici on clarinet and Aytaç Do?an on qanun. Ismail plays various electrified long-necked Turkish lutes like the baglama and saz on which he is considered one of their most preeminent contemporary masters. Being a huge fan of the Taksim Trio's three albums to have sought out a concert in a small Swiss church on Lake Geneva and stood at its door for an hour to secure a front-row pew, I'd long searched for a solo album by their very gifted string player. Hüsnü has numerous solo album. So does  Aytac. Just listen to his glorious Deva celebration of the Turkish zither. Now Menk?be is that long-awaited solo album by Ismail Tunçbilek who was just 16 when he started working with the celebrated singer Ibrahim Tatlises. Meaning 'saga' or 'legend', Menk?be is a lush nearly saucy multi-layered symphonic studio production with soaring vocals and semi-programmatic filmic settings. Those are strongly suggestive of a Middle-Eastern movie soundtrack which on "Belo" even includes Indian/Flamenco flavours. Truly World Music, Menk?be is scaled very different from the Turkish chamber music of the Taksim Trio. Comparable in its culture-crossing scope and global appeal to Juan Carmona's inspired efforts with Alchemya and Perla de Oriente, Menk?be is thus sophisticated big rousing music from the country at the crossroads between West and East.