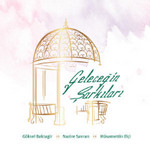 Gelecegin Sarkilari by qanun maestro Göksel Baktagir is stately chamber music which conjures up visions of a sultan's palace during the Ottoman empire. The sinuous vocals of Nazire Savran with the trademark undulating embellishments and heavy vibrato of this style transport us into a tangible milieu of strong black coffee with sediment, dried apricots, halva and time running very leisurely under a hot climate. Alternate male vocals by Hüsamettin Elçi set a properly dark counterpoint to Nazire's sky-bound registers. The perfumed tunes are down-tempo, saucily emotional and hypnotically cyclical to create a strong sense of time and place. This makes for a lovely displacement of the average Westerner's actual locale. And isn't that the power of music – to transport us to elsewhere, no travel preparations or tickets  on our part required except for a quiet open mind so our heart strings are free to be played upon?