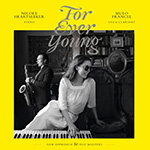 Treading the fine line between trite schmaltz and full-fat Unterhaltungsmusik is tightrope business. Do pianist Nicole Heartseeker and reed man Mulo Francel of Quadro Nuevo fame manage on Forever Young? It'll depend on mood and sensibilities. In typical GLM label fashion, sonics are high brow to make fine demo material. Packaged as a "relaxed conversation" and "fascinating dialogue" between tenor sax and piano, on downtempo Lieder-type fare by past masters, the result is no swingé Jazz-the-Classics Eugen Cicero, Jacques Loussier or Markus Schinkel. Neither do Jan Garbarek and David Orlovsky meet Hillliard Ensemble and Singer Pur in a mystic medieval melange. This is more debutante meets dashing suitor, the two serenading each other on spinet and recorder with "Für Elise" in a Jane Austin flick. It's higher on romantic promise than artistic depth. Yet play it après dinner to some fine conversation and it'll hit all the right notes. That's particularly so because Mulo Francel has very sophisticated control over his pianissimo. He treats the potentially raunchy wail of the tenor sax like an elegiac concert oboe. And Nicole Heartseeker plays it straight to never attempt anything virtuoso or syncopated. Forever young like an evergreen? The original compositions are; these duets not so much. But again, this concept walks a very thin line to avoid kitsch. Unterhaltungsmusik is music for entertainment. That ought to be true for all music but today it signifies 'lite'. Here it's tacked onto basic classical repertoire. Forever Young is what a Viennese coffee house might commission whose crowds fill some leisure time with Kaffee und Kuchen.