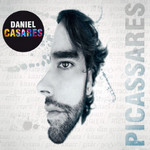 Picassares by Daniel Casares is the Flamenco guitarist's 6th solo album whose title, like El Cigala's Picasso En Mis Ojos, is a dedication to painter Pablo Picasso. On it the Spanish guitar traverses most its core terrain of the forms of malagueña, fandango, alegría, tangos, bulerías, rumba and, on "París", even a chanson with fadista Dulce Pontes who sings to the painter's death with lyrics by Antonio Martínez Ares. Like there, "Calle Avignon" sports a surprise violin whilst the bonus track "Prefiero Amar" is carried by the jubilant vocal chords of Miguel Poveda. "Caballo de Guernica" instead gives us the throatier hoarse pipes of Kiko Peña to suit Picasso's most famous painting protesting the Nazi's bombing practice on the Basque town of Guernica during the Spanish civil war. The painter's love of bullfighting's pageantry and gypsy music—he loved Manitas de Plata—is well known. After he'd moved from Barcelona to Paris, Picasso frequented the Au Lapin Agile bistro where he met composers Francis Poulenc and Edgar Varèse. He even designed the stage curtain and costumes for Serge Diaghilve's Ballets Russes. And of course during his Cubist era, he painted guitars. Picassares thus retraces Picasso's appreciation for traditional Spanish folklore with an incendiary Flamenco album full of musical machismo.