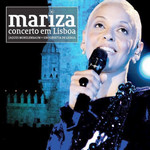 Mariza. Concerto em Lisboa. You had to be there. You had to be. Sometimes a song is more than just the words. To have a song that resonates with a nation's soul is special. Mariza. Sings Fado. Fado is described as the soul music of Portugal, full of references to the glory of the homeland, the beauty of Lisboa, with a lot of it poetry by the nation's brightest poets. They are deeply attached to both their land (terra) and, as a historically significant seafaring nation, the sea (o mar). Mariza sang Fado in her father's bar in the Alfama district of Lisbon. Then in 2001 out came her version of "O gente da minha terra" written by the original queen of Fado, Amalia Rodrigues. The lyrics are:

"O people of my land, it's only now that I perceive, this sadness that I carry, was from you received.
This ballad is both yours and mine, united by our destiny no matter how much is denied, by the strings of the guitar.
Whenever we hear a lament of a guitar playing, we are soon filled with a longing to weep.
It would be a kindness if I were able to soothe it, and by releasing the sorrow, make my song less melancholy."

So here we have a diva addressing her people but at the same time, including them. She is them. Terra is not just 'land' but basic 'earth' as well. Oh people of the earth? Appealing to the inherent melancholy of the Portuguese nature is the saudade of Portugal. Her version of the song was a world-wide success and Mariza spent several years touring the world. She's unsurprisingly popular despite not singing in English as she is a beautiful, tall dramatic presence on stage with a very emotional way of singing. (Rumour has it that an A+R man said 'she'll never make it unless she sings in English.' Decca turning down the Beatles springs to mind?) Then in 2006 she put on a huge concert in the open air in Lisbon – Concerto em Lisboa, available on DVD as well. The 'return' of the singer who represented the soul of the country? When she sang "O gente", the emotion was understandably tremendous. In tears she dramatically ended the concert to ecstatic applause from her audience. Oh people of my land, this sadness was from you received. Such drama and soul. – Christopher Skelton