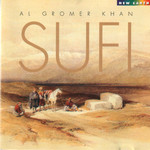 Al Gromer Khan, born Aloïs Gromer in Bavaria, is a composer of ambient music who adds his sitar to minimalist drum/synth atmospheres for a style he calls Paisley Music. Having formally studied sitar under Ustad Imrat Khan, he became the first outsider to be initiated into that musical lineage of Indian sitarists. With more than 50 albums under his belt, Al Gromer Khan is nothing but prolific. His very sparse contemplative style is on personal heavy rotation for setting a mood or climate whilst I work if don't want perfect silence. You can find his many albums on Spotify for free easy sampling. Should anything appeal to want to own it, Tidal will almost certainly have it. If you have a subscription, you could build an endless play list lasting more than a day without a single repeat. Where much electronica is robotic, industrial or noise, Khan's quiet style seems rooted in a personal meditation practice. It's more of an invite to go inward by setting then holding a space. It's quasi introspective. It's certainly not so-called New Age or Space music. Nor is it classical Indian for which many Westerners never acquire a real taste. It's its very own thing honed over many decades. To serve this particular niche, it's a personal favourite in what I call organic ambient.