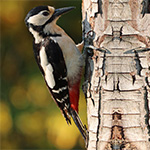 It's not an overdose of Viagra. It's when a woodpecker gets asked to drum out Ravel's Bolero. What a pain in the neck? Not if you're a woodpecker. Motorcycle helmets have been modelled around how the bird's skull protects its brain from such severe impacts. If you know how to deal with it, wood rage can be all the rage.

How about outrage? It could be an electrical outage that has our hifi down. It could be learning that our ultra-costly Swiss SACD/DVD player conceals a stock Oppo deck. Or it could be Shakespeare yammering on about mental suffering, taking up arms against a sea of trouble and the slings and arrows of outrageous fortune. Meanwhile blood rage is a genetic defect in vampires; if you're of the de Clairmont Clan and live in a Deborah Harkness novel.

In short, it all depends.

Today it's about timing. I thought about it while working on my fourth novel, er review for a French designer. The first speaker he sent was quite outrageous. The floorstander he followed up with had a manufacturing defect which led to a return which led to a redesign. That one rang my bells again; loudly. Getting there had simply been a bit convoluted. At a slightly lesser level commensurate with its lower price positioning, the third in Hermès orange again moved the belfry. Before I'd yet received the fourth, its narrative already had to keep track of driver changes, a model splitting into twain, name changes and much more. All along the maker's website looked like a 10-year old had done it up. Whilst meant as just a placeholder until a professional firm could replace it, it was no suitable destination for anyone who'd read my reviews then ended up there.

All my reviews really accomplished just then was confirm for the designer that he indeed had very solid products on his hands. He wasn't imagining it. If there were to be outrageous fortunes in their future instead of slings and arrows, they'd become a grand success. Alas, I felt like a woodpecker without a helmet telling him that unless his online presentation matched the product's performance, it was like taking up arms against a sea of trouble. He'd drown. He said that he understood. Instead of acting upon it though, he simply stayed focused on what he enjoys most: product design.

As a reviewer honestly enthused about a find, that can be… frustrating. But it's part of our gig. Our job is to create the most complete snap shot in time when we hosted a product. Freeze. Frame. What came before or what comes next isn't our purview. We just sow seeds. Watering them for a hopefully plentiful harvest is up to the makers. Some run with it, amplify it. Others can't even bother to link to it.

Occasionally a bit of Viagra might be a good thing? It needn't be any full-on rage. Just a bit of wood would do.

As we just heard, even a toothpick can work miracles…