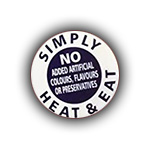 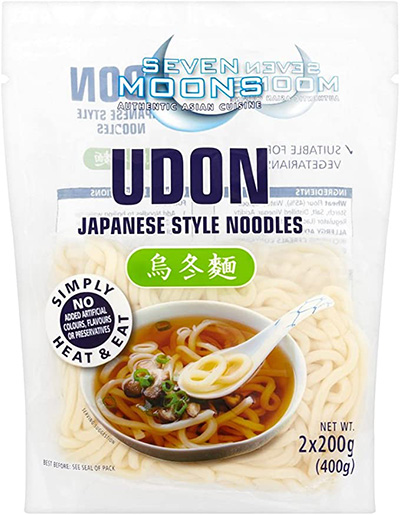 Looking at my watch from Vilnius/Lithuania, it was 10'33".

Usually we do our grocery raids at Supervalu because it's Irish owned. Support the local producers and economy.

But some stuff is only stocked by the UK's giant Tesco chain. Here we cherry-pick to fill holes in the kitchen. So I was looking for their miso with dashi flavor. "Will restock tomorrow" the sign promised. That's when I saw it one row up. Udon noodles. But not just any old udon noodles. These were from a company called… Seven Moons.

Damn. I'd just been upstaged by a (cough) cheap plastic bag.

"No added artificial colours, flavours or preservatives." Hey, at least they practice the same philosophy.

"2 x 200g." They don't skimp on portions either. Again like us. I could dig it. My heart beat resumed at its usual pace.

Good thing that Japanese cuisine is my absolute favorite. Being upstaged by it wasn't such a bad thing. And they had just one extra moon. My ego was only bruised pink not purple. Let's leave tomorrow for a royal flush of eight moons. Just don't make it toilet paper.

PS: And that's the kind of stuff you write about when you've got nothing better to do. Or say. Oy veh.