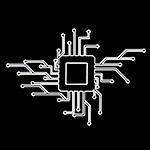 Sherlock and the case of Upsampling

When the DMAX Super Cubes hit my desktop, they flipped my wig so had to stay. Wig maintenance is a real pain. All that powder; and not of the Peruvian marching kind. Because the cubes' external amp only sports analog XLR inputs, out came the RCA-only COS H1, in went iFi's Pro iDSD Sig. Instant handshake. Bliss. Then my trusty Audiobyte Hydra X+ USB bridge bit the dust. Not having any spare equivalent on hand, the USB cable from my Win 10/64 workstation now connected directly to the iFi. With the majority of locally hosted files plain Redbook and my Qobuz Sublime hi-res streams topping out at 24/96, I completely forgot to download iFi's USB driver for Windows. Being limited to 96kHz didn't even register when I resampled all on-the-fly to DSD1'024 with iFi's Cassiopeia chip. 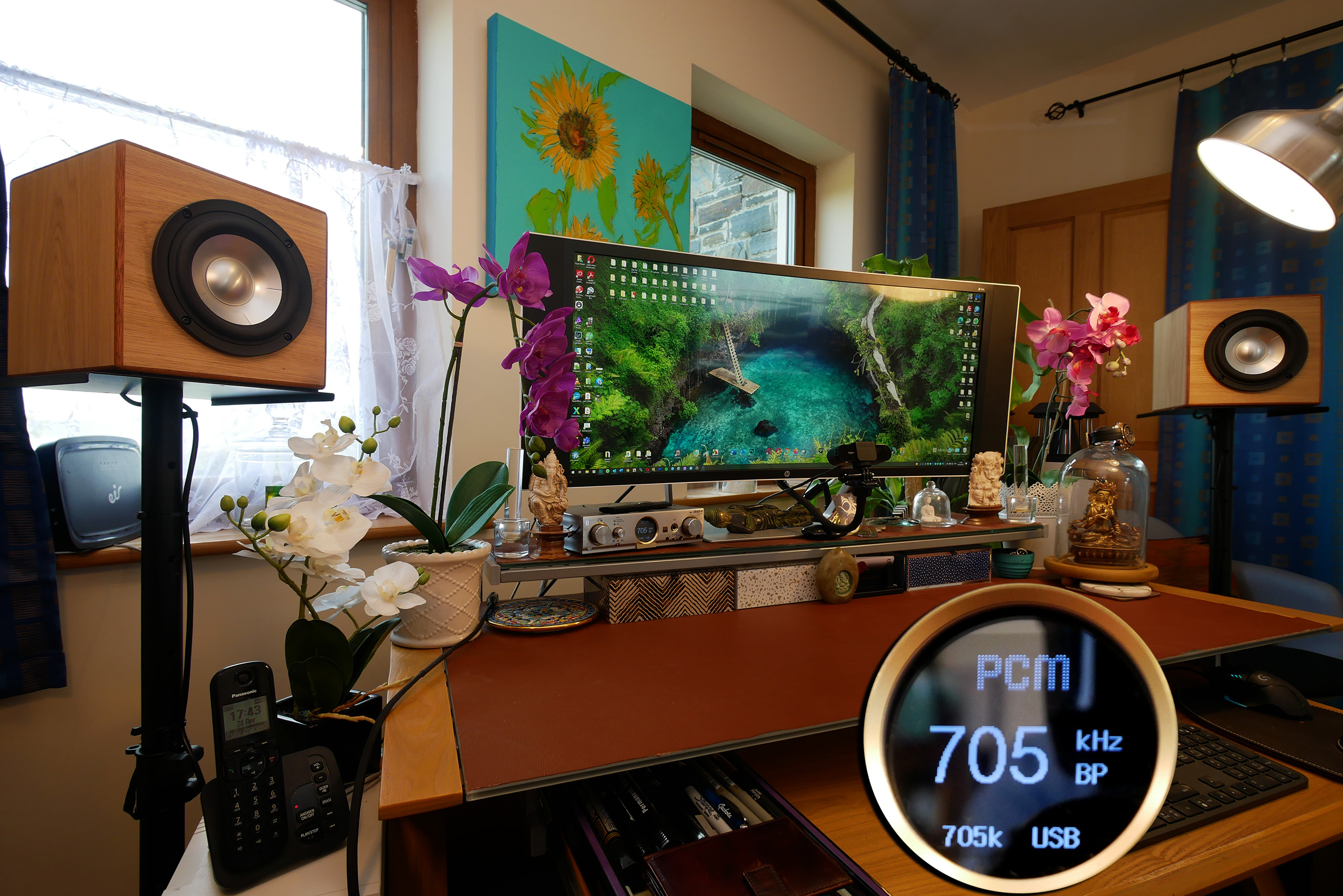 Eventually the devil of fussiness awoke from his snooze and whispered sweet somethings into my left ear. Okay. Okay! I downloaded and installed the bloody driver. Appease the horned one. Of course one thing led to another—this being PC13, no sex—and just for giggles and the other thing, I set Audirvana Origin's upsampler to full blast. Hello 705.6/768kHz. Wouldn't sending that down the short USB pipe increase jitter horribly? In any event, the iFi defaulted to PCM playback since it couldn't resample that high rate to DSD. Its filter options shrunk down to just BP not for driving on British Petroleum but bit perfect. Alas… the sound had gotten even clearer and spatially more expansive. 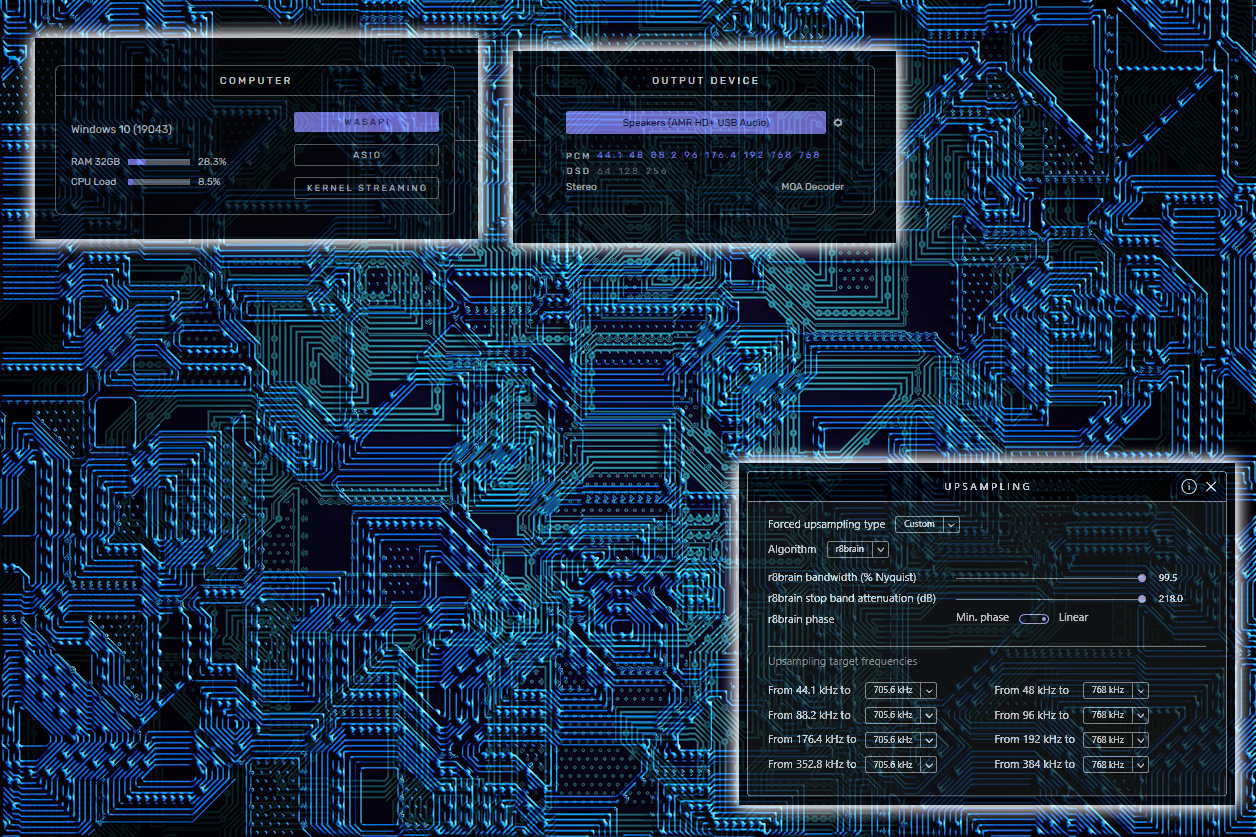 Lifting my wig for some unseemly scalp scratching followed; itself duly followed by a few back 'n' forthies. I hadn't imagined it. Full-blast upsampling beat 88.2/96kHz. The numbers brigade took one for the team. The most likely explanation which my cynical nogging could fabricate in its defense? My PC's computational powers running Audirvana's 64-bit upsampler submitted iFi's fancy FPGA in a rear-naked choke. More horsepower and all that. Truth told, I couldn't care less about the why and how. This was a perfectly free adjustment easily defeated. I'm only writing it up because I'd not expected anything. If anything, I'd expected that keeping the wired digital transmission to low native sample rates would be better. Leave upsampling for the DAC to do. Instead now my DAC just takes what it's fed and turns it to analog without any resampling. Less fuss, more muss? Did I just explode jitter like from (cough) one zillionth of a second to 30 or, Heavens forbid, 300 picoseconds? Yet I prefer the result and am perfectly content to take the sound at ear value. On my desktop, that value just increased. Happy days. If you're similarly tired of preconceived notions, perhaps give it a try? If you don't like it, it defeats again lickety spit… I mean split. 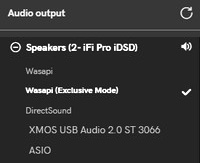 PS. In my bigger systems, I usually can't tell anything significant with selectable digital filters. On the desktop's nearfield perched on floor stands height adjusted and toed in for perfect alignment with my ears, these digitally phase/time and response-corrected control monitors generate the highest speaker resolution in our digs. Now things that elsewhere matter not—or only theoretically—become audible so meaningful. This includes differentiating between Wasapi, Wasapi Exclusive Mode and DirectSound in Qobuz Sublime's 'audio output' window. Being soft- not hardware based, your fingers do the instant walking, no buy'n'sell delays or money drains involved. Something for nothing if you like. If you hear no difference, your speaker/room interface compresses the necessary resolution to dig this deep. That's where the desktop's proximity and relative simplicity can really go places. Likewise for upscale headfi. Given my new fast-as-you-please Autobahn USB, I'll be looking into a proper 5GBps cable next to see whether that and its superior connectors make a related difference. iFi's Mercury 3.0 USB to the test…