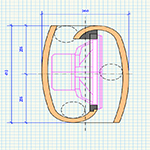 12 for inches, D for dual. Voilà, the next chapter in Martin Gateley's exploration of music's Mariana Trench. The real one measures 11'034m. That's nearly 7 miles deep. Audible bass merely hits 20Hz. Anything below turns mostly into felt pressure away from distinct tonal pitch. To counter Switzerland's high labor rates, Martin recently began to outsource cabinet production of this latest passive subwoofer outside the country. Rather than the stacked Ply build of the bigger D15 [above middle], the smaller unit uses solid wood, either oak, cherry or walnut. It's still a so-called Ripol after inventor Alex Ridthaler. That makes it a folded open baffle. At close proximity, two woofers fire face to face then exit through a frontal slot. Their counter-phase rear emissions escape out the back through two slots. This geometry enforces not just a dipole's customary lateral cancellations. It even reduces output through the rear slots relative to higher loudness from the front slot. It sets up directional or cardioid bass which doesn't trigger boundary gain and room modes like typical box bass does with omni radiation for far more time-delayed reflections. The Ripol principle even lowers its drivers' self resonance for more useful LF reach from a compact frame.

"I already tried three different 12" woofers from Audio Technology, Pioneer and Peerless and settled on the latter. Not only on size but perceived speed, the D12 could be the better fit with my Vox 3 monitor. I'm also experimenting with a single-driver dipole sub to drive build costs down even further. We'll see how that goes." This followed up an earlier email from last year. "I hoped to send you a pair of 12" subs before year's end but my Swiss woodshop won't be able to produce them on time due to a family issue. Visually they're closer to the Vox monitor to come in matching wood finishes. The redesign was due to trying to drive manufacturing costs so retail down as far as possible. I decided to work with a woodshop outside CH to make box production more competitive. At 42x38x38cm they're also a little more manageable. The front spacing of the drivers is proportional to your 15" but I have left extra space behind each to accommodate different drivers. Audio Technology woofers are €500/ea. I'm experimenting with alternatives which could bring cost down by half. The cabs will be solid wood since by the time you add labor for finishing visible edges—radiused edges on cutouts can only be done in solid strips—the cost of solid wood is more competitive than veneer. However, there's a marked difference for walnut compared to cherry, oak and ash. Walnut is 1/3rd more."

Customers often don't appreciate just how much thought and research goes on behind the scenes to keep product pricing down. If you've looked for a rare commercial Ripol sub, put sound|kaos on your list.