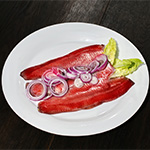 The term dates back to 1807 when British polemicist William Cobbett told a tale of having used a strong-smelling smoked fish to divert and distract hounds from chasing a rabbit. It's since come to mean a distraction. Red herrings often show up in crime novels. They play misleading evidence for wrongly placed suspicions to set up the final reveal's surprise in a grand game of ongoing misdirection. There's also the McGuffin, "an object, device or event necessary for plot and character motivation but insignificant, unimportant or irrelevant in itself".

In The Great Hifi Story—author unknown, now out of print—red herrings and McGuffins abounded. They ranged from slew rate to total harmonic distortion to flat frequency response, from class A bias to 1st-order filters, R2R DACs to high-mass turntables, Teflon dielectrics to oil-filled capacitors. With each plot gimmick, the reader was led to believe that they'd finally met the true cause or culprit for a certain effect. In vampire lore it's the silver bullet which finally kills the supernatural creature. In a return to Cobbett, others swear by garlic. Perhaps a stinky herring might do, red or otherwise?

What am I on about?

The belief in a singular element which overrides all others to determine an outcome. If vanishingly low THD were the silver bullet, most valve-amp fanciers would be immune. They enjoy magnitudes more distortion. 0.0001% leaves them entirely unmoved. It doesn't even register. The same goes for any other spec, part or tech. While it can be fun to associate with certain parts a certain aroma or tell—cue Sam Tellig's Mosfet mist—there's always opposing evidence. For any system that's been assembled around a certain belief to then act as proof for the owner's underlying selection criteria, there exist countless others which arrive us at equally or more satisfying results yet do so by contrary means. If there were only one correct, compelling or successful way to hit the great sound mark, we'd not see the vast variety of solutions which enjoy followers and buyers alike.

Whilst it would be lovely if there existed a how-to book of rules which guaranteed great sound like only combining direct-heated single-ended triodes with vinyl and high-efficiency horns, that notion would be naught but a McGuffin burger stuffed with red herring. Fancy ketchup with that? No matter what you put into your burger, it'll never serve as any guarantee, much less be the exclusive, one and only true path. The ways are many as are the contributing factors. The longer one plays this hobby to build up a bulk of actual experiences, the more one realizes just how many the ways are, how any seemingly proven rule can be flaunted and broken, how even majority consensus about lesser solutions will have exceptions where someone clever or just lucky enough managed to far transcend their presumed limitations.

In short, looking for the silver bullet is a fool's errand. It's a red herring, not yum kipper. Bon appetite? I think not.