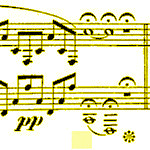 Today it's not the musical notation asking us to play very softly. Today it stands for something rather more effluvious: poop pumping. Really.

In 42 years of renting flats later homes in many different countries, I never had to do it. In fact, I never gave it a thought. But when two areas in our current rural house which is not on any public sewage system started emanating the occasional bad odor that wasn't regular bullshit on a Westerly wind; and knowing how previous tenants had been special as the neighbors put it… I called a waste-collection truck to empty our septic tank buried in the backyard. After less than a year of tenancy, it was full to capacity to make backflow the next very bad event. The traveling odors had been the first warning.

I didn't know what to expect of the job. Since Pawel our driver/operator was a very nice chap indeed—working on a Saturday, he was Polish of course not Irish—I watched him work while he explained the basics. And most basic they were. His massive and gleaming fire-engine-red Volvo truck included a very powerful vacuum; a 150psi water jet; a water tank; a collection tank; and plenty of hose, extension fittings and nozzles. All the job entailed was removing the lid to our tank, breaking up the hard top layer, inserting a large-diameter suction hose, triggering the truck's reverse pump via remote panel hung off his neck. Et voilà, sucking action until he scraped the literal bottom of our two-cube barrel. The second part of the job inserted a very long jet line into the plumbing between house and septic tank to clear any debris. As he put it pointing out all the hardened grease, that tank hadn't been properly cleaned in a long time. The previous tenants of 5 years possibly never had. For a final all clear, we had Ivette flush an empty toilet whilst we looked on. Voilà, perfectly clean water rushing at good speed into the empty tank. Done. With our occupancy of just two, Pawel thinks we'll be good for the next three years before we should call them again.

Now I know what emptying a septic tank entails.

Having lived in Ireland for already 16 years, Pawel used to work as a cook in a beachfront restaurant. When the pandemic cost him that job, he returned to Poland to get his operator's license for a waste collection truck. Would he go back to a commercial kitchen if he could? Never. Those hours were terrible, the pay lousy. Now he gets paid very well, has a company car and his working days end normal so at 17-18:00. We joked about the US and Italian mafias said to be heavily into the trash and septic collection biz. There's good money to be made with refuse and shit. "My boss is very wealthy" he chuckled. The state of his truck certainly bore witness. Despite the odorous nature of the business, this was a high-class operation. Whether Ireland has its own mafia I wouldn't know. But if nobody else wants the gig, what to do?

Playing our hifi more pianissimo than fortissimo is good for our hearing. It also makes for happy neighbors. Timely pumping of poop is good for our dwelling's long-term health, our nose and that of the neighbors. What other tenuous connection there might be I don't know. Best flush it then. Over and out.

Postscript. Ever wondered where a restaurant's grease ends up whenever its traps are emptied? With this type licensed company. Grease collection in fact is another service our local guys offer. Where it all ends up in the end even Pawel doesn't know. When full, he drives their red truck to an industrial plant in Limerick where its contents are pumped into an enormous storage vat. What happens to that when it's full? It's an unpleasant thought. And where does discarded hifi go to heaven? In a special cemetery under a headstone with our name on it all on a nicely manicured lawn? Some ghastly landfill next to the rusty refrigerators and washing machines is far more likely. I remember the one in Taos, New Mexico. It was an ugly open pit in the middle of the high desert; a festering gash in the earth. Refuse. It might be good business to collect but unless it incinerates in the end without toxic fumes, turns into compost or farming manure… where does it end up? Unless melted down for recycling, it can't really disappear. Out of sight and mind loses the plot. It's something to ponder on a rainy day. I was told that much collected Irish household trash gets compacted then ships to either Norway or Denmark where it is incinerated at extreme temps in a hi-tech plant designed for that purpose. Imagine shipping trash abroad on huge container ships. That's massive distortion on the carbon-neutral score; at fff or triple fortissimo.

But it's clearly Big Business. Nothing pianissimo about that.