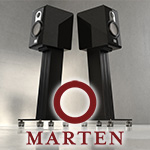 Mårten Design. Like their Danish colleagues at Børresen Acoustics, our Swedish team sport in their name a letter which for Brits and Americans isn't on the keyboard. Like the Danes, it's become a stylized part of their logo. Another mark of distinction goes to a long-standing collaboration with German driver supplier Thiele & Partners aka Accuton. Like Tidal in Germany and Albedo in Italy, Mårten champion their ceramic and diamond transducers over all others. So it's no surprise that in their newly introduced middle range replacing the prior Heritage models, the three-deep Parker series goes all ceramic again, even offers an upgrade path to a diamond tweeter. 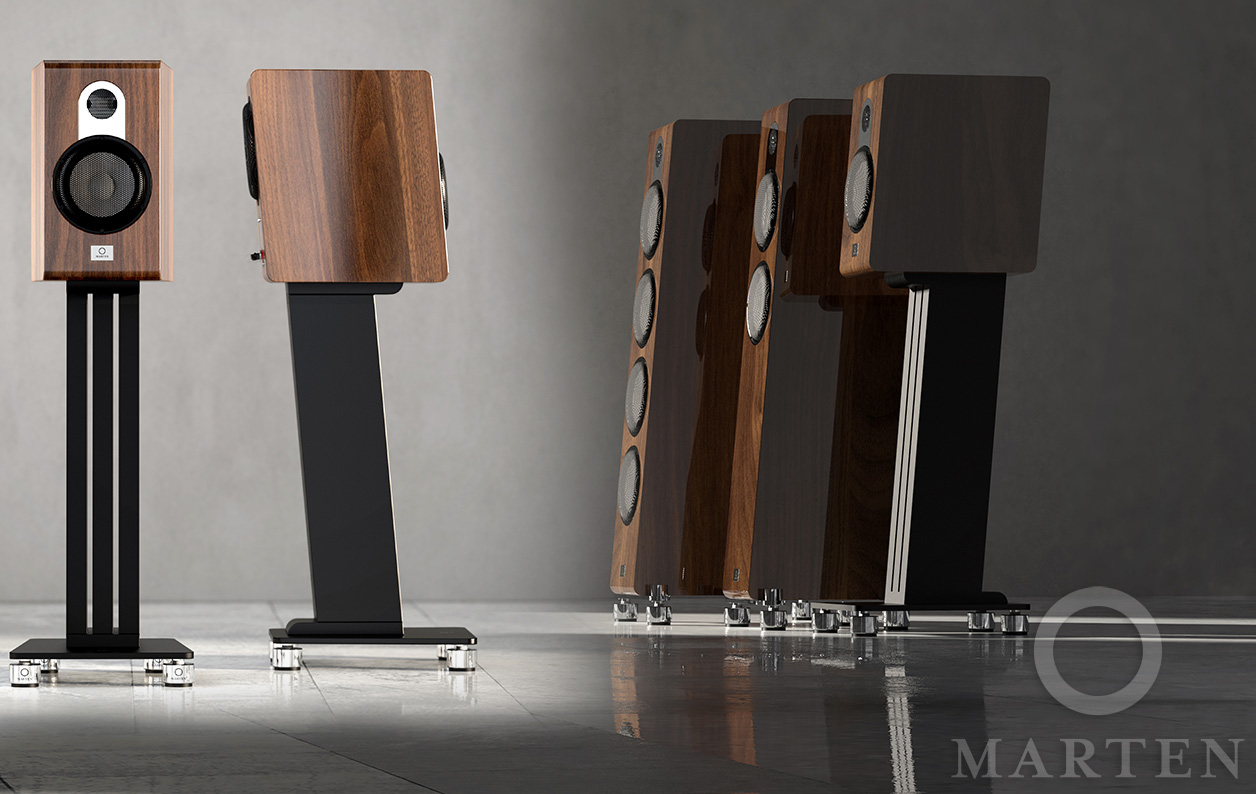 But there it doesn't stop. Where the equivalent Heritage Duke 2 monitor was ported [insert below], the Parker Duo successor grew a 9" aluminium passive radiator in the back. The 2.5-way Parker Trio adds another 7.5" midrange on its front and a second radiator on the rear. The 2.5-way Parker Quintet adds two more of each beyond the Trio. The nomenclature thus reflects only the front-firing artillery. 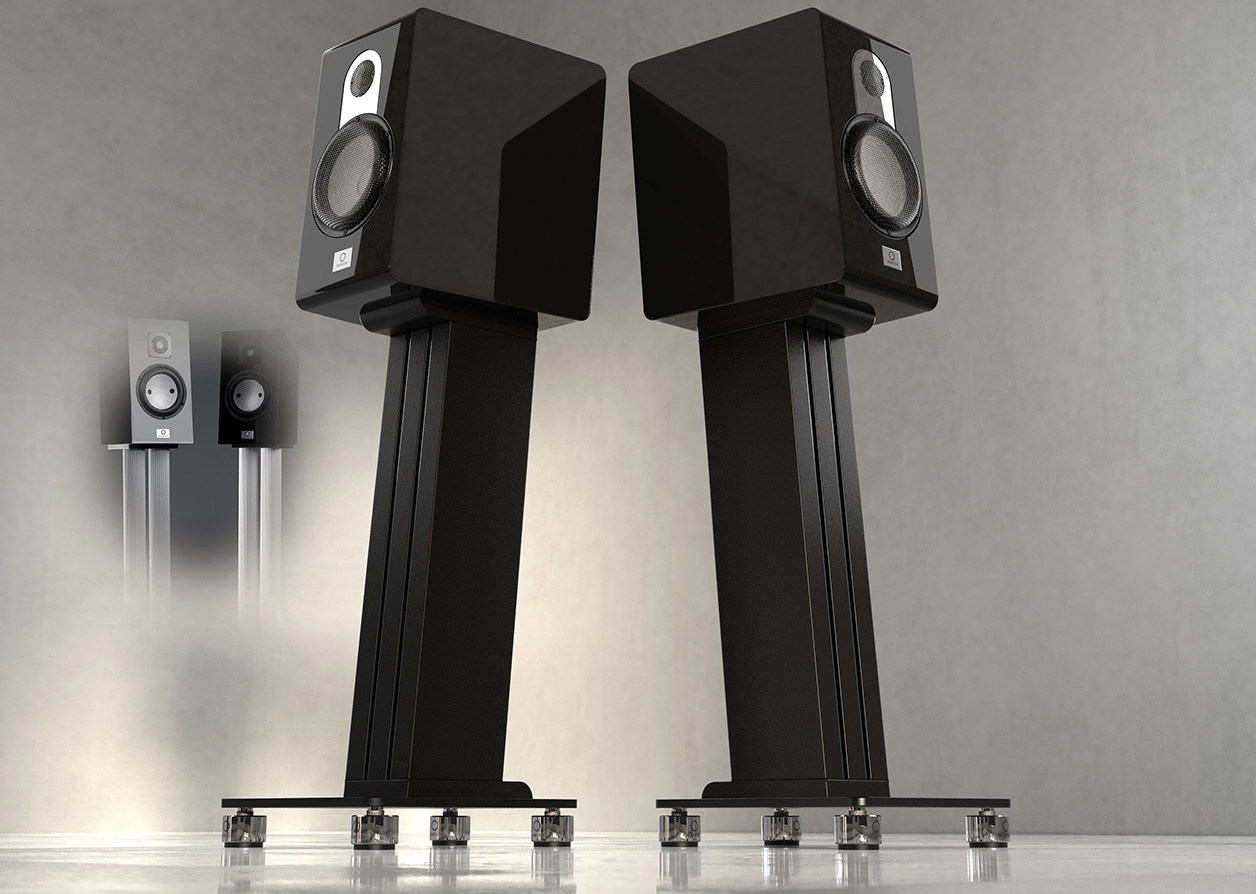 Be it Fram, Sehring, Kaiser, Tidal/Vimberg or now Mårten, passive radiators are making quite the illustrious comeback by appearing of late in very ambitious speakers, no longer just midfield models from Amphion to Burchardt to LSA. In a passive radiator, the moving mass of a driver sans motor or electrical connection—the weight of its diaphragm, surround and spider—replaces the air volume inside a port tube. That works on a similar principle. Yet it avoids the air turbulence colloquially known as port chuff or pumping and the time-domain errors of vent tubes. After all, the other term for a bass reflex port is Helmholtz resonator. It rings by design.

Due to its tuning, the passive 9" membrane of the Duo adds itself in just the bass to the active 7.5" diaphragm of the mid/woofer. Now both combine into the surface area of an 11.7" woofer. That explains the speaker's claimed 36Hz bass reach at -2dB yet fits into a box just 22-28x42x36cm WxHxD. The varying width reflects a narrower face and broader back, hence flared side walls. The front and rear baffle rake back too so this isn't your usual squared-off box. There's internal Jorma Design wiring and a 2'200Hz filter hinge. There's a net weight of 18kg and an optional matte black stand with polished Mårten-branded IsoAcoustics decouplers. Those mirror renewed attention speaker houses like Magico and Wilson have leveled at their own vibration-attenuation footers. Finally there are gloss/matte walnut plus piano black finish options now over 35mm thick proprietary M-board laminate, no longer the 23mm MDF of the Duke 2.

The ceramic edition gets polypropylene capacitors and copper-foil inductors. Besides its ultra-hard tweeter which pushes first break-up to beyond 70'000Hz, the diamond edition also upgrades to copper-foil capacitors and even swankier Jorma Statement hookup wiring and terminals. And, these Accuton drivers reflect Mårten Design's own specs, thus are customized to their well-informed needs after having working with Accuton since the beginning. 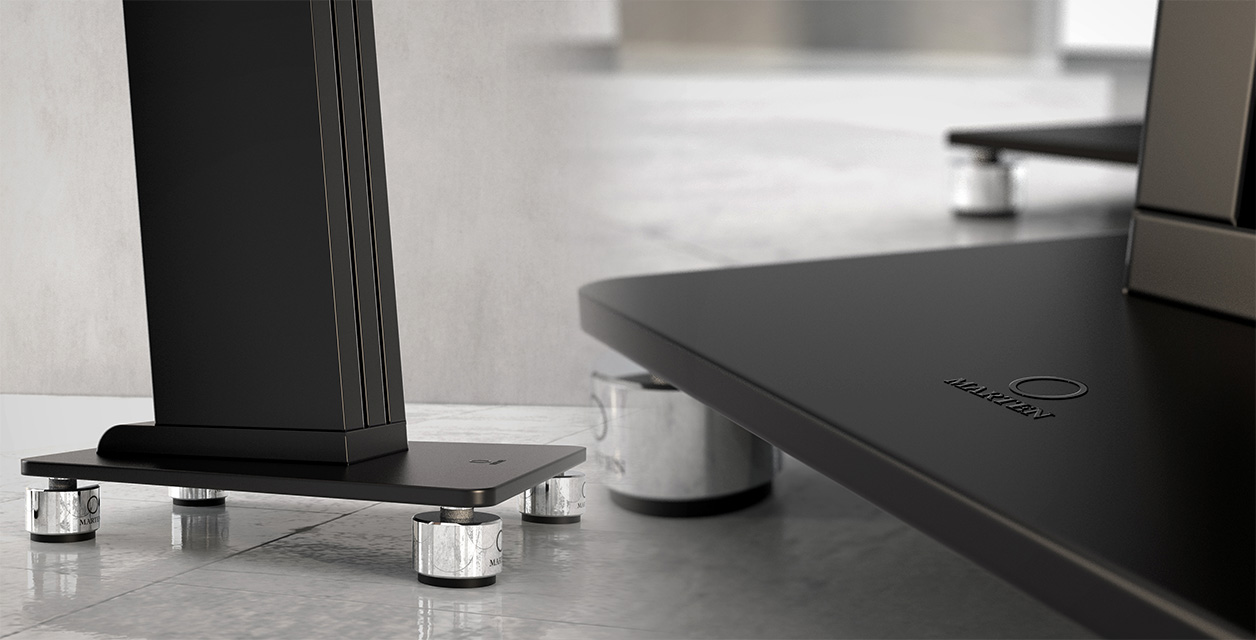 In short, the new Mårten Design Parker Two adds itself to a short list of flagship stand mounts that should flag the interest of those whose room is best served by nothing bigger yet who still want top-shelf drivers, inert cabinets, advanced crossovers and perfectionist build and cosmetics. 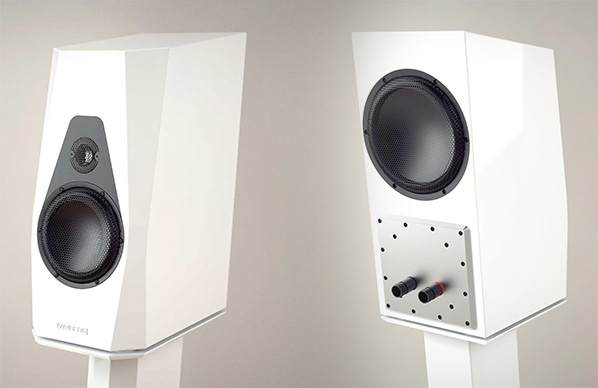 Competitors? Of course there's competition in today's upscale monitor sector, from Focal to Magico to sonus Faber and many steps in-between. On matching concept however, I'm aware of only one: Vimberg's ~€13'000/pr Amea from Germany. Like Parker Duo, it uses all Accuton drivers, a rear-aiming aluminium passive radiator and offers a diamond tweeter upgrade. Its mid/woofer is 6.8" across, its radiator 8.6", its weight 20kg down the scale.

If you want this particular layout and driver tech, Amea and Parker Duo would seem to be the most closely matched candidates, albeit at still disparate pricing. The Swedes get a few thousand less. 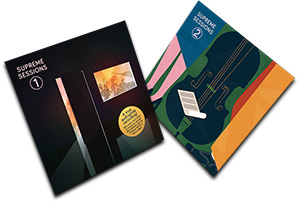 Unlike the aluminium championed by Magico, Stenheim and YG Acoustics—even Vimberg with Amea's driver plate and bracing—Wilson Audio built their name upon various methacrylate polymers. Mårten's building block solution for the Parker range can't be the carbon-fiber laminate of their statement range but is their constrained-layer M board laminate. As ultra high-speed cameras show, conventional MDF is prone to micro deformation when its drivers 'attack' it with bigger excursions.

It's why most all upscale speaker housings pursue harder stiffer or at least thicker materials which resist flex to create an inert wave-launch pad for expensive drivers. In a passive speakers, the 'brain' is the frequency-divider network which inserts between your amplifier and its drivers. Mårten refer to their filters for the Parker range as multi diverse. To learn its meaning and more about the M board, I'd have to talk to them.

To learn about the company, their 'about' page describes a three-brother family business run jointly by Leif, Jörgen and Lars Olofsson whose grandfather built advanced violins modeled on Stradivarius two generations ago. To pursue realistic sonics systemically, Mårten Design built their own recording studio in 2014. Since then they've worked with the best reference possible – knowing exactly what's on your recordings because they were mastered and are then played back on your very own speakers. A proper sound room is part of the same equation and the next video shows what the Olofsson brothers have to work with.

Finally, part of the Parker genesis story is having been planned as a simpler refresh to the Heritage range. According to Mårten, the eventual improvements accrued well beyond expectations to call for an entirely new range with its own identity rather than go by Heritage 2 or some such thing. When the cook surprises even himself, it's always a very good thing.

If we ask why stand-mount 2-ways are so popular, we come across a few pointers. In no particular sequence, there's the visual/psychological aspect. Stereophonic playback is an illusion. It sends mixed messages. Our eyes tell us there's nobody there, our ears try to convince us otherwise. To eliminate the conflict, many enjoy listening with their eyes shut. That's also what a small speaker has over a big one. It's not only less visibly obvious, it obscures (stands in front of) a smaller area of the soundstage. So it 'disappears' more easily with fewer brain gymnastics. Mechanically, smaller enclosure panels are less talkative. They require less bracing or heroic builds to keep quiet. The absence of a 3-way's high-pass filter on the all-important midrange has less reactive/lossy components in its signal path. That benefits speed and clarity. Smaller mid/woofers don't overload smaller rooms as easily/quickly as dedicated big woofers. And just how many lord it over capacious dedicated listening temples? For most folks, the main lounge of standard dimensions doubles as family and listening room. Visually and acoustically, smaller speakers thus win. 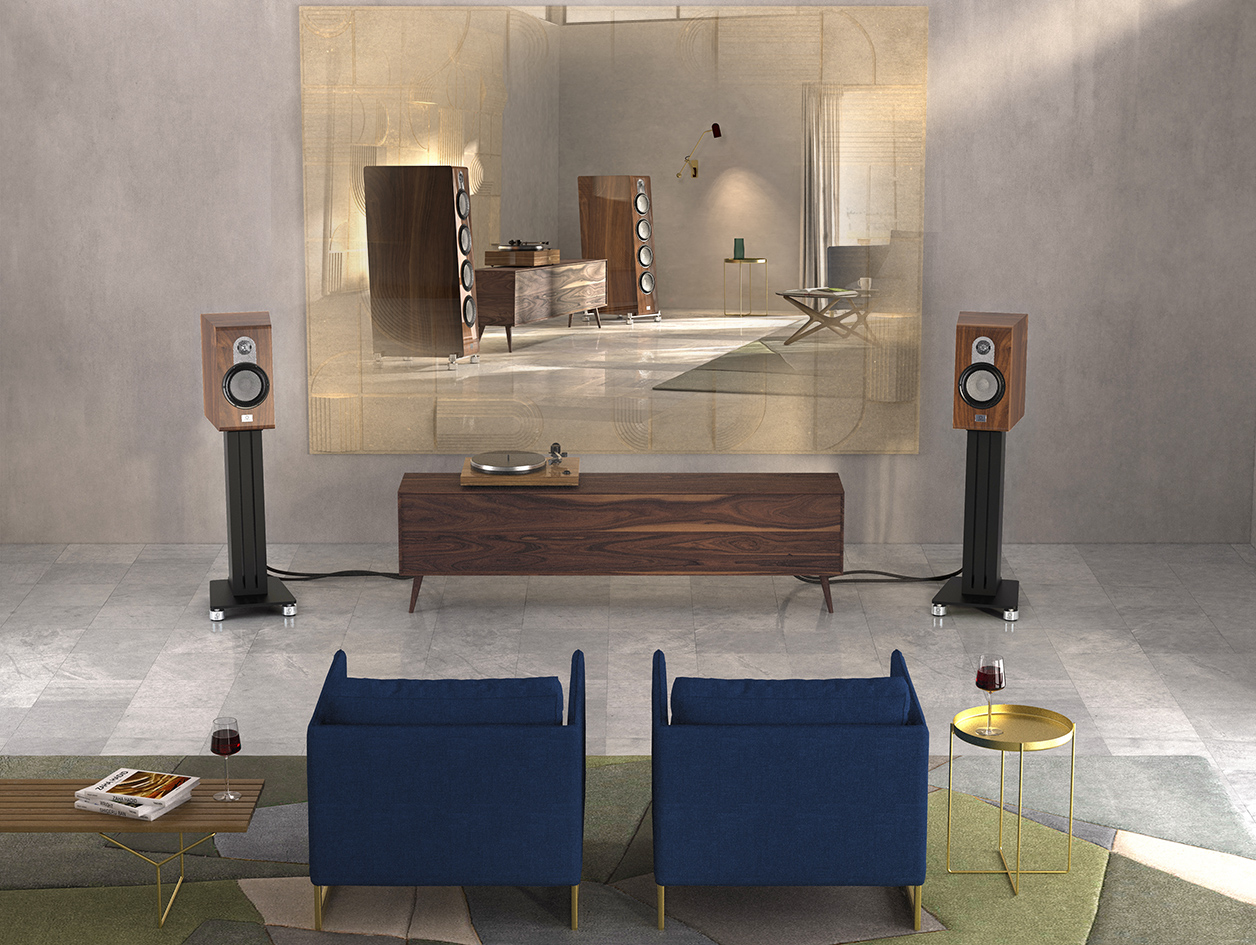 The obvious challenge has always been how to augment liberated out-of-the-box imaging with mature bass power and reach. A 5¼" or 6½" mid/woofer in limited cubic volume only does so much. Enter the ubiquitous port. It 'sings along' in the low end but is usually challenged to stop exactly on time. The fancy term for that behavior is higher group delay. Because a hole in the head doesn't look terrific, most ports aim out the back to not show. Now they work directly into the room's front corners as the areas where three boundaries meet to create high-pressure zones. The upshot is more likely bass boom. Into this scenario landed Kaiser's Chiara as one of the earlier luxury monitors with rear-firing passive radiator. Like a port, it increased bass extension and dynamics over a sealed alignment of the same cubic volume. Unlike a port, it stopped quicker to be better damped. That also cleaned up customary port overlay on the midband for benefits well beyond just more and better bass. Now our little detour circles back at today's Parker Duo. Its front looks like a 7.5" two-way but it behaves like an 11.7" in the low registers. If your room is of standard not mansion size to also sit closer, would you rather look at the Parker Duo or Parker Quintet in the above overlay? With deliberate boundary gain from close-wall placement, the two-way might really be all you want also sonically. If you have money to spare, there's the diamond tweeter, Jorma's statement cabling, upgraded capacitors and connectors to become your Charlie's angel.