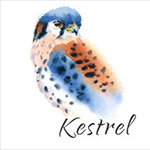 ...the practice among those with power or influence of favouring relatives or friends, especially by giving them jobs…

Because I worked as Pat McGinty's national sales manager before I began my reviewing career, you might suspect some form of nepo behind today's showcase feature. But the only tie-in there would be his Irish-sounding family name and our now living in Eire – tenuous at best. The real reason I felt like writing about him now is actually a seeming disconnect between Meadowlark v1 and v2. A break if you will. Not up, down or bad but good and through.

The Meadowlark I knew and worked for specialized in transmission-line 1st-order speakers with sloped baffles and no built-in amplification. Readers with sufficiently long memories will recall names like Kestrel, Shearwater and Heron, all birds of a well-regarded passive flock.

Insert 10+ years during which Pat worked in architectural custom molding for the type Victorian houses which are common on the upper US east coast he now calls home. When I knew him, it was San Diego. Meadowlark reborn is about a very different fully active DSP-filtered approach. But behind the new designs lurks the same Pat man. Same ears, same sensibilities. Given his prior work, we should probably call him somewhat of a purist seeing how most speaker designers don't believe in the importance of phase/time coherence whereas he built an entire company around it.

Transitioning from minimal-phase 1st-order passive filters with physically time-aligned drivers to now vertical baffles, digital filters and class D power must slot into the same purist drawer. Unless Pat had suddenly chucked all of his prior values which I don't believe for a New York second. As he writes, "during the last twenty years, improvements in speaker performance have come in vanishingly tiny increments because we've pretty much taken our technology as far as we can. Now that HD music is commonplace, the weakest link is the speaker. The time has come to rethink the speaker. Happily,  the following two advances in electronics—when combined—open the door to our next step forward:

2) Powerful and abundantly inexpensive high quality digital signal processing. Used together, they let us tear down the old barriers with these three simple steps:

• Move the amplifiers into the speaker for a short direct signal path.
• Use one amp per band, often one amp per driver. A two-way has two amps, one for the woofer, one for the tweeter. A four-way has four amps, maybe more.
•  Execute the crossover function in the data stream before it is converted to analog and sent to the amplifier. While we're at it, also perform time correction, output limiting, driver linearity correction, room correction and parametric equalization, all without degrading the signal."

Giving us the how and why, Pat then explains the benefits – "dramatically better sound."

1/ A bigger speaker now fits into a smaller box. Instead of relying on a large internal air volume and resonant port to coax more bass from our woofers, we now combine equalization with as much brute force as we like. We trade size for power.

2/ Because the amps connect directly to each driver with a short run of wire and no intervening crossover, we enjoy greatly improved damping, speed and control especially in the bass. Gobs of power with plenty of headroom yield easy sparkling dynamics. That's the life in the music.

3/ Compared to passive crossovers, DSP empowers the designer with a new, complete and fine level of control that makes much higher levels of optimization readily achievable. We've replaced a blunt instrument with a scalpel.

4/ All components in the chain are correctly matched, developed and tested in unison.

5/ Quick, easy and accurate room EQ allows much greater latitude over speaker placement, correction for room acoustics and adjustment to the user's personal tastes. It also adds better functionality and serviceability because modular internal components can be readily serviced by simple swap. The old-style stack of separate components and wires is eliminated and easy control plus music selection is handed over to an iPad or laptop."

The upshot according to Pat?

"The new way results in superior total system cost compared to the old way. You get more for your money. The old way is over. And to be blunt: if it weren't so, I wouldn't be back at it."

Next time you ponder the pros and cons of active speakers, you might include some of the above into the equation. I of course suspect that Pat's experience gained over decades of working with traditional passive filters flows into his new active approach in a more sophisticated manner than would be true for someone who never worked the old way at all to use DSP as a cheap panacea.