Freelance architect 1973-75. Designer & project manager at Basel's Interfair 1976-78. Senior exhibition designer at Dublin's Modern Display Artists 1978-1984. Managing director of Systemworks Ltd 1984-1992. Managing director at Kaos Events Ltd 1992 to today. CEO of sound|kaos 2008 to present. Speaks the Germanic languages, English and French. That was LinkedIn on Martin Gateley. It explained a few things though far from all. My Zoom interview should throw a few more tasty morsels into our kaos kauldron. By way of sometimes multiple reviews, that's already stewed Martin's Wave 40, Libération, SK 16, Vox 3a and DSUB 15 speakers in these pages. None of them followed norms. Many contained custom drivers and parts. What exactly happened during LinkedIn's CV highlights to give rise to the first sound|kaos tonewood speakers? If you remember, those were shaped like eggs on stilts, with an unknown widebander from Germany, exotic ribbon tweeter from Serbia and non-traditional scoop port. They premiered at Zürich's HighEnd Show 2012 and obviously didn't arrive from nowhere. From where they came—and why when nothing in the CV suggests hifi—were two topics I hoped to start us with to gain some communal insight into the creative mind and resourceful character that is Martin Gateley.

On how the audio bug sunk in its teeth, "in fact you were one of the first sparks with your February 2010 review of Sven Boenicke's SLS speaker.

"Wood always fascinated me. My grandfather owned a saw mill. My uncle was a brilliant carpenter. When I grew up, he'd routinely take a half day off just to make something outside his regular commissions for windows and doors. He showed me how he did it. I remember him making me a crossbow. My father worked in a metal workshop. They took discarded saw blades, cut away the teeth, turned them into bands and layered up three to make the bow spring whose shaft was solid wood. The thing was so powerful that when I shot off my first arrow, it went 100 meters. In fact afterwards we couldn't locate it. For a 12-year old boy that clearly was too dangerous a plaything so they quickly took out two of the spring layers to make it more appropriate. But this is how I learnt a lot from my uncle and dad on how things go together mechanically. It's how I became naturally fond of working in wood and metals.

"Exposure to music came from my father who was a real classical music fan. In Birmingham where he grew up, he owned crates and crates of old 78 records. My grandmother was a 4th-generation Jersey French and grandfather Gateley 5th-generation Irish from County Rosscommon. The Irish/English spelling was Gately or Gatlaoich in Irish. Around 1725 all those generations ago, a certain Martin Gately of blue-blooded stock got a maid pregnant and had to marry below stairs. He was disinherited by his family, given 100 guineas and told to leave for England. Though my grandfather died when I was just 5, my father told me much about him. He was a brilliant electrical engineer who built him a scaled fully working submarine which dove underwater in the local park's pond. So I grew up in this hands-on atmosphere of making practical things. That's all come through in my own life. It's after I heard Sven's speakers, particularly his earlier tall narrow beam with sidefiring drivers that something clicked and got hold of me. About 12 years ago I decided that this is what I wanted to do. It started off purely as a hobby. My father died in 2001 here in Switzerland. After that I travelled more frequently to come and look after my mother. At the time I was really busy with my kaosevents exhibition business in the UK. By ~2008, I read an article on the restoration of a Stradivarius violin by an 18th century French luthier. In 2007, they'd opened the same instrument up again to find a small label stuck to the inside of the top spruce plate. The label had an address on it. It was for a saw mill and timber supplier down the road from here. That nearly seemed too much of a coincidence. About a year later, a local historian put a few facts together for me. At the time of that violin's restoration, the Swiss had started to export entire Gruyère cheese wheels. Those moved by coach inside spruce crates. One such shipment must have ended up in Paris in a big crate where this luthier found it in a local cheese shop. He probably took one look at the wood and realized what it was.

"Antonio Stradivari and his contemporary luthiers got most their wood out of the Dolomites so from high altitudes. Spruce grows faster in the summer but like most trees shuts down in the winter. Trees near the snow line grow exceedingly slow. That puts their year rings far closer together. I read up on a modern thesis by a current violin maker. He did a lot of research on the subject.  A normal spruce may grow 40-50 years, high-altitude spruce can go up to 200 years. Their cellular makeup is more homogenous because they don't undergo the usual growth spurts during warm weather. For them it's always cold. They grow very slow but very consistent. As a result their wood has more elasticity. That relates directly to superior sonics when vibrating. It's what makes such wood the first choice for top musical instruments. All of this had begun to pile up for me when I decided to do something about it. I knew that I'd use the very same Swiss tone woods. I found a local supplier in Graubünden who specializes in woods for luthiers. Many of the top European instrument makers travel to his saw mill to hand-pick their woods. I always knew that I didn't want to get into mainstream speaker design but do something quite different. So the local tone wood and musical instrumental angle, my family's background in wood/metal fabrication, my dad's love of music and playback passed on to me, your review of Sven's solid-wood speaker then my subsequent audition of it all accumulated until I got the message. It's how sound|kaos came about. 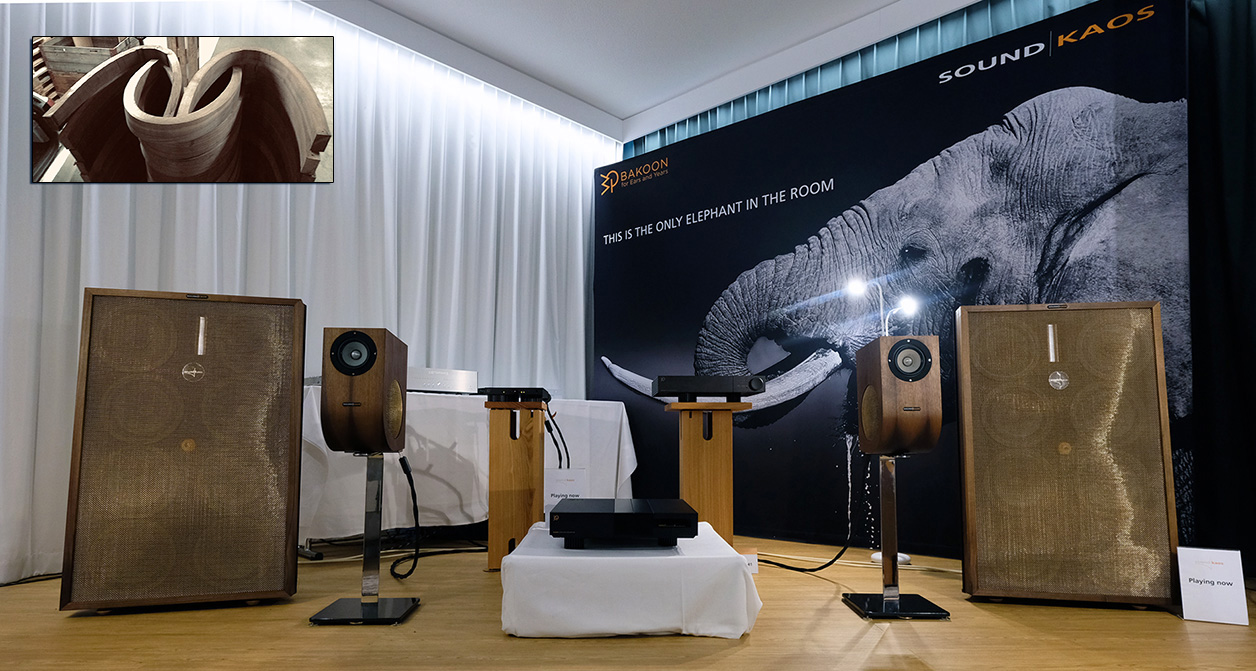 "I soon realized that it wouldn't be easy. My first prototype looked a bit like a banjo. I knew that I needed help. I investigated UK resources through local magazines and found Christien Ellis of CE Electro-Acoustics. [He's also worked with Node Audio on their radical Hylixa project, with Code Acoustics, Q Acoustics, O.S. Acoustics, Musical Fidelity and Rega – Ed.] I rang him up and asked whether he'd take a look at my banjo speaker. At first he wasn't keen. Once he heard of the tone-wood angle and other ideas, he softened up. Each time I've seen him since, he reminds me of how all his other consulting work is mundane run-of-the-mill stuff he must do to keep the lights on. So he really enjoys helping me with my unusual projects. They take him down less-trodden paths. Mine is a completely different approach. It stimulates him in ways textbook commissions do not. But without people like him who contribute their own highly skilled expertise, I could have never done this. My first love is design and combining it with sound in an obsessive enthusiast's way. Together we explore unusual areas to get different results and offer an alternative to mainstream sound.

"I remember my first Munich show. I watched a visitor to my booth. By his entire demeanor he clearly enjoyed himself just listening to music for about 15 minutes. Afterwards we started chatting. I explained some of my design concepts. His jaw dropped. He protested. "You can't do that. That's not what other speakers manufacturers do!" I looked at him. "I've been watching you for a while. You seemed to enjoy yourself." "Very much so" he confirmed. "What then seems to be the issue?" Preconception on how things should be done interfered with first-hand experience to the contrary. As you've written about at length of late, it's the same with subwoofers. When you hear one that's truly different like my DSUB 15, it causes an initial disconnect. It always fascinates me to step out of the well-worn tracks and try something new. It doesn't always work as expected. At least then you know from personal effort and experience. Unlike accepting something by rote, you might even understand why it wasn't a good idea. It's already been a long learning curve for me. But that's as nothing compared to the enjoyment I get from it. On top of it come customers and other people who really appreciate our speakers. But there are still about 80% who will never lend an ear or enter my exhibits because their beliefs conflict with how we do things. They're not even curious to have a free try. They prefer to just follow the crowd."