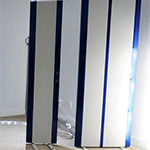 It's been a sizzling summer of hot cross-country tours by the legends of music. Not to be outdone by the likes of the Rolling Stones, Magnepan has likewise been on tour with their legendary new 30.7 flagship speaker, offering short 30-minute listening sessions at select dealers hosted by 46-year Maggie veteran and Marketing Manager, Wendell Diller. Not to disparage the stage presence of Jagger but he doesn't have quite the moves like Wendell. So when Adrian Low of Audio Excellence asked if I'd be interested in attending, I booked my time slot and strapped on my reviewer gear. 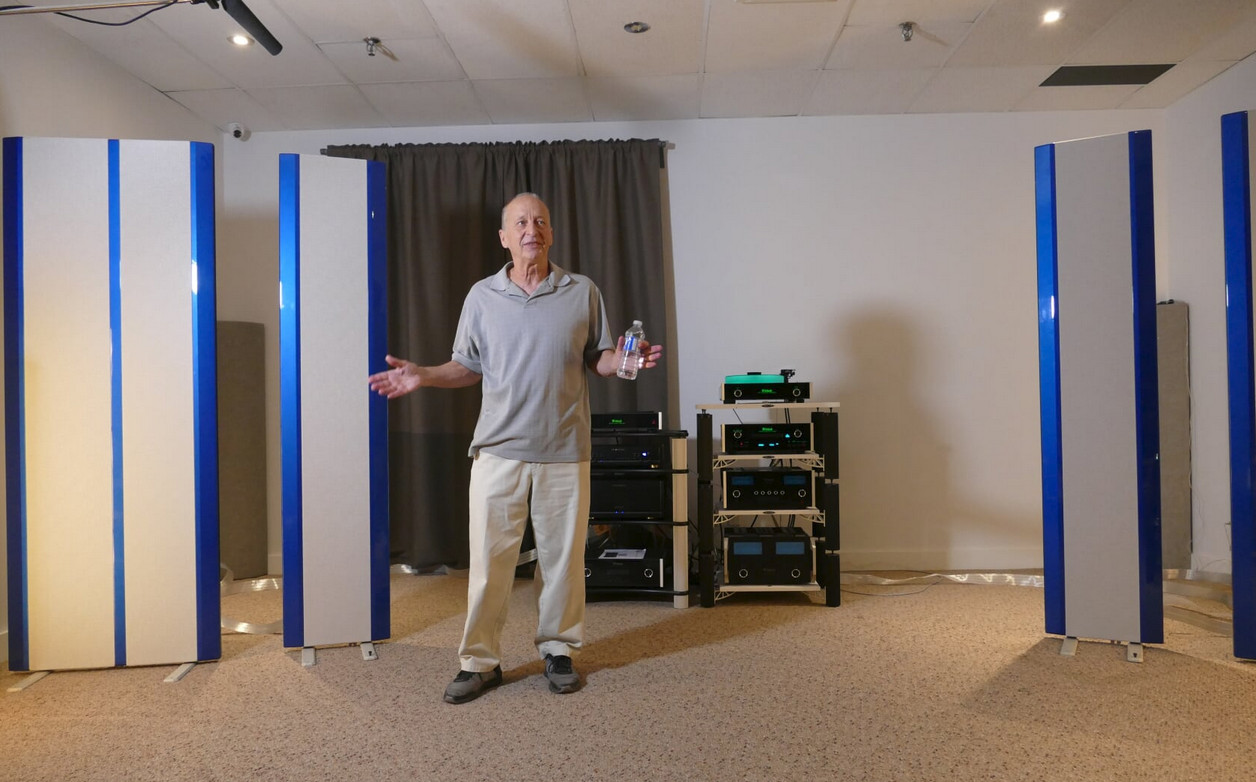 Why should I be so excited and what are Magnepans? Here's a short history. In 1969, American audiophile Jim Winey from White Bear Minnesota sought to replicate the sound quality of an electrostatic loudspeaker with planarmagnetic technology in an open dipole design (no cabinet) to achieve greater bandwidth, higher volume level and superior reliability. That company was called Magnepan. From inception, each successive product was met with universal acclaim. The Magnepans simply worked and worked well, setting benchmarks and erasing the definable boundaries between mechanical reproduction and 'you are there' realism. They offered performance vastly disproportionate to their asking price and have consistently merited top honors against all contenders. Even their least expensive siblings meet that criterion to enviable degrees, with larger versions contributing more bass panel area and greater output levels. The introduction of refinements like the quasi-ribbon and pure ribbon merely succeeded in pushing a superb design closer to perfection. 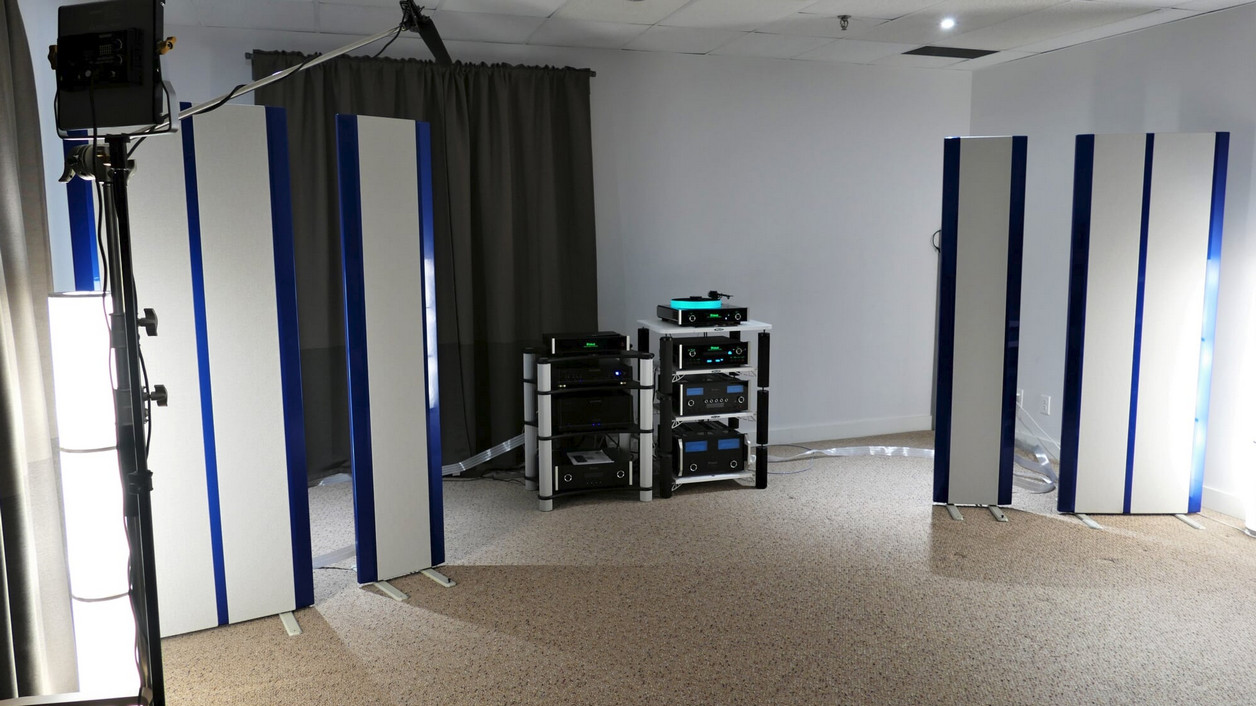 The Magnepan 30.7 is the company's indirect descendant of the fabled Tympani series, a multi-paneled statement piece widely regarded as one of the greatest loudspeakers of all time. I say indirect because the evolution that has occurred since the retirement of the Tympani which flourished in the current 1, 3 and 20 series has been a convoluted learning curve of both trickle down and trickle up technology that has quietly been incorporated into their entire line. The 30.7 discards the 3 panels per side assembly of the Tympani for 2 while honoring the appearance of the original by a clever trick of cosmetics. The new flagship borrows from the 20 series by donning its greater height to create a more ideal line source and allow more area on the bass panels. Where the Tympani could reach 32 cycles with authority and the current 20.7 descends to 25Hz , the new 30.7 plumbs its way to the 20-cycle mark with massive authority and control.

The new loudspeaker marks Magnepan's first attempt at a 4-way. The slimmest panel contains a ribbon tweeter and quasi-ribbon midrange. The larger panel houses the bass driver and introduces a new transitional upper bass/lower midrange coupler to create a more seamless crossover arrangement with regards to radiation and responsiveness. Also unusual in a statement effort, the designers have specified single amplification and have no provision for bi-amping. Magnepan is confident they have got the mix right and have removed the possibility of achieving a less-than-optimal result. The 30.7 is specified as a 4Ω load and requires amplification with both numerical horsepower and high current. 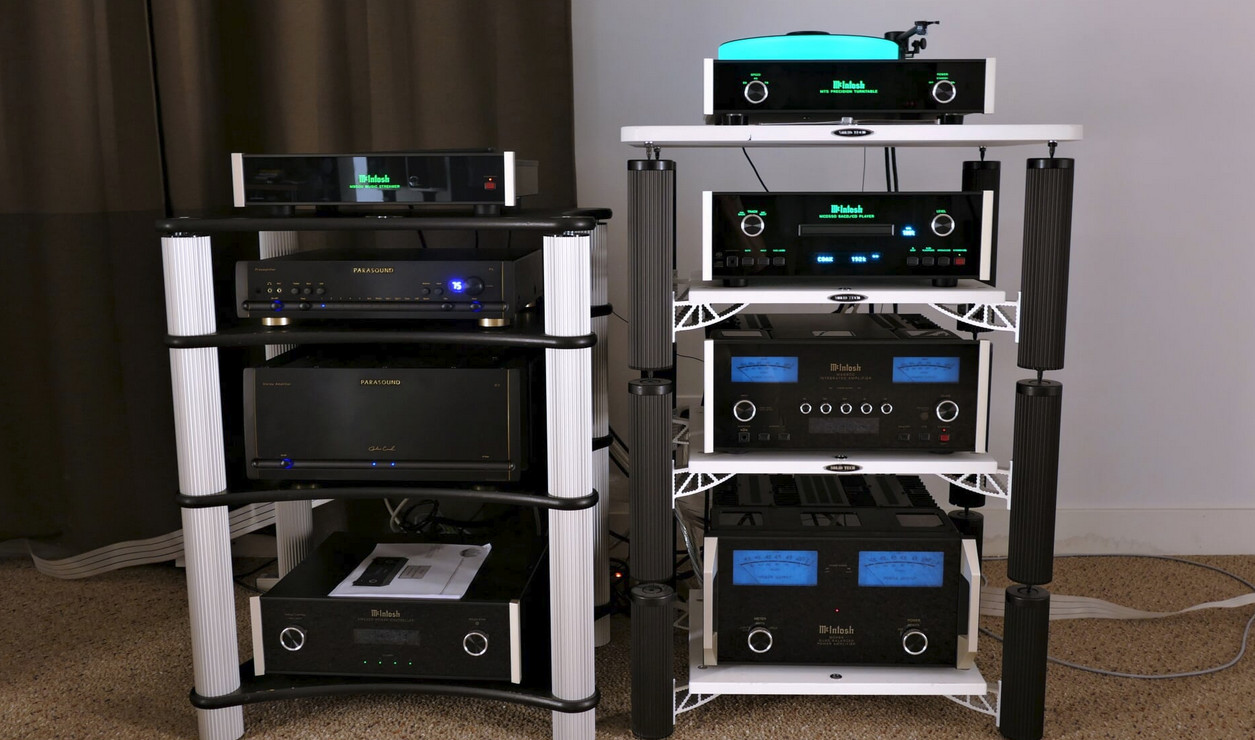 For the demonstration session, Audio Excellence and Mr. Diller had set the stage well. The audition room was of a size suited for large statement pieces and the chosen ancillary gear for the 30.7 consisted of a Parasound P6 preamp, JC 5 John Curl stereo amp, McIntosh MS500 music streamer, McIntosh MCD550 SACD/CD player and Nordost cabling. The musical selections were wide with an emphasis on acoustic instruments and vocals, showcasing an assortment of scale challenges from small and intimate to massive orchestral with full dynamic swing. Mr. Diller entered the room and following a brief introduction by Mr. Low, the door closed and the 30-minute countdown began. Mr. Diller began his presentation by emphasizing the 30.7's power response. To prove the case, no listening chairs were provided, the intent being for the audience to experience the speakers' abilities throughout the room. On that performance parameter, the speaker proved remarkable, exhibiting consistency of output and tonal balance regardless of position. 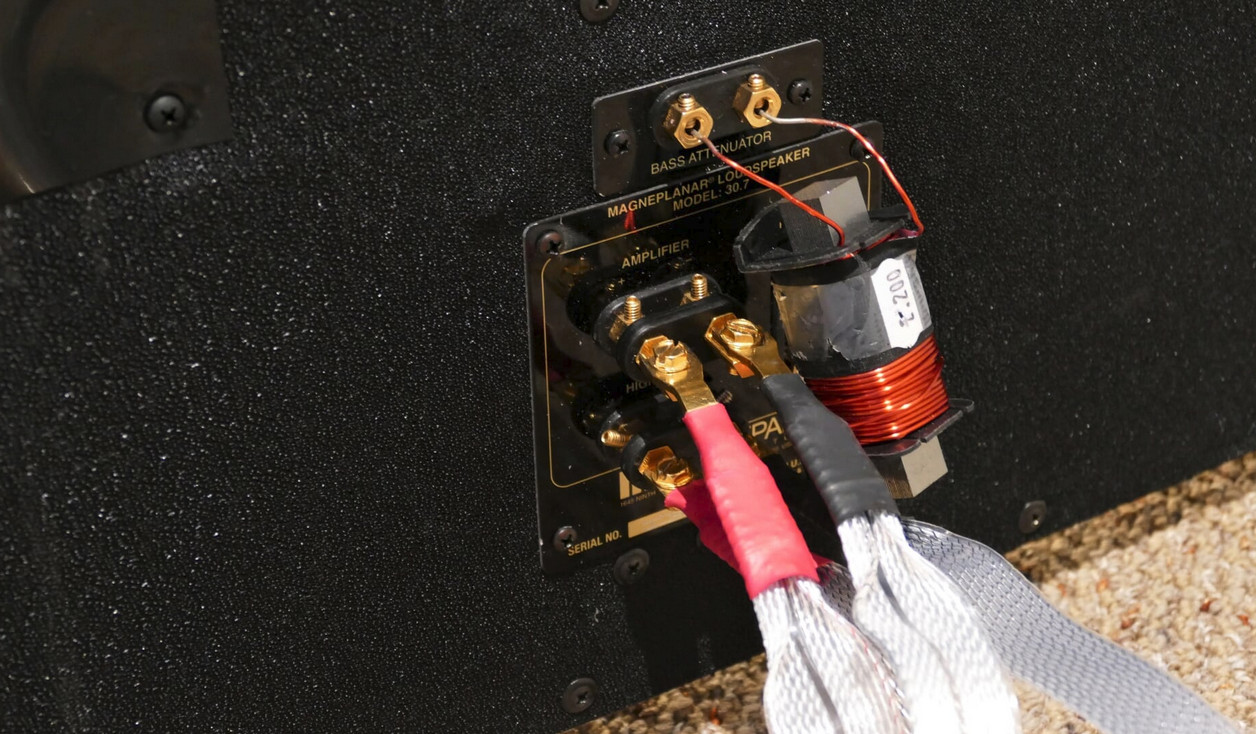 Other parameters likewise fell into benchmark ideals. The crossover proved flawless, challenging the ears  to identify any transition even at close quarters. The midrange and highs were naturally detailed without etching. Despite some room nodes, the upper bass and deep bass were articulate, visceral and transparent, showing the best Maggie tradition of boxless bravado now flexing its 20-cycle muscle. On classical Reference Recording demo material, soundstage perspective and imaging showed huge scale and massive power in accordance with the designer's intentional 11th row seating reference . The imaging focus was something I would have liked to explore further but the teaser clock was ticking and there was a lot to take in. The 'off the panel' experience, a fundamental to the Tympani of old, was clearly present in the 30.7 and indeed, the speaker could sonically disappear as a source. The new Magnepan howeve, showed its more advanced nature with consistently greater transparency and ease of dynamic agility.  What impressed me most and caught me completely off guard was an accidental moment of material played at low volume. The detail, scale and dynamic nuance all remained intact at close to whisper levels and the effect was totally haunting. Any audiophile craving a late night listening session where loudness is a no-no would be served to perfection. A flagship that could play the quiet troubadour? Check that requirement off your wish list. 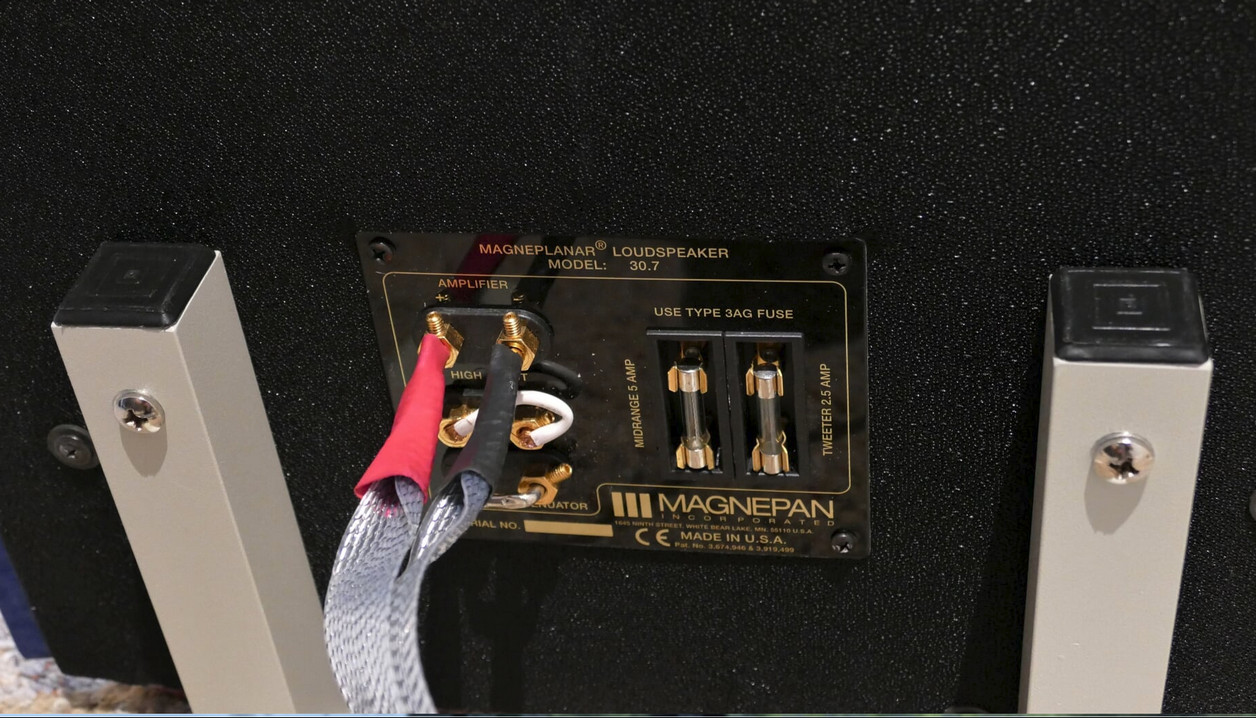 And the clock ran down. This was a sad case of a classic tease. Leave the audience thirsting for more. No one wanted to leave and attendees began to bring out personal CD but fresh hordes of listeners were already gathered outside for the next session with more in adjoining rooms. It was time to leave. I thanked Mr. Diller for his fine effort and told him that Magnepan had come a long way since the early 2167F which started me on my audiophile journey and which are still remembered with nostalgic reverence. The next batch was flooding in the doorway so I left him in momentary peace to prepare for the following demonstration. 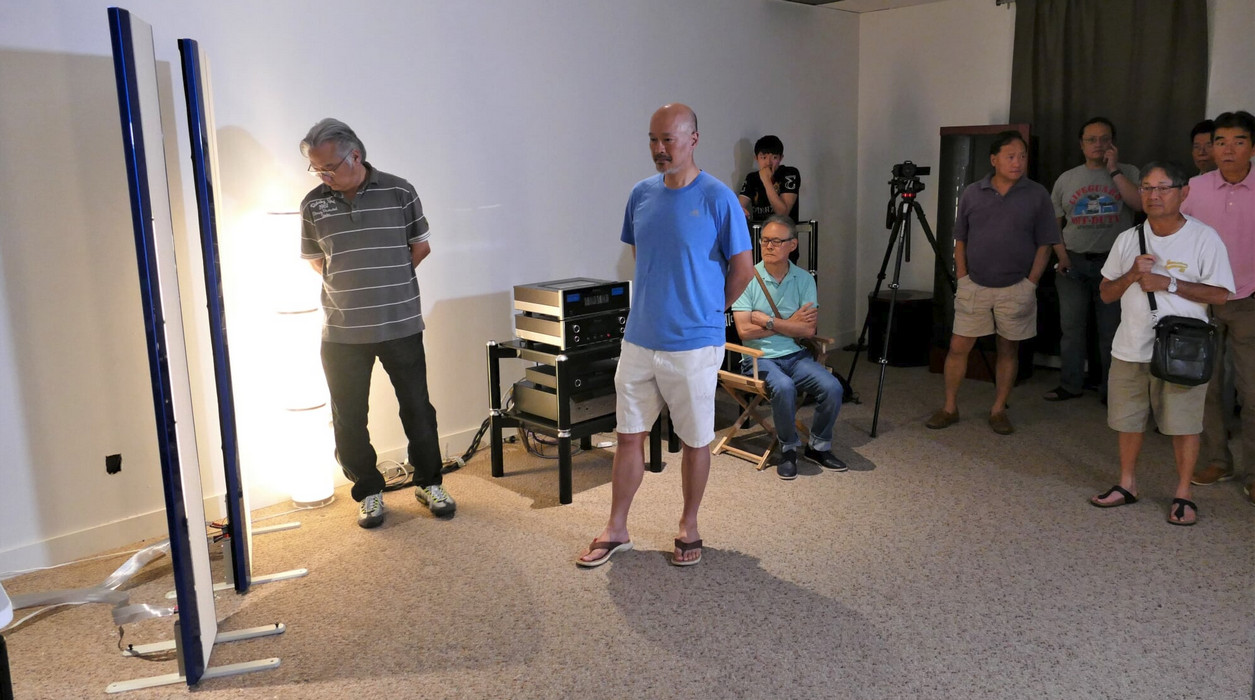 Was Magnepan's road show a success? It managed to fire up the imagination of seasoned and fresh audiophiles as well neophyte and jaded reviewers. That's quite an accomplishment. The 30.7 has already garnered critical acclaim and comparison to product over 20 times its $30'000 price and demand has already outstripped production. That's almost unheard of for a flagship effort. And as a sideways tantalizing teaser, for those whose wallets cannot open so wide, Magnepan has a solid line of other products that may bring lesser size but equal joy. Both Wendell Diller and Magnepan have still got the moves and they're all in the right direction – forward.