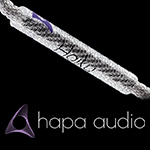 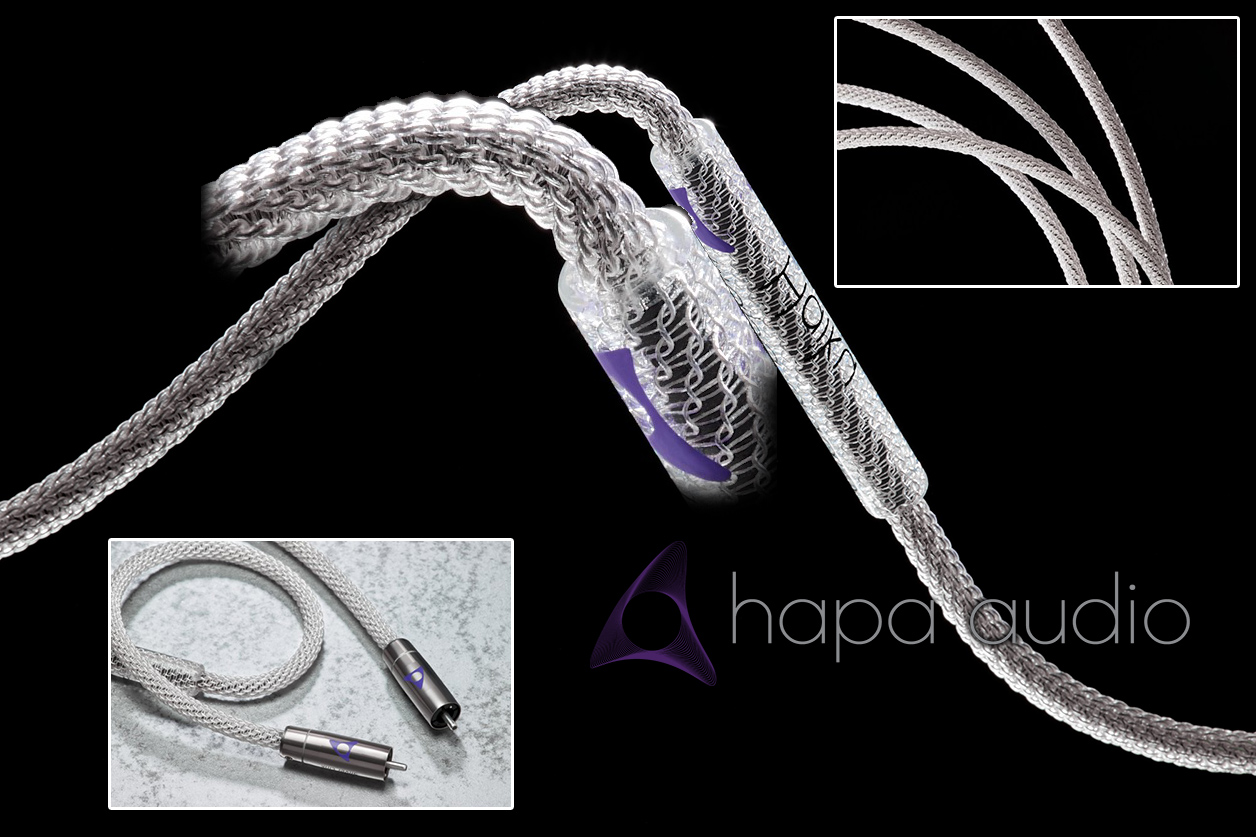 From Jason Wong of Hapa Audio, "Haiku is the first silica-dioxide-based aerogel RCA cable and most sophisticated instrument developed by us to date. We invented the use of aerogel cable dielectrics which now is an integral part of our flagship cable with nano-polished pure silver wire suspended in aerogel then clad in our most advanced shield. Our ultra-pure continuously cast silver gets meticulously polished to 120nm refinement then protected by lattice shielding designed to at its closest point run perpendicular to the signal core and reduce crosstalk to a statistical minimum. Unlike conventional shielding which encases the signal core in a metal barrier or a simplistic twisted pair which exhibits very poor shielding, Haiku utilizes a shield that reduces signal loss from crosstalk without compromising shield effectiveness. Composed of pure silver Litz combined with a passive carbon-fiber shield, our lattice geometry allows for ideal shielding composed entirely of silver like our nano-polished signal conductor and ETI connectors machined from pure-silver ingots for both signal and shield pins. As an homage to the groundbreaking aerogel material, Haiku uses hand-cut, polished and blow-torched glass tubes for transparent labels."

Slightly edited like what follows, that was the press release for the Haiku RCA interconnect. To learn more about Jason's aerogel dielectric, I found this: "The quest to create the most ideal dielectric is hardly a new endeavor. In fact companies spend many hundreds of hours hand-weaving Teflon-thread dielectric matrices to reduce the amount of dielectric that touches their signal wire. Other materials like Teflon and cotton are popular, too. Here density is one of the least understood dielectric properties. A dense dielectric like Teflon tends to overdamp the conductor which it touches. Overdamping strips away nuance and detail. On the other end of the scale, air dielectrics allow a wire to excessively ring. That causes aberrations in the time domain and a fuzzy, amorphous, overly strident sound. One of the more recent dielectric trends is cotton. Although at 1.5g/cm³ slightly lower in density than Teflon, cotton introduces a major problem. It is permeable to the environment so conductor oxidation over time is inevitable because the internal wire is exposed to any room's natural humidity. Oxidation results in loss of detail and darkening of the soundstage. With a density of 2.2g/cm³, Teflon is very dense and tends to overdamp. Symptoms include bass boom, a muddled midrange and treble detail that's hazy and bright. Despite being less permeable to the environment, it's still susceptible to oxidation as there's always a gap between wire and Teflon dielectric. Aerogel has the entire field beat on lowest density and the added benefit of being 100% hydrophobic so any wire clad in aerogel is immunized against oxidation. At a mere 6% the density of cotton and a mere 4.5% of Teflon, aerogel comes in at 0.1g/cm³, making it several orders of magnitude lighter than either. Where air dielectric has virtually no damping properties, aerogel exhibits close to ideal damping properties which allow the wire to freely move without ringing."

"Aerogel is a man-made silica compound with the unique feature of being the lightest solid known to man. Boasting an air-to-solid percentage of 99.8%, aerogel is an incredibly effective thermal insulator used by Boeing Aerospace and NASA for cutting-edge engineering solutions. Because of its light weight and incredible thermal properties, it is generally reserved for exotic purposes such as serving as a collection grid material on space probes for cosmic dust capture and insulation for the Mars Rovers."

Hapa's intro post dates back to August 28th 2020, making the company two years old. "I'm sure many of you remember Bolder Cables whose Wayne Wananeen made some of the most amazing cables at the time. I replaced several of mine with Bolder cables over the years. I learned a ton from Wayne's designs as well as his general knowledge which he was always more than happy to share. He may not have realized it at the time but much of what he taught me pushed me in a direction that I likely would not have been able/interested in going. And that was braving designing my own. Over the years I built some monstrously ugly designs which took weeks if not months to make to be more trouble than they were worth. Something I always wanted was a new geometry. I had spent a ton of time with star-quad cabling and found many advantages. For one, it shields itself purely by geometry. Due to the spiraling star quad, it induces a field that inherently rejects RFI and EMI noise but the geometry also causes severe crosstalk between signal and common/ground due to their proximity across the cable's length. It occurred to me that perhaps I could create something based on star-quad geometry but utilize proper spacing to prevent crosstalk. This could only be done by proper spacing of all leads. After much experimentation I managed to solve the problem with my dual chirality star geometry. Unlike star-quad geometry, DCSG doesn’t just have right-handed or left-handed chirality but both. It literally doubles the number of leads which standard star-quad utilizes. Because all leads space evenly and only cross at 90°, it virtually eliminates crosstalk."

On Jason's website, you can read up on more details of his approach like angel hair litz and resultant cable models. I predict that you'll find it educational…