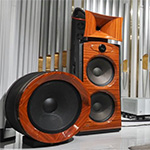 Dust-up at the Diesis corral 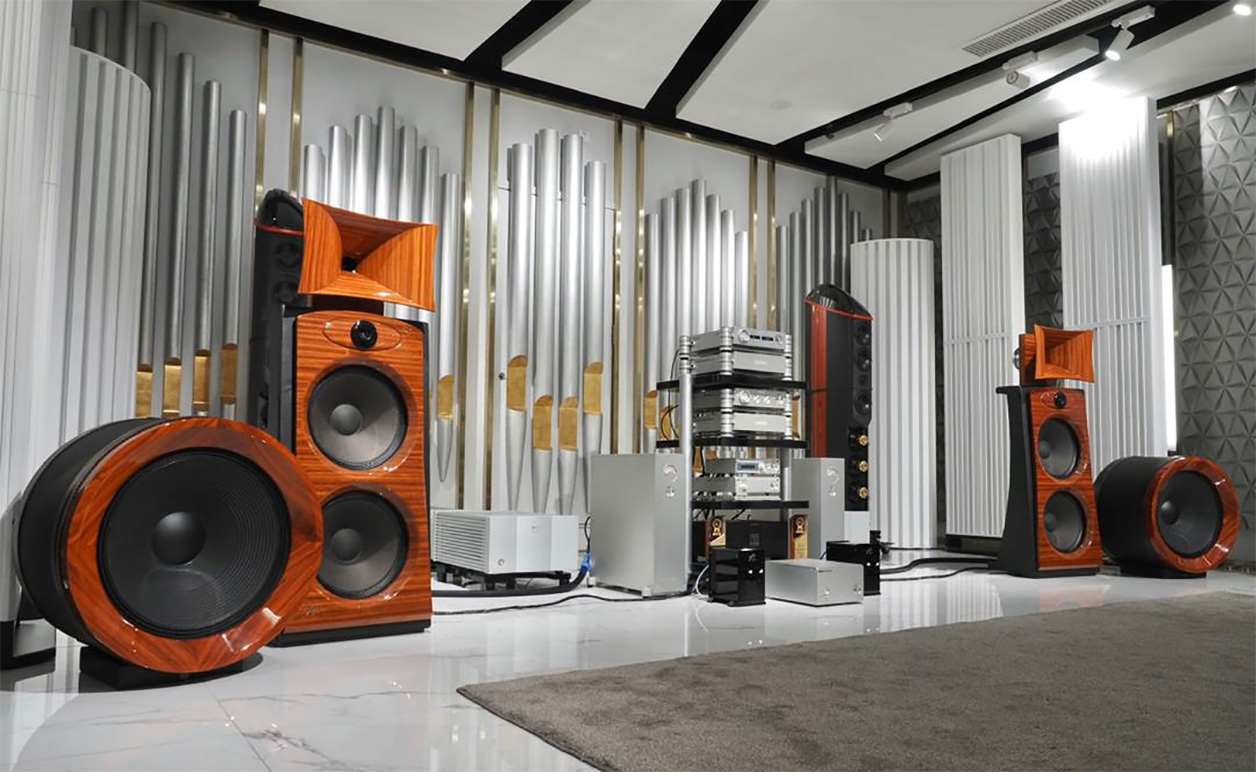 Whilst waiting on my Diesis Audio Aura review pair, company boss Giuseppe Gabbarini checked in from Italy to explain the delay. "We've been very busy filling orders and just delivered 10 pairs, added new distributors in Germany and Israel. We are currently preparing two pairs of Roma and one Roma Triode for NYC's Rhapsody Audio, a pair of Caput Mundi for Holland and more." Above we just saw a Roma S.E. with companion 18-inch Bonham open-baffle subwoofers at a 2021 show exhibit of China's Forthwise distributorship. 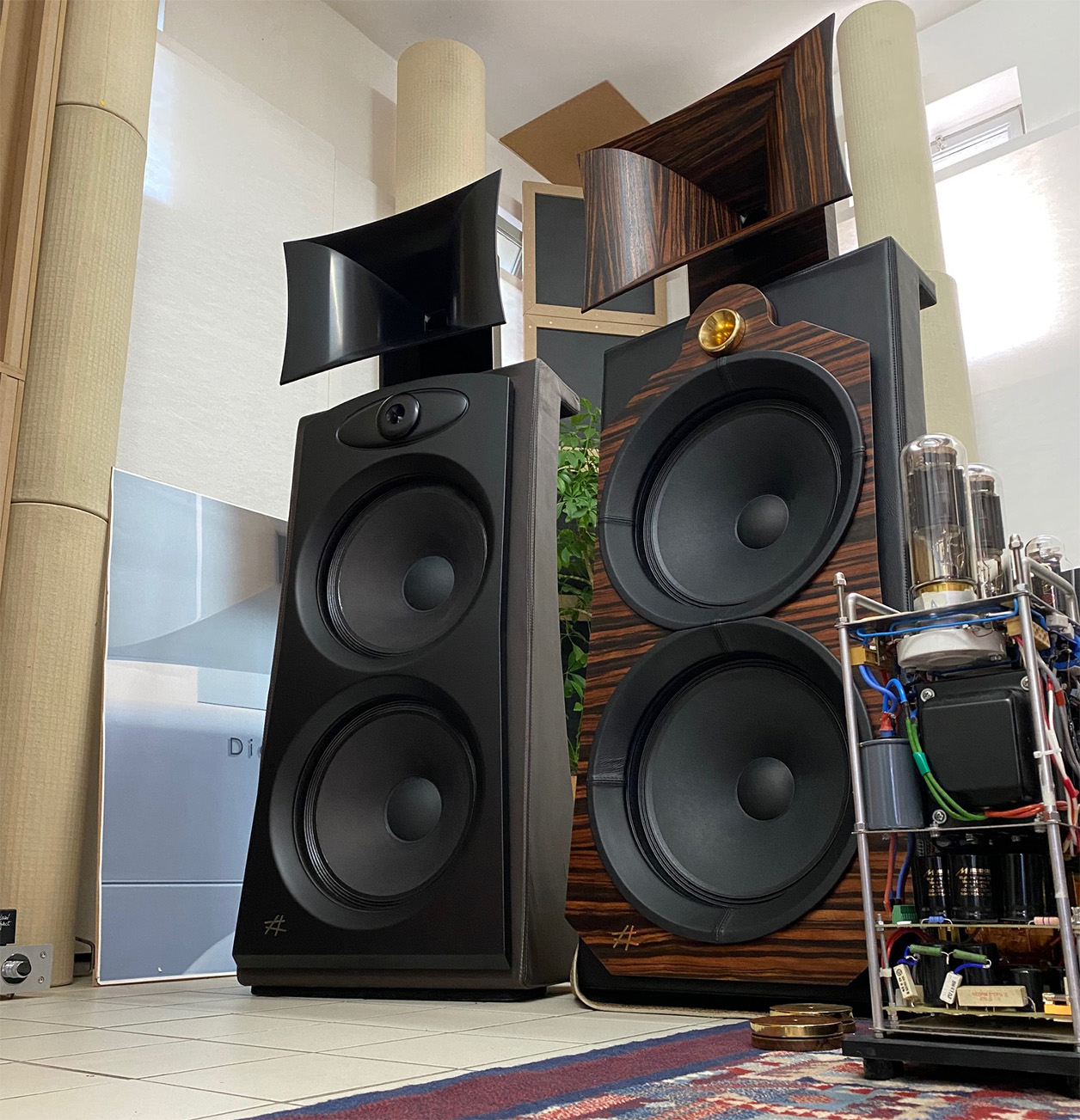 Next are a pair of Roma and Roma Triode speakers at Rhapsody Audio in the Big Apple whose store lineup and concept are currently spawning satellite operations in key US locations. 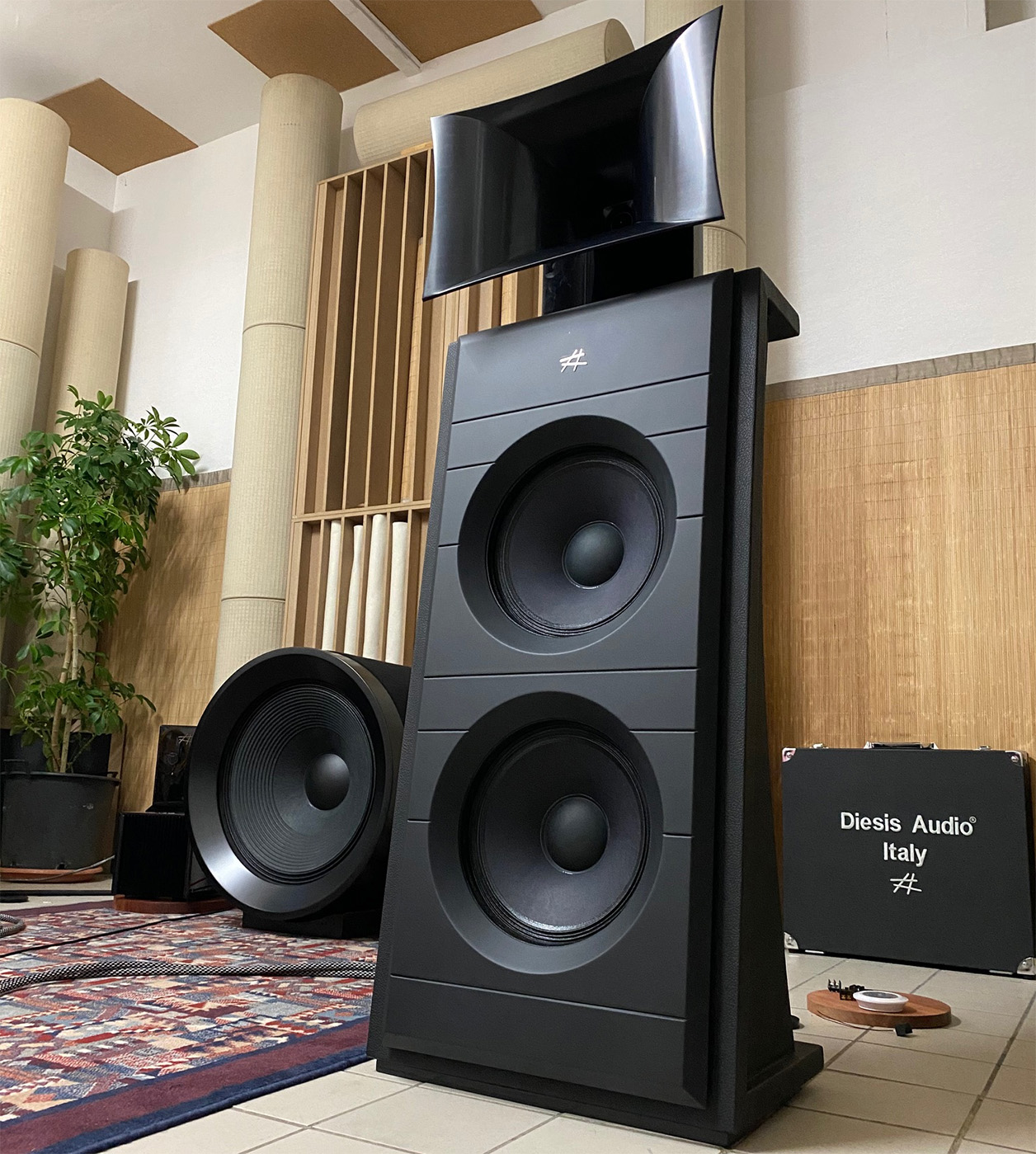 This Caput Mundi with Bonham is hosted by Audio 21 of The Netherlands. 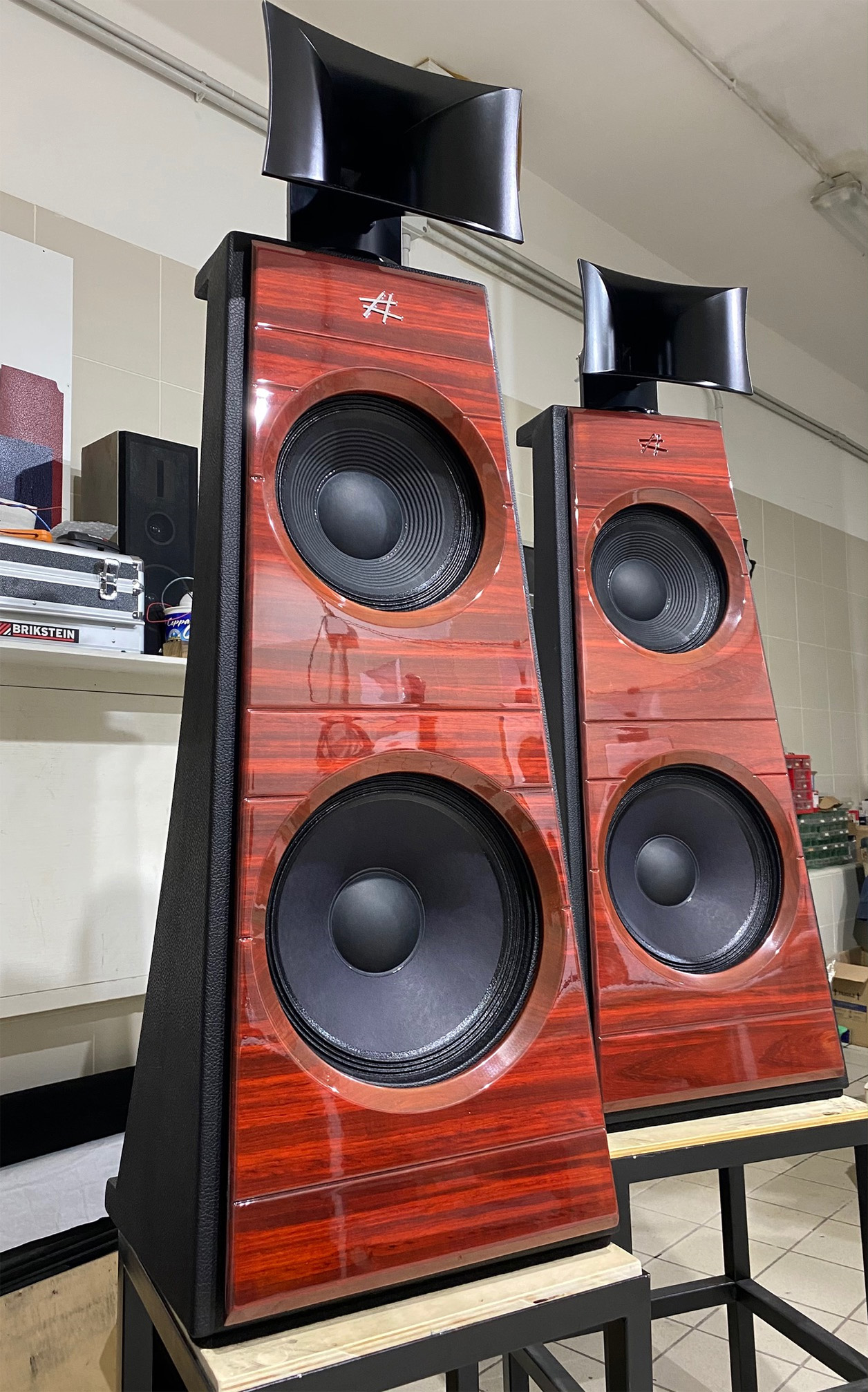 This pair of Aura is headed for Ibex Audio in Heidesheim/Germany. 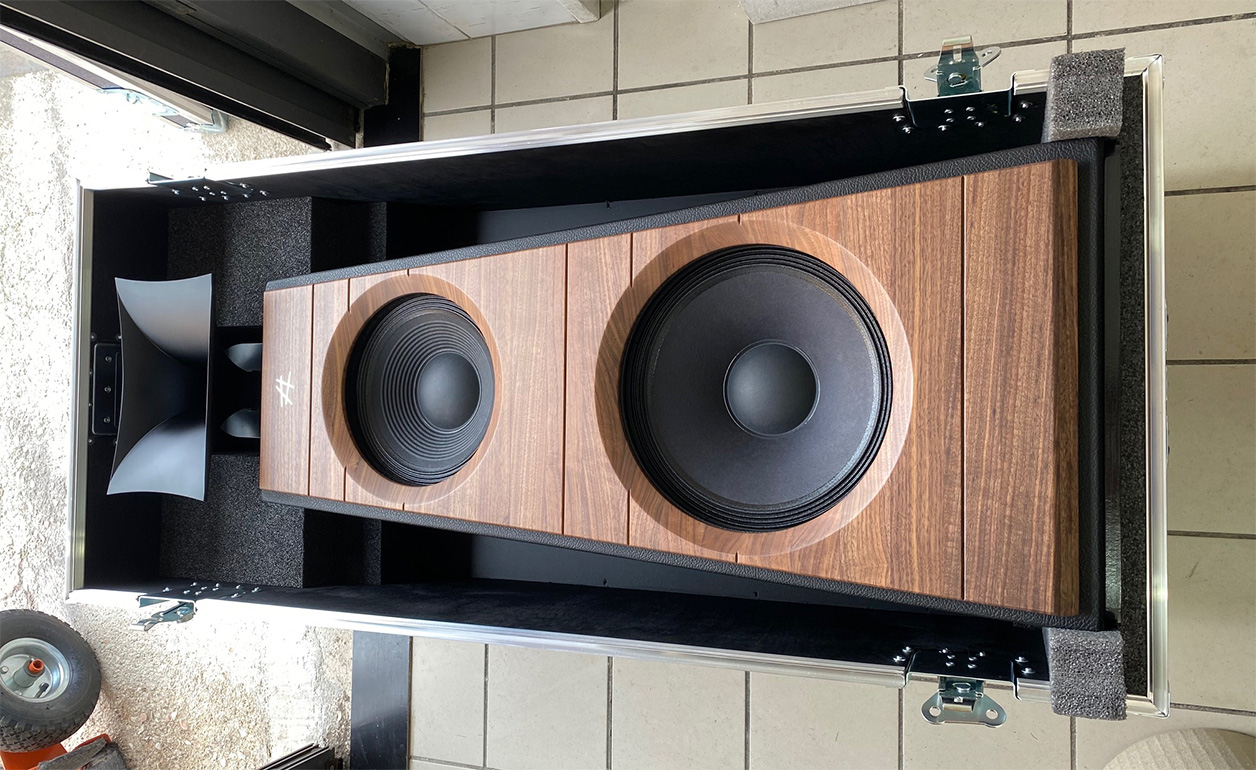 Another Aura is booked for delivery to Sonic Bliss in Israel. 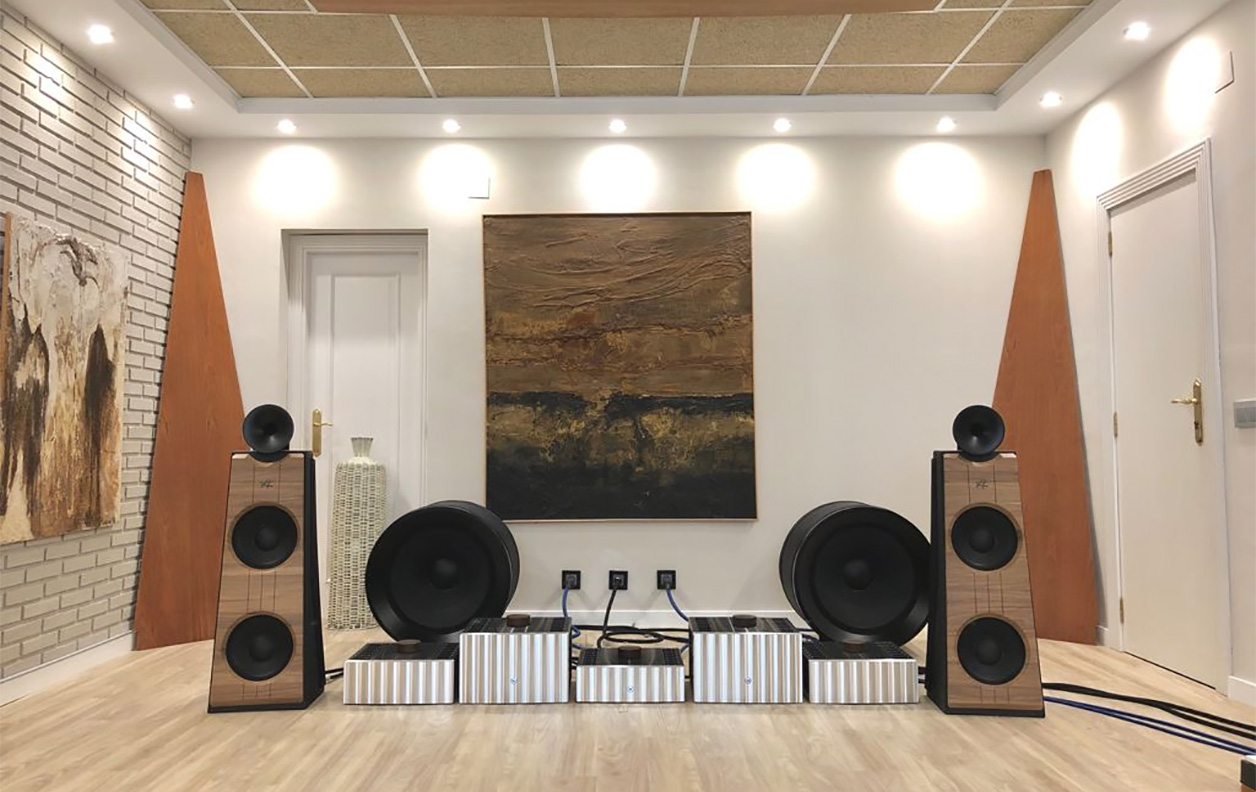 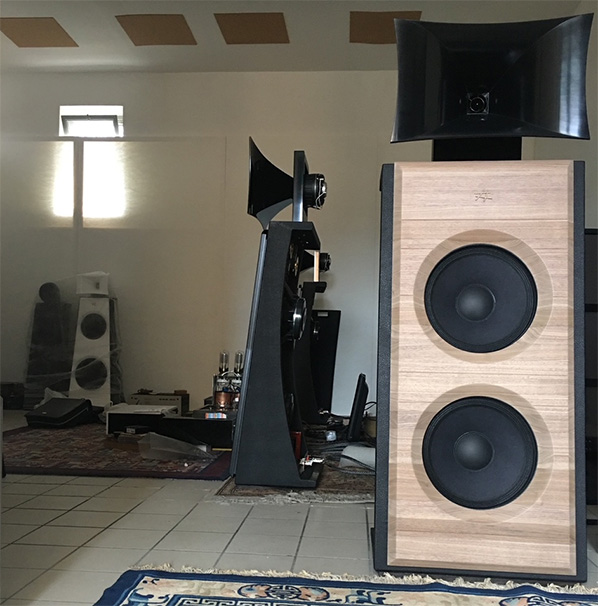 Thi above Ludos/Bonham install is at Madrid's Ars Antiqua Audio while the Caput Mundi at right is at Nikitskiy 12 in Moscow.

Hifi has its fair share of acronyms. NFB abbreviates negative feedback. NOS stands for either new-old stock or non-oversampling. The former applies itself mostly to vacuum tubes but could equally pin to unused vintage parts like transistors/capacitors. No oversampling refers to D/A converters. To coin a third three-letter creature, let's have NSB mean no stupid boxes. It arrives at open baffles which mount drive units to open-backed planks. Speaker brands promoting them include Decware, Emerald Physic, Kyron, sound|kaos, Spatial and Diesis. In one fell stroke, NSB eliminates time-delayed reflections through driver diaphragms; internal resonances aka box talk; heroic attempts to absorb, damp or kill half the generated acoustic energy inside an enclosure; and the rising costs of making ever larger heavier boxes ever more inert whilst finishing them off to luxury standards in shiny lacquers, leather, veneer or anodized aluminium.

Free lunch is mostly a myth. Open baffles want their own pay. Driver front/rear waves are free to wrap around their baffle edges. In-phase/counter-phase signal meets to cancel out. This creates far fewer sidewall reflections to become a major bonus of integral room treatment. It also means far less efficient conversion of raw woofer diameter to bass power and extension. Where a compact ported monitor might do a pert 35Hz from a top-quality modern 5½" mid/woofer whilst trading sensitivity, an open baffle with 2 x 10" woofers might peter out at 55Hz. To compete on bandwidth, dipole woofers routinely double up and quickly grow to 15" even 18" across. Wherever narrow means chic, broadly baffled speakers appear more agricultural. Dipoles also eliminate the usual underwear which hides from our view hookup wiring, driver magnets and filter parts. Their private bits are on open display unless an acoustically transparent rear grill conceals them.

Finally, the shove, crack and pop of familiar sealed and ported bass doesn't fully translate to open-baffle bass. Its woofers aren't back-loaded by air that's trapped or at least compressed inside a box. They see the entirety of our room's air volume. Hence dipoles compensate for their weaker back loading with stiffer suspensions. From all that we expect them to not just look different than box speakers but to sound different and behave different within our own four walls. We expect far more air displacement from seriously increased cone surface so dynamic advantages. Like omnis, dipole radiation well into the presence region predicts richer tone from deliberately playing the room's ambient field.

What exactly absence of box effects sounds like remains an open-backed question to all those who've only ever heard box speakers. For that aspect, they have zero precedent. That's most of us. 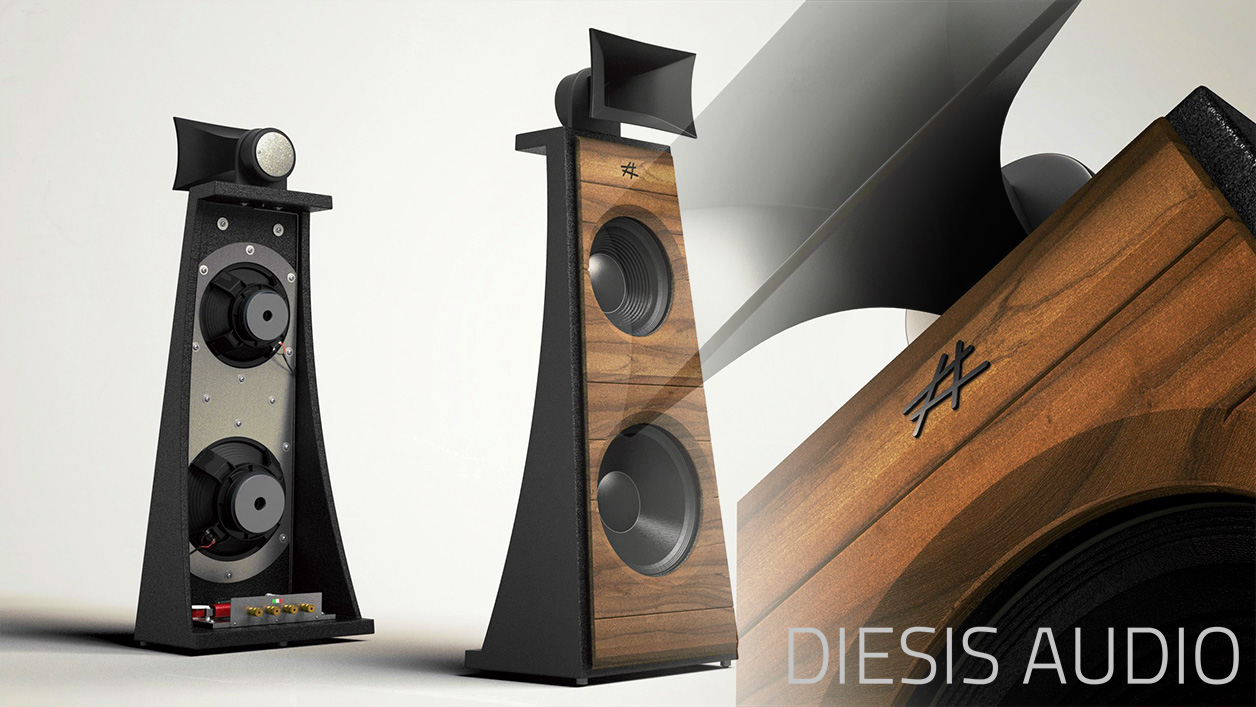 If any of that has you curious, doing some due diligence on Diesis then following up with a visit to a dealer for an audition might just be in your future? 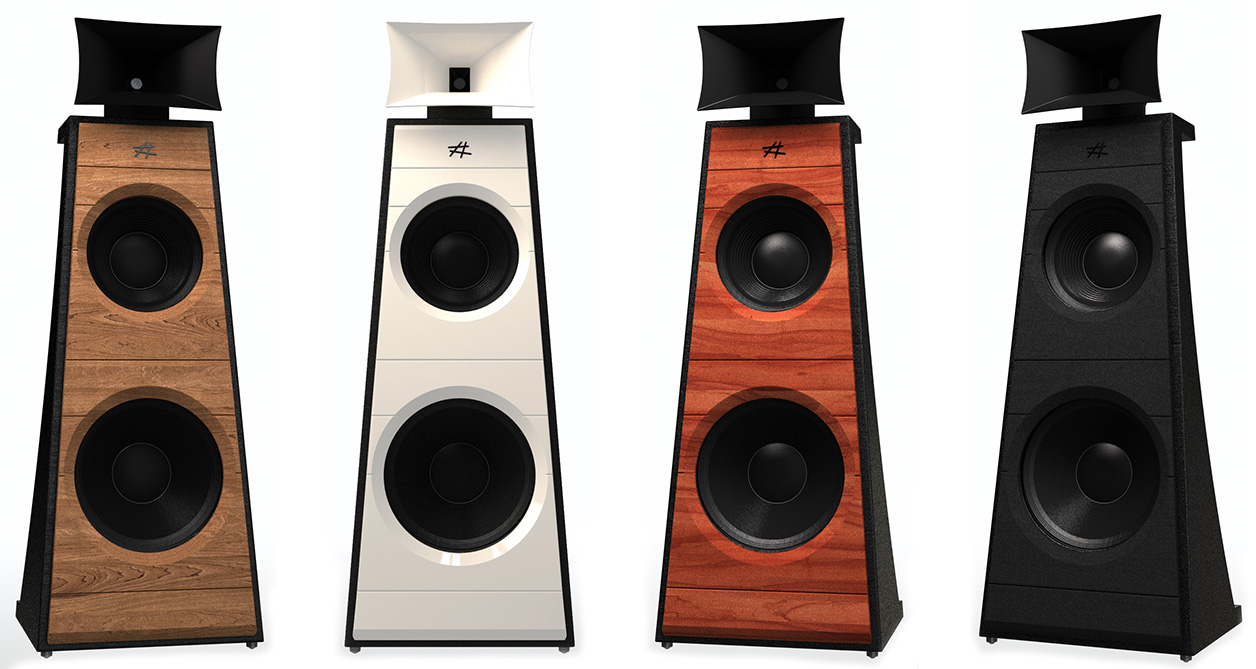 It should come as no surprise that an open baffle's operational principle of greater room involvement, larger cone surface and categorical absence of box bass with or without port effects lends itself particularly well to classical music. That repertoire contains no electrical bass whose highly damped textures are perhaps best rendered with active sealed speakers based on high-feedback class D for maximum control and violent smack. It contains no synth-generated infrasonics to demand bass extension beyond the reach of open baffles. It promotes a listener perspective which is surrounded by copious space and distance to prioritize reflected over direct sound. As a genre, classical music relies on far broader recorded dynamic range—the difference delta between the wispiest pianissimo and the most brutal fortissimo—than compressed Pop that's been mastered for invariable loudness. Finally, the sheer scale and air-motion power of a 60-80-headed symphonic orchestra is perhaps best rendered by the open-backed hence doubled-up displacement surface of dynamic dipoles. Big sound warrants big artillery.

With Diesis Audio, you're assured that weaponry in very salonfähig dress code. These are open baffles you won't hesitate to bring home…