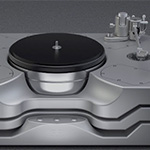 I first came across a particular concept of mechanical grounding with Swiss brand Goldmund. When I asked them how a mechanical diode could actually work—meaning as one-way drain without an open return path for vibrations entering the same way as those which leave—I was told about laminating materials in a specific sequence. One transitions from harder to softer materials in the direction of intended vibration attenuation. As it happens, I just came across the very same concept in Acoustical System's new Astellar turntable. "Our design brief was to transfer the relevant and unique design features of the extremely large and heavy Apolyt into a considerably more compact and feasible format without losing even the tiniest aspect of the sonic level provided."

Now look at how they describe their 36-layer turntable platter. "It incorporates 18 different materials with a defined energy transfer speed optimally sequenced. There's vinyl, tungsten HD18, titanium, AW6082 alloy, 1.4401 vanadium steel plus a defined mix of organic material layers laminated with natural resin." As I read that, the harder the material, the faster its transfer of mechanical energies. As materials get soft like rubber, they become more absorptive to slow down any remaining energy evacuation. Audio Group Denmark's Ansuz division is likewise strategic about laminating hard materials to accelerate and heighten the efficiency of mechanical resonance attenuation.

Does that mean that the ideal one-way spike—resonances drain from the speaker into the floor but none return—would start with a diamond layer on top, progress through various metals to ever softer materials on the way down then end in a rubber bumper which also protects the floor? How would one avoid deformation of the soft layers once such a spike bore considerable weight? As my techno-peasant brain without proper heatsinks ran uncomfortably hot envisioning solutions, I soon gave up under a cold shower. My sterling notion of a new super spike circled down the drain. I'll leave engineering to proper lab rats. I'll just write about it all and try to understand what I'm writing about. It's harder than it reads. Lots of mechanical resonance aka confusion remains.

Then there are solutions like G-Clef Acoustics' Babel from their Wellfloat range. It's described as "a pendulum structure of three small Wellfloat mechanisms across four layers which control vibrations down to the molecular¹ level. Conventional insulators are supported at 3 or 4 points. Babel is designed to install just one at the audio equipment's center of gravity like an SACD player's to realize ideal vibration processing." If I've read that right, Babel works as a resonance leech. Put a component atop one and it drains it of internal vibrations like a very thirsty vampire exsanguinates its victims. What will those clever Japanese think of next? Isolators for pianos to eliminate structural resonances? Never mind, Wellfloat already have those. Babel is the brainchild of company president Ryoji Nagata. Aesthetics were supplied by car designer Shiro Nakamura of GT-R and Fairlady Z fame at Isuzu and Nissan respectively.

Babel measures 175mm Ø, is 65mm tall, weighs just 2.9kg but can support up to 250kg! Audio Exotics in Hong Kong are most excited by its efficacy already. They honed in on how Babel released particularly dynamic nuances in their playback chain and did so at unexpected potency. I use multi-layer ball-bearing isolators and equivalent racks from HifiStay; racks by Artesanía Audio; and beneath my big 2×15" sound|kaos sub, Carbide Audio's hybrid footers combining ball bearings with viscoelastics. I've learnt that a reduction of structural resonances really cleans up the sound and opens up dynamic contrast. The basic MO I took away is that no matter how we accomplish it, less noise always equals more signal. It doesn't matter whether said noise is electrical, acoustical, mechanical or even time-based. Minimizing it in any of those domains always reaps sonic benefits. Various solutions simply differ in their effectiveness which relates directly to how big of a sonic gain they can net.
__________________________________

¹ Using Google Translator on a Japanese PDF, it seems that this device has a resonant frequency of 3Hz and damping characteristics that enable an anti-vibration ratio of 10 to the 16th power. Hence the 'molecular' level claim.