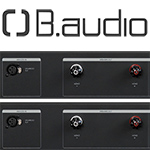 B.thy mono. So the laird said unto us. And so it was. [From the Gospel of Cédric & Sébastien Bermann.]

Whilst their 120wpc stereo amp can strap to 300-watt mono, today's B.audio amp does stereo only in pairs. To deliver its 300 watts into 8Ω and 500 into 4, it's monaural full time. It's also fully symmetrical so exclusively XLR and class AB with the familiar B.twist. Called IOD for intelligent output drive, a 6-transistor stage between initial voltage gain block and final bipolar current buffer applies local feedback in such a way that crossover distortion in the output stage is said to reduce below measurability. Like for Hegel's feed-forward correction engine, the implied promise is obviously class A 'always-on' sound without the heat. After all, a single-ended class A amp of 300wpc would be a hulk and sauna freak. Going push/pull and to a switching power supply à la LinnenberG or Aavik could shrink it. Still, heat management looms large. It's why biased for 30 class A watts, Burson's compact Timekeeper 3XGT mono runs a permanent fan. It's why green sensitivity prefers class AB. Just so that keeps checking the rearview mirror lest a class A amp with flashing lights in the fast lane fly past us on sonic purity. Quelle horreur. Actually – do French freeways wave the speed limit like some of Germany's Autobahn? Given B.audio's description of this mono amp, one presumes that their team in Saint Hippolyte would vote to make it so. Until the Élysée Palace does for actual roads and the French Bugatti super car, they already give us these high-power monos to rev it up on our sonic track. Power. High current. Direct-coupled speed. Broad bandwidth. No zero-crossing distortion for push/pull. No jaywalking tickets. No red-lined utility bill.

It does reads like a recipe for laissez les bon temps rouler, does it not? €24'900 lets you into the club.