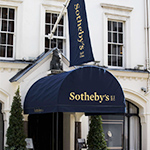 From a CNN article: "A Chinese vase expected to fetch €1'500 to €2'000 at auction sold for more than €9'000'000 after a bidding war between collectors… Jean-Pierre Osenat, president of the auction house, told CNN that the vase's owner who lives abroad asked the auctioneer to sell it as part of a consignment of items taken from their late grandmother's house in Brittany, northwestern France. "It's going to completely change their life" said Osenat."… but… "I have faith in the hammer, which is to say that I think the law of supply and demand determines the market price… the view of an expert can't outweigh that of 300 people. Sometimes in auctions you might see two or three people who mistakenly believe an item to be far more valuable than an expert said – but not 300"."

Majority rule applies in audio, too. Despite the bickering peanut galleries—proselytizing on imaginary rights and wrongs of doing hifi—how actual buyers vote with their wallets determines how our industry responds at large. If there's more demand for big passive £50K loudspeakers, someone will build them. If active monitors for more than €20K stop moving, supply will soon fade. It's also true that exposure impacts perception. We can't consider things we've not heard of. If large corporations not only own multiple brands but distribution chains, it's those brands and their tech which dominate public perception through sheer exposure in those markets. The same goes for advertisements. I remember a French non-audiophile once asking me about Devialet. He knew nothing about the brand other than its existence; because he'd seen their big billboards in the metro stations of Paris.

Influence matters. It could be word of mouth, sheer visibility—"everywhere I go I see iPhones"—celebrity endorsements, craftily placed ads or feedback on blogs, vlogs, websites and print media, strategic product placement in popular TV shows. Though John Darko and I hate the current idea of the influencer, there's no denying. The audio press exerts an influence. Any publisher is aware. Our choice of what to shine a light on inside our super-limited exposure window helps shape said influence. And, what goes for consumers goes for publishers. We can only (consider to) report on what we've heard of even if just in passing. Enter self promotion. Some companies are better at telling a compelling story and beating their own drum than others who believe that good product speaks for itself, end of. To brag or not to brag is the question.

Giving the glut of competing products and brands, I suggest that the answer should be self-evident. Do make a noise. Don't risk being overlooked or underestimated just because we don't know. Come auction day where bids are placed, knowing or not knowing can make a huge difference. I thought of that the other days when I had Monitor Audio's chief acoustical engineer Michael Hedges on a Zoom call. Until then I'd no idea how sophisticated their in-house engineering is. It's on par with big boys in whose company the Monitor Audio brand never gets mentioned even once. The way I look at that, blowing one's own horn now needs some most vigorous practice. Tadaaah!

Richard Wagner: "I wish I could score everything for horns." Who says you can't?