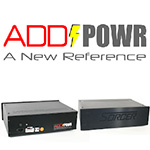 Today this isn't shorthand for attention deficit disorder. Instead it's algorithm digital defined. And, it's applied to AC power. But reading its meager descriptions could lead to the other form of ADD.

Remember Bill Stierhout? He was the inventor of QRT Quantum Resonance Technology which he sold to to Nordost in 2008. There it continues to be very successfully marketed in various products to this day. It also inspires current Ansuz analog dither since Lars Kristensen brought the Nordost QRT legacy to his new team at Aavik, Ansuz & Børresen. But that doesn't yet end QRT's victory lap. Say hello to Bill's company Add-Powr. Once again his products are described as harmonic resonators not AC conditioners. They work in parallel not series so nothing plugs into them. They just plug into a spare outlet, preferably one in the wall. What do they do there? Via conduction or radiation, they induce deliberate ultra-low-frequency or ULF electromagnetic fields and harmonics into our AC. Bill's add-on components start at $149 for the eau2 and top out at $4'000 for his Sorcer X4.

It's intuitive to question why anyone would deliberately want to inject EM fields which typically occur as ultrasonic 100kHz-3GHz radio-frequency interference. But the Add-Powr fields occur in the opposite range of infrasonics well below the audible bandwidth and with negligible current to be very weak. They become the carrier upon which propagate Bill's three ULF algorithms which sit at the heart of algorithm digital defined. They are "complex low-frequency signals of a specific oscillation pattern". Due to their infrasonic nature, the power supplies of our audio/video gear won't filter them out. They pass right through our audiophile filter stages to become part of our kit's DC reference voltage.

The associated video on the site shows how rapidly the nine green LED flash, presumably to trigger the algorithmic pulses.

Where the presentation gets hobbled is by failing to explain why this low-power additional harmonic content in our DC reference voltage has audible benefits. Like Schumann resonance devices, one must listen to decide. In this case, we're only told that with this QRT-evolved tech, the signal emanating from our loudspeakers will be 1-2dB louder. It's offered as proof that this tech adds energy.

We've seen it with Franck Tchang's original acoustic resonators, Synergistic Research's versions, Jack Bybee bullets, Holger Stein tweaks. We've seen it with cable lifts, CDs bathed in blue light and seemingly New Age products whose inventors either didn't know how they worked—only had pragmatic evidence that they did—or refused to explain it. Such refusal could be based on protecting intellectual property. It could be to avoid voodoo claims should popular science not provide an accepted conceptual frame work to go with. For his LessLoss Blackbody for example, Louis Motek does provide a theoretical framework. To many, its cosmic connections will simply seem too far out. Now a best attempt at suggesting a device's MO backfires to paint it in bright voodoo colors all over again. Damned if you do, damned if you don't.

In the end, shouldn't pragmatism win? If something—really anything—has a demonstrable effect, must we first understand its physics or chemistry to enjoy the effect? Must we be a chef to enjoy a good meal, a doctor to benefit from a proper medical diagnosis and attendant prescription? I don't really understand how Franck Tchang's resonators work. I just have a basic grasp over how to use them and a clear sense that I wouldn't want to be without their effect. As an end user, that's enough. It tends not to be if one sells and promotes such devices. Now people expect explanations. They want conceptual proof that it really could work as claimed because in their heads, it has already added up. Only now will they accept to try it.

Such proof-first-try-later thinking misses many valid discoveries. It's really backwards. To move forward, our attitude must be that only personal trial is real proof. If hard or vague explanations follow, they're the swanky drizzle or stale parsley garnish. We already had the properly calorific main course.